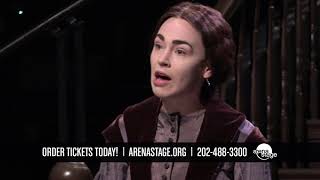 “This is juicy high-toned melodrama.”

The Heiress is generously sponsored by Barbara and Arthur Bushkin, Daniel Korengold and Martha Dippell and

and Ilene and Steven Rosenthal.

Finding one’s voice is never easy. Socially awkward and plain Catherine Sloper has struggled her entire life under the disapproving and resentful gaze of her father. It is the unexpected visit from a suitor full of sincerity and instantaneous devotion that awakens Catherine’s long abandoned hopes of true love and the opportunity for a fresh start. A devastating betrayal forces the scorned Catherine to learn how to roar, realize her truth and take control of her destiny.

The Heiress runs approximately two hours and 55 minutes with one 15-minute intermission.

LISE BRUNEAU (Mrs. Montgomery) is happy to return to Arena Stage after appearing in Watch on the Rhine, Mother Courage and Karen Zacarias’ Legacy of Light. Recent credits include Broadway’s The Cherry Orchard (Roundabout) and Sweat for A.C.T. San Francisco. D.C. appearances include Hamlet and Othello (Shakespeare Theatre Company), Broken Glass and Brighton Beach Memoirs (Theater J, Helen Hayes nomination) and This (Round House). For Denver Center, she was Hesione in Heartbreak House (Henry Award). As a director, she’s helmed productions for MetroStage, Clarence Brown Theatre, the Riot Grrrls and Taffety Punk. Regionally, she has appeared at Cleveland Playhouse, The Globe, Seattle Repertory, The Wilma, Berkeley Repertory and many Shakespeare festivals. Lise trained at RADA and is proud to be a Taffety Punk.

LORENE CHESLEY (Marian Almond) is thrilled to be back at Arena Stage! A native of the Washington, D.C. metropolitan area, Lorene grew up studying ballet and tap, but quickly segued her love for performance into acting. Stage credits include Valerie Johnston in Smart People (Arena Stage), The Flame/Ms. Caliente in The Villians' Supper Club (Merrimack Repertory Theatre), Cassandra in The American Woman (Pasadena Playhouse) and Delilah in Memphis (La Jolla Playhouse). TV credits include Perception (TNT), Shameless (Showtime) and The Fosters (Freeform). This fall she released her first book The Perfectly Imperfect Christian (Amazon.com), praise! She studied theater at Temple University and earned an M.F.A. in acting at UCSD. Lorene would like to thank God for her many blessings, and her family and friends for their continual love and support!

LAURA C. HARRIS (Catherine Sloper) is making her Arena Stage debut. Previous Washington, D.C. credits include Kings, Cloud 9, Time Stands Still, Bachelorette and Red Speedo at Studio Theatre; The Flick and Tender Napalm at Signature Theatre; NSFW, Seminar, Amadeus, Young Robin Hood and 26 Miles at Round House Theatre; Vicuna at Mosaic Theater; Awake and Sing! at Olney Theatre Center; Love and Information, Passion Play, World Builders and Amazons and Their Men with Forum Theatre; Our Class at Theatre J; The Winter’s Tale and The School for Scandal at Folger Theatre; and An Experiment with an Air Pump with Potomac Theatre Project, along with extensive on-camera and voiceover work. Laura is a graduate of Middlebury College. www.lauracharris.com

NANCY ROBINETTE (Lavinia Penniman) has appeared at Arena Stage in Ah Wilderness!; The Avenger's Comedie; Death of a Salesman; Well; You Nero; Blithe Spirit; The Women; Lovers and Executioners; For the Pleasure of Seeing Her Again; and Christmas Carol 1941. Most recently in Washington she was in Everything is Illuminated at Theatre J, John at Signature Theatre and Comedy of Errors at the Shakespeare Theatre, where she is an affiliated artist. Regionally she has appeared at Old Globe, Paper Mill, Williamstown, New York Theatre Workshop, Roundabout, Key West Waterfront and McCarter theaters. She appeared on Broadway in The Curious Incident of the Dog in the Nighttime. TV credits include Louie and Homicide. Films credits include Serial Mom, Soldier Jack, Three Christs, The Hunley and The Day Lincoln Was Shot. Last year she received The Helen Hayes Tribute.

KIMBERLY SCHRAF (Maria) is delighted to return to Arena Stage, where she also appeared in Ah, Wilderness! and The Women. Other D.C. appearances include Death of a Salesman and The Laramie Project at Ford’s Theatre; Vicuña and the American Epilogue and Oh, God at Mosaic; Measure for Pleasure and The Gigli Concert at Woolly Mammoth; Angels in America and Show Boat at Signature; Skylight, Frozen and all four of The Apple Family Plays at Studio; and Our Town and A Prayer for Owen Meany at Round House. As co-director of the Honors Conservatory at the Theatre Lab, she prepares adult actors for professional theater work, and as a Steering Committee member of Actors Arena, she helps to program workshops and roundtable discussions to enrich and deepen the acting craft of seasoned professionals.

JAMES WHALEN (Dr. Austin Sloper) last appeared at Arena as William Marshall in The Little Foxes. His most recent D.C. area appearances include Small Mouth Sounds (Round House Theatre) and True West (Rep Stage). He has also performed locally with The Kennedy Center, Olney Theatre Center, Everyman Theatre, Mosaic Theatre, Shakespeare Theatre Company and Theatre J. Regionally he played Dracula at Actors Theatre of Louisville. Some of his favorite TV and film credits include House of Cards, VEEP, I Love You But I Lied, Money Matters and A Beautiful Mind.

NATHAN WHITMER (Arthur Townsend / The de Rhams’ Coachman) is proud to be making his Arena Stage and Washington, D.C. debut! In New York he worked Off-Broadway with both Marvell Repertory Theatre and Titan Theatre Company. Regional credits include Love’s Labor’s Lost, Macbeth and The Comedy of Errors (The Old Globe Theatre); A Christmas Carol, ACE and Reckless (Cincinnati Playhouse in the Park); Robert in Company (Heritage Theatre Festival in Charlottesville, VA); Texas Shakespeare Festival; Fairbanks Shakespeare Festival; and over 20 productions with Barter Theatre in Abingdon, VA, where he was a resident company member. Nathan lives with his wife, actor Emelie Faith Thompson, and their young daughter, Violet, in northern Virginia. MFA: The Old Globe/USD; BFA: Ohio University. Instagram: @actornate www.nathanwhitmer.com

RUTH & AUGUSTUS GOETZ (Playwrights) collaborated on many Broadway plays, such as Franklin Street (1940); One Man Show (1945); The Heiress (1947), which was loosely suggested by Henry James’ novel Washington Square; The Immoralist (1954), an adaptation from the novel by Andre Gide; and The Hidden River (1957), an adaptation of a novel by Storm Jameson. The Goetzes also collaborated on the following films: The Heiress (Academy Award, 1949), Sister Carrie (1950), Rhapsody, Trapeze and Stagestruck. Mrs. Goetz is the sole author of two plays: Sweet Love Remembered (1959), written after her husband’s death in 1957, and Madly in Love (1963). The Goetzes were active members of the Dramatists Guild. Their daughter, Judy Firth Sanger, is a poet and frequent reference source for productions of The Heiress. Their granddaughter, Katie Firth, is an actress working in New York.

SEEMA SUEKO (Director) joined the Arena Stage staff in July 2016 as deputy artistic director and has since directed The Price and Smart People at Arena. She previously served as associate artistic director at The Pasadena Playhouse and executive artistic director of Mo`olelo Performing Arts Company. Her directing and acting credits include Denver Center, The Pasadena Playhouse, People’s Light, The Old Globe, San Diego Repertory, Yale Repertory, 5th Avenue Theatre and Native Voices, among others. As a playwright, she received commissions from Mixed Blood Theatre and Center Stage. Her work has been recognized by the California State Assembly, NAACP San Diego, Chicago Jeff Awards, American Theatre Wing and American Theatre magazine. Seema developed the Consensus Organizing for Theater methodology, has done research on the neuroscience of acting and serves on the Diversity Committee of the Stage Directors and Choreographers Society.

MIKIKO SUZUKI MACADAMS (Set Designer) designed for Arena Stage’s The Little Foxes and is happy to be back at Arena! Her work has been seen at Guthrie Theater, Berkeley Rep, Old Globe, Oregon Shakespeare Festival, Long Wharf Theatre, Seattle Rep, Actors Theatre of Louisville, Yale Repertory Theatre, Cincinnati Playhouse, Cornerstone Theater Company and Opera Theatre of St. Louis, among others. Her Off-Broadway credits include Working Theater, Epic Theatre Ensemble, INTAR, Ensemble Studio Theatre and the National Asian American Theatre Company. She also designed the recent U.S. national tour of Dirty Dancing and in Japan at the Nissay Opera, Nikikai Opera, Kanagawa Kenmin Hall, Aichi Triennale and more. As an associate scenic designer, recent Broadway credits include My Fair Lady, Fiddler on the Roof and The King and I. She teaches at Rutgers University.

EMMA WILK (Sound Designer & Original Music) is a New York-based sound designer and collaborator. She is very excited to be working at Arena for the first time! Her designs have been heard at numerous New York theaters, including The Public, New World Stages, La MaMa, 59E59 and HERE. Some of her favorite designs were A Clockwork Orange, Bright Half Life, Machinal, The King Stag, The Crucible and Gorey: The Secret Lives of Edward Gorey. She has worked regionally in Connecticut, New Jersey, upstate NY, Idaho and Nebraska. Associate/assistant designer highlights include, on Broadway: Long Day’s Journey Into Night, Heisenberg and The Lyons; and Off-Broadway: Hamlet, Pass Over, What’s It All About and Fun Home. She is a graduate of Vassar College. Emmamwilk.com.

JOSEPH SMELSER (Replacement Stage Manager) is thrilled to return to Arena Stage where he last served as production stage manager on Anna Deavere Smith’s Let Me Down Easy. He is currently the resident production stage manager at the Shakespeare Theatre Company where he has managed 30 productions including Hamlet, Camelot and the upcoming Oresteia. Other work includes eight seasons at Seattle Rep and four seasons at ACT in San Francisco. He toured productions of Let Me Down Easy and Twilight: Los Angeles, 1992 (both with Anna Deavere Smith) and the first national tour of Proof.

MARNE ANDERSON (Assistant Stage Manager) is excited to be at Arena Stage for her 10th season, starting as an Allen Lee Hughes Fellow in 2009. Some highlights include Indecent, Dave, Two Trains Running, The Great Society, Nina Simone: Four Women, A Raisin in the Sun, Moby Dick, All the Way, Erma Bombeck: At Wit’s End, King Hedley II, Five Guys Named Moe, Mother Courage and Her Children, The Mountaintop, Metamorphoses, Long Day’s Journey into Night, Arabian Nights, Duke Ellington’s Sophisticated Ladies. She is a graduate of the University of North Carolina School of the Arts and a proud member of Actors’ Equity Association. 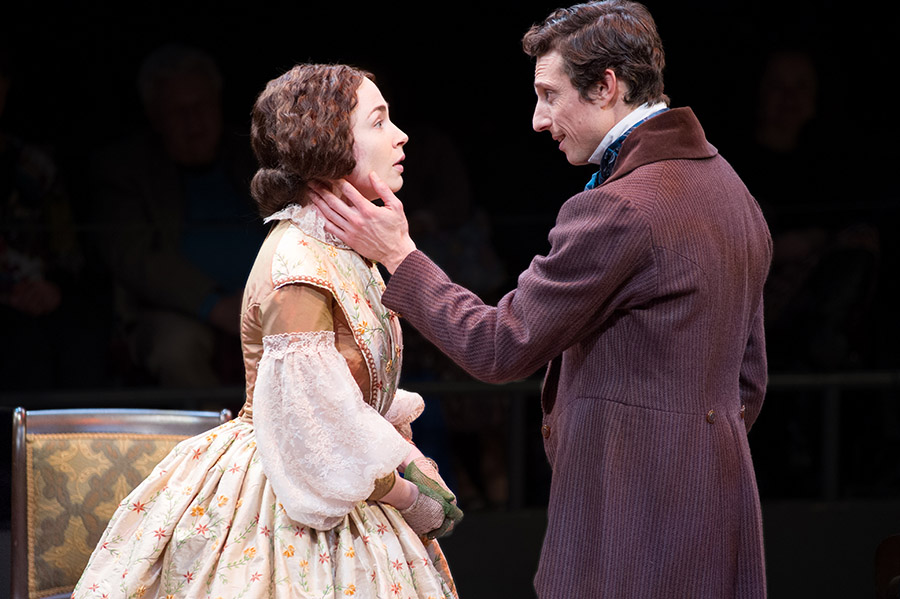 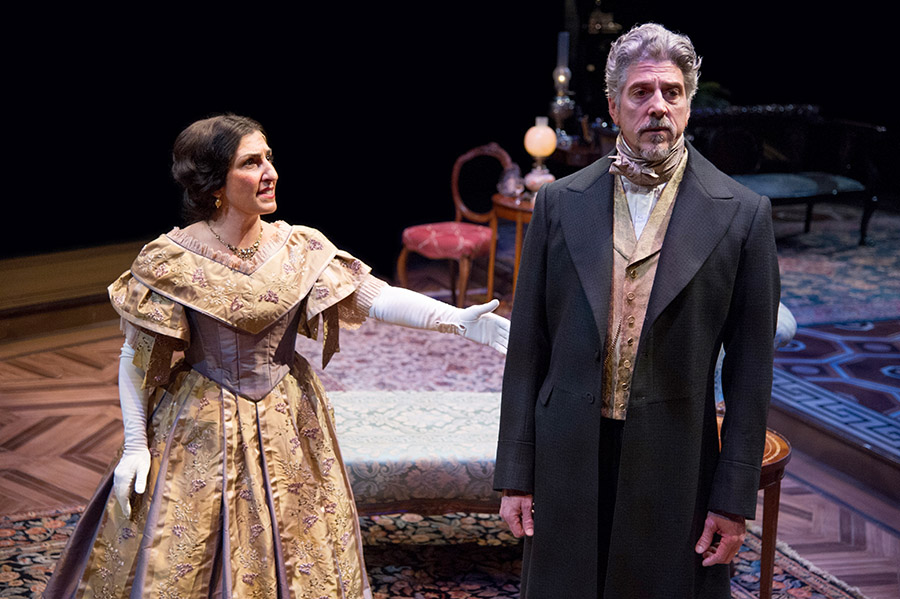 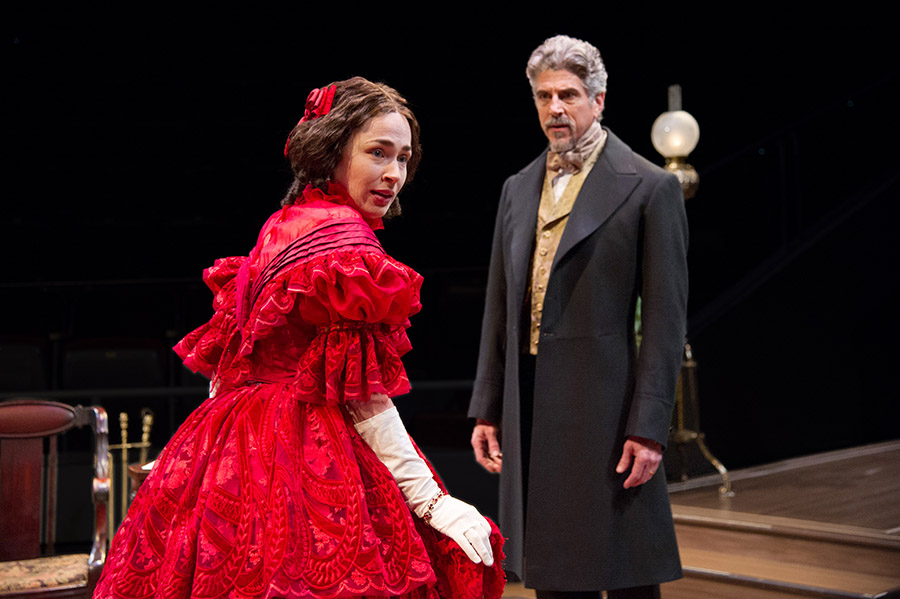 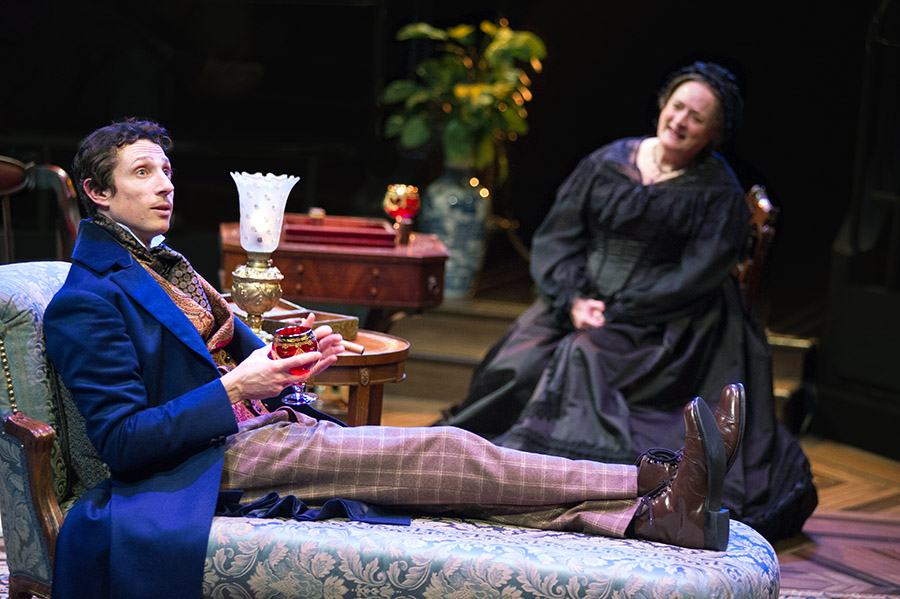 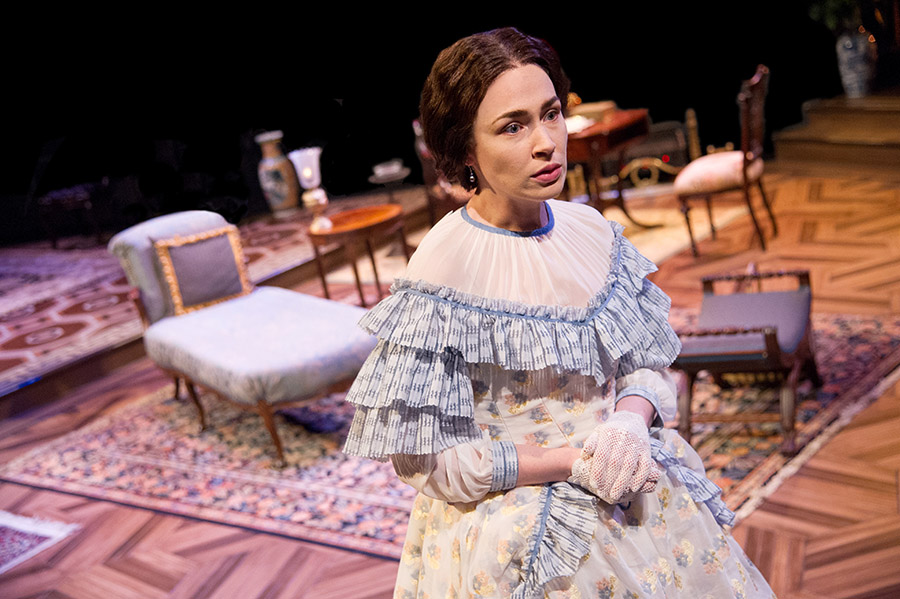 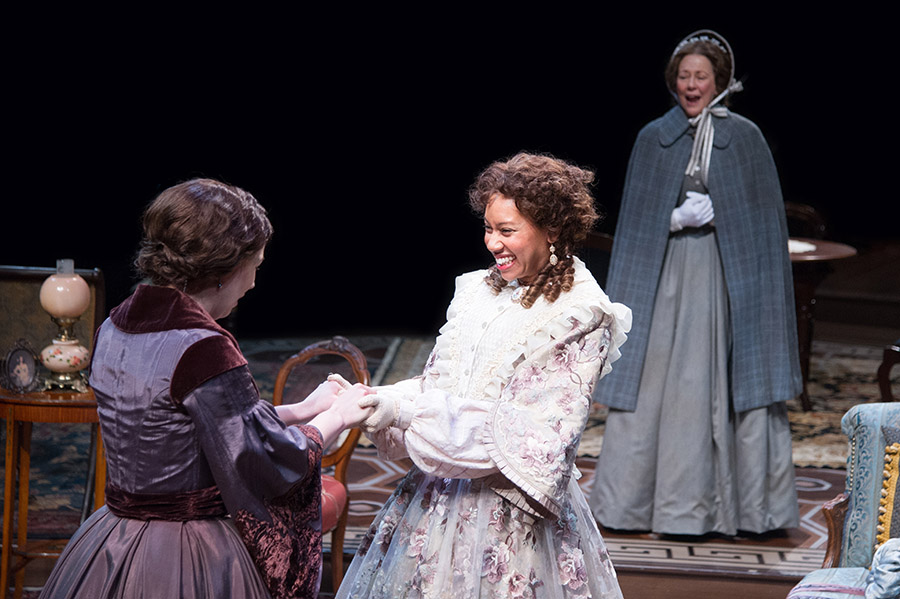 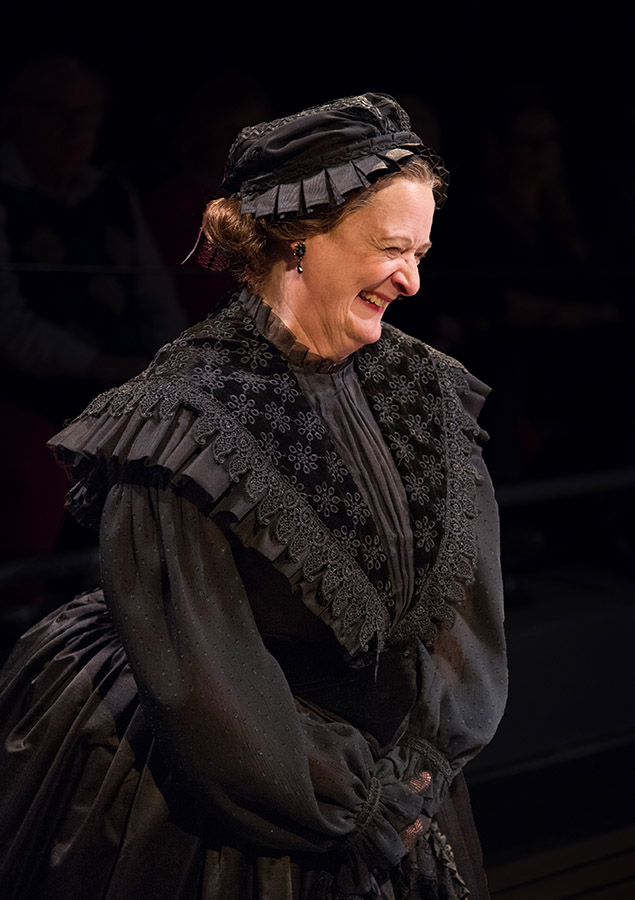 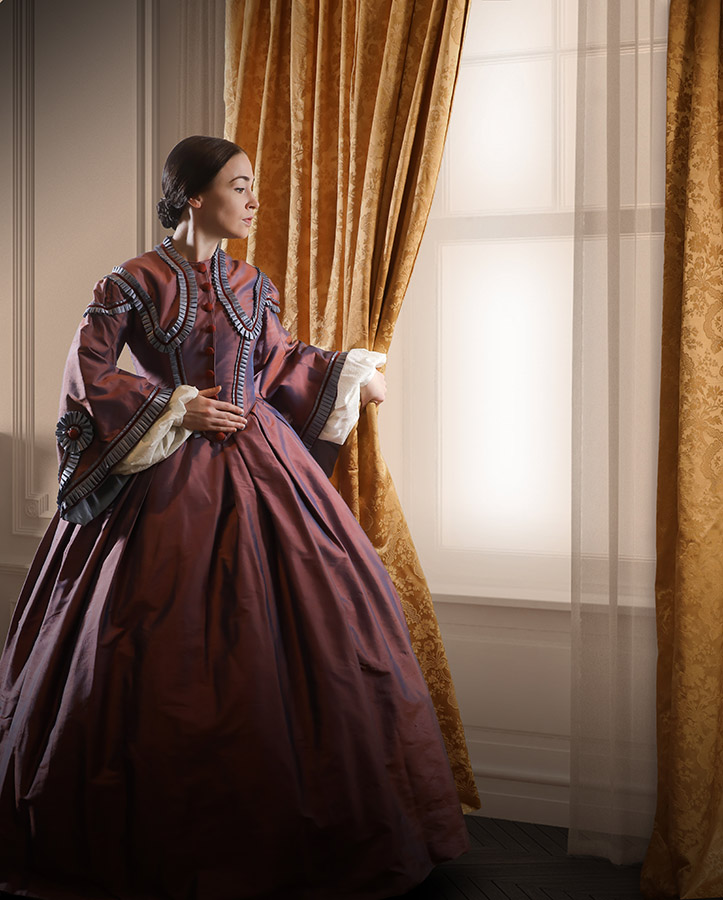 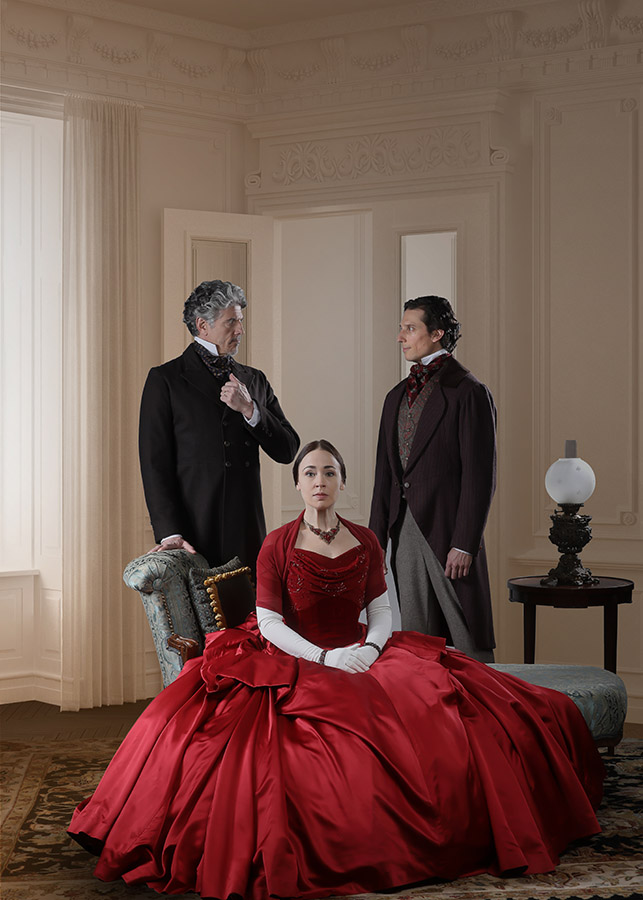 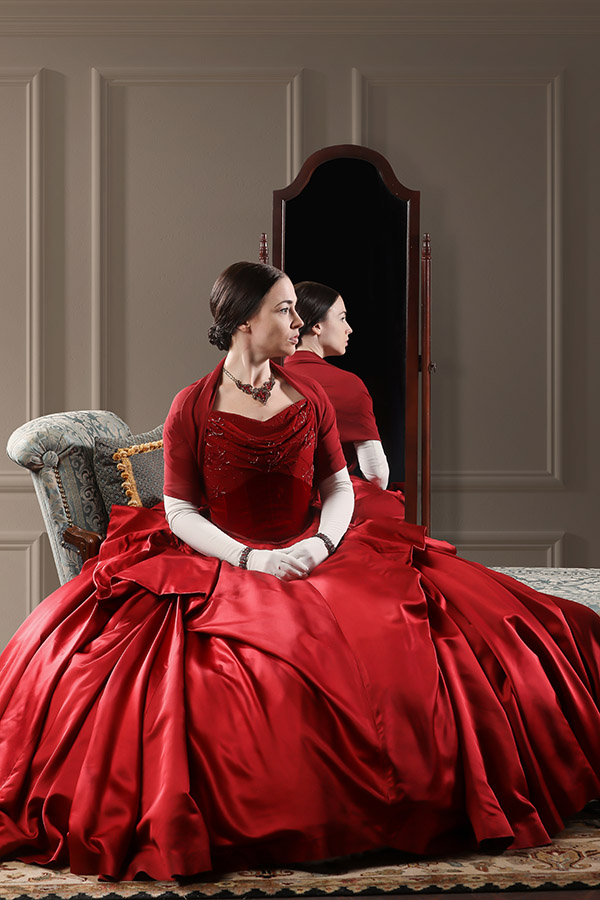 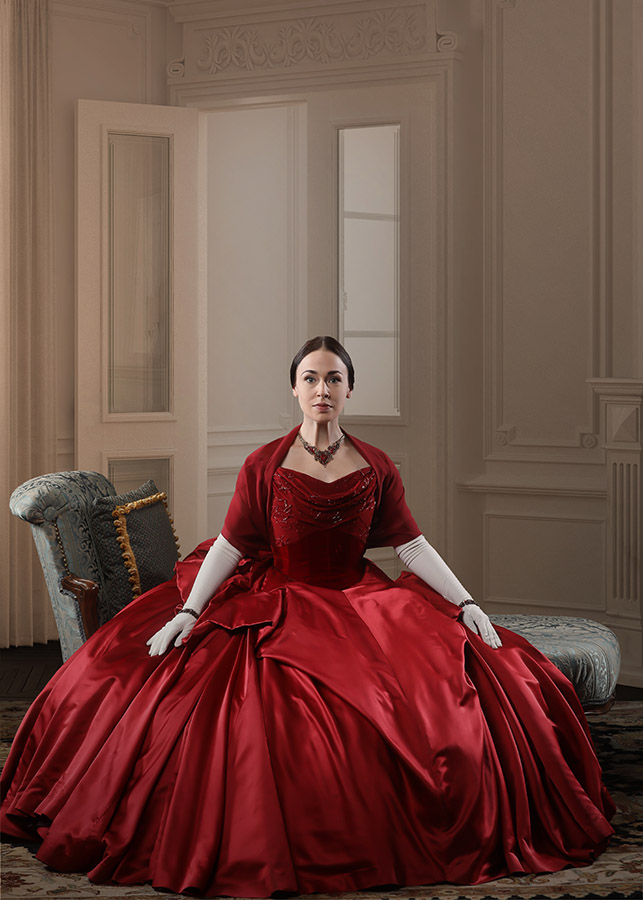 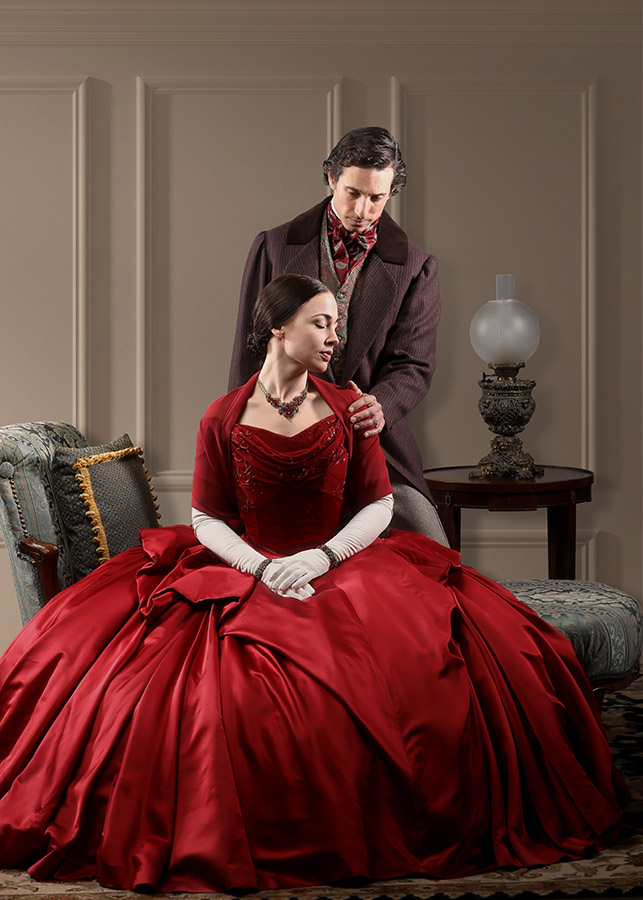 Costume design plays a major role in The Heiress

Seema Sueko shares the background on this portrait of courage

Nancy Robinette triumphs as Aunt Lavinia in The Heiress

The Heiress named in top things to do this weekend

The Heiress dissects the psyche of a woman on the verge

'A Quick 5' with Jonathan David Martin

Rich acting pays off in The Heiress, a surprisingly timely classic at Arena Stage

First look at The Heiress at Arena Stage

Seema Sueko on directing the “revolutionary thriller of the heart”, The Heiress

Jonathan David Martin talks The Heiress and his life in theater

The Heiress mentioned in 12 things to do this week

Kimberly Schraf talks working as an actress, training others and The Heiress

Full cast and creative team announced for The Heiress

Arena Stage looks into history for inspiration in 2018/19 season

The 69th lineup at the Washington, D.C. venue will also include the a cappella musical Jubilee and Junk.