It's 1980s Cuba and the revolution has reached a crazed tipping point. Fueled by a stagnant economy, 10,000 citizens have fled to the Peruvian Embassy in Cuba seeking asylum. As Fidel Castro grapples between his desire to maintain power and do what is best for his country, he turns to his closest confidant and political partner, Celia Sánchez for answers. What kind of a leader is he? Merciful or mighty? Imbued with magical realism, Eduardo Machado’s Celia and Fidel — Arena Stage’s seventh Power Play — imagines a fight between Cuba’s most influential female revolutionary and its most notorious political leader.

Additional support provided by the

Celia and Fidel is a fictional play inspired by historic events.

MARIAN LICHA (Celia Sánchez) is excited about the Celia and Fidel comeback. She was last seen at Arena Stage as Sister Sonia in Destiny of Desire and as Ofelia in Anna in the Tropics. Other favorite roles include, How the Garcia Girls Lost Their Accents (Round House Theatre), Ana en el Tropico and The House of Spirits (Gala Theatre). Select Regional and Off-Broadway credits include The Kennedy Center, Provincetown Playhouse, TOMI Theatre, Repertorio Espanol in NYC and The Capital Fringe Festival. She continues to tour with Frida Vice-Versa, a one-woman show. Some TV and film credits are Homicide, Step Up 2, Americanish and Comedy Central’s Lost in Pronunciation. She’s a proud member of EQUITY and AFTRA/SAG and the mother of two beautiful children. marianlicha.com. Instagram: @Marianlicha11.

ANDHY MENDEZ (Fidel Castro) most recently appeared on stage as Ramoncito in the world premiere of The Cubans at the Miami New Drama/Colony Theatre in Miami, FL. Other theater credits include Davenant’s Macbeth and Timon of Athens at the Folger Theatre in Washington, D.C.; the world premiere of Confessions of a Cocaine Cowboy at Miami New Drama/Colony Theatre; Shakespeare in Love at Cleveland Playhouse; and Hamlet: Prince of Cuba at Asolo Rep, with full performances in English and Spanish. Select NY credits include Daughter of the Waves, Sotto Voce and the world premiere of Strawberry and Chocolate. On film and television, Andhy will be in the upcoming feature film, Scrapper, and has appeared on many television shows including Bull, Chicago PD, Blacklist and Orange Is the New Black.

LIAM TORRES (Manolo Ruiz) is an actor, activist and teaching artist for Manhattan Theatre Club in New York. He is thrilled to be working with Molly Smith and Arena Stage. Liam has appeared in several Eduardo Machado plays, including: Mariquitas, Paula and Havana Journal at Theatre for the New City. His New York credits include: Mark in Intar’s Locusts Have No King, Lobster Face, Fit, The Hologram Theory, The Last Castrato and The Marital Bliss of Francis & Maxine with Fay Simpson. Regional credits include: Anna in the Tropics at SpeakEasy in Boston; Sleepwalkers at Alliance Theatre in Atlanta; and Better at Pinter Studios in London. Film credits include: Lauren Fritz’s film Kabul, The Wounded and the Slain, Rover and Zoowith Jermaine Hopkins.

EDUARDO MACHADO (Playwright) was born in Cuba and came to the United States when he was nine. He is the author of over 40 plays, including The Cook, Havana is Waiting, The Modern Ladies of Guanabacoa, Fabiola, Broken Eggs and Stevie Wants to Play the Blues. His plays have been produced at Seattle Repertory, The Goodman, Hartford Stage, Actors Theatre of Louisville, Mark Taper Forum, Long Wharf, Hampstead Theatre in London, The Cherry Lane Theatre, Theater for the New City and Repertorio Español, among many others. He was formerly artistic director of INTAR Theatre in NY and has been a Professor of Playwriting at NYU Tisch and Columbia. He is the co-author of Tastes Like Cuba: An Exile’s Hunger for Home and his plays are published by Samuel French and TCG.

MOLLY SMITH (Director) has served as Artistic Director since 1998. Her more than 30 directing credits at Arena Stage include large-scale musicals, like Anything Goes, Disney’s Newsies, Carousel, Fiddler on the Roof, Oklahoma!, My Fair Lady, The Music Man, Cabaret, South Pacific; new plays, like Sovereignty, The Originalist, Camp David, Legacy of Light, The Women of Brewster Place, How I Learned to Drive; and classics like Mother Courage and Her Children, A Moon for the Misbegotten, The Great White Hope and All My Sons. Her directorial work has also been seen Off-Broadway at 59E59 in New York, Portland Center Stage, Canada’s Shaw Festival, The Court Theatre, The Old Globe, Asolo Repertory, Berkeley Repertory, Trinity Repertory, Toronto’s Tarragon Theatre, Montreal’s Centaur Theatre and Perseverance Theater in Juneau, Alaska, which she founded and ran from 1979-1998. Molly has been a leader in new play development for over 40 years. She is a great believer in first, second and third productions of new work and has championed projects, including Dear Evan Hansen; Next to Normal; Passion Play, a cycle; and How I Learned to Drive. She led the re-invention of Arena Stage, focusing on the architecture and creation of the Mead Center for American Theater and positioning Arena Stage as a national center for American artists through its artistic programming. During her time with the company, Arena Stage has workshopped more than 100 productions, produced 39 world premieres, staged numerous second and third productions, and been an important part of nurturing nine projects that went on to have a life on Broadway. In 2014, Molly made her Broadway debut directing The Velocity of Autumn, following its critically acclaimed run at Arena Stage. She was awarded honorary doctorates from American University and Towson University. In 2018, she was honored as Person of the Year by the National Theatre Conference and inducted into the Washington DC Hall of Fame. In 2020, she was awarded the Director of Distinction in Cairo, Egypt, from the Academy of Arts. During the COVID-19 pandemic in 2020, she developed the concept for two online films, May 22, 2020 and The 51st State, overseeing the production direction as well as directing pieces within the films. She also spearheaded a variety of other new online content, including a weekly talk show Molly’s Salon, during the live performance hiatus.

VICTOR VAZQUEZ, CSA (Casting) is a casting director in New York City. He is the founder of XCasting (xcastingnyc.com) and sits on the national board of the Casting Society of America.

JOCELYN CLARKE (Dramaturg) is Senior Dramaturg at Arena Stage in Washington, D.C. He was Theatre Advisor to the Arts Council of Ireland for ten years.  As a dramaturg, Clarke has worked with writers such as Katori Hall, Taylor Mac, Lydia Diamond, Abhishek Majumdar, Eduardo Machado, Charles Randolph Wright, Lisa Kron, Craig Lucas, Carl Hancock Rux, Mary Kathryn Nagle, Tanya Saracho, and Karen Zacarias. He was a script editor on several Irish films, including Young Offenders, and was executive story editor on all three seasons of the BBC/RTE TV series Young Offenders.   He is a writer on the second season of P-Valley, Katori Hall’s acclaimed TV series for Starz.  His new adaptation of Elizabeth Swados’ musical The Beautiful Lady, will be directed by Anne Bogart at La Mama Theatre in New York in May 2022. 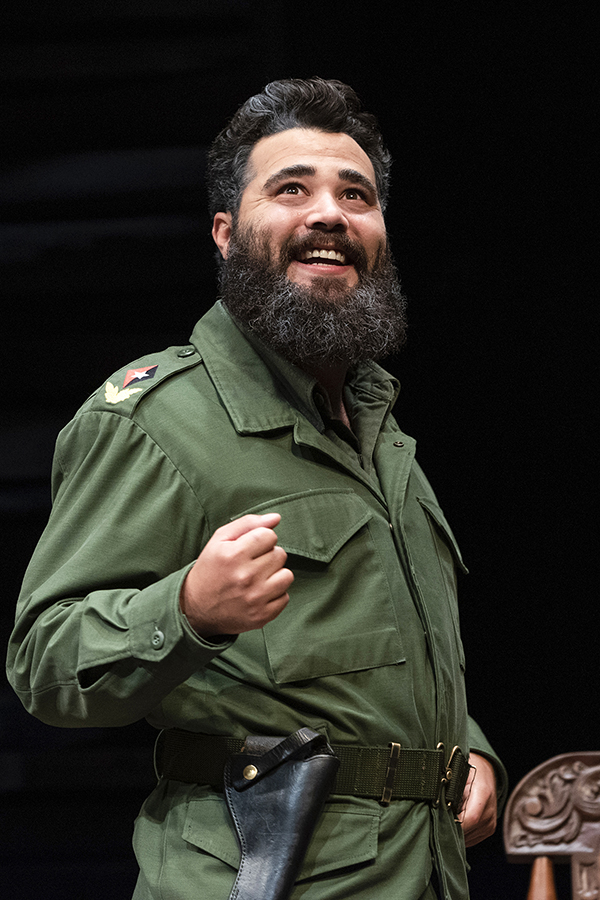 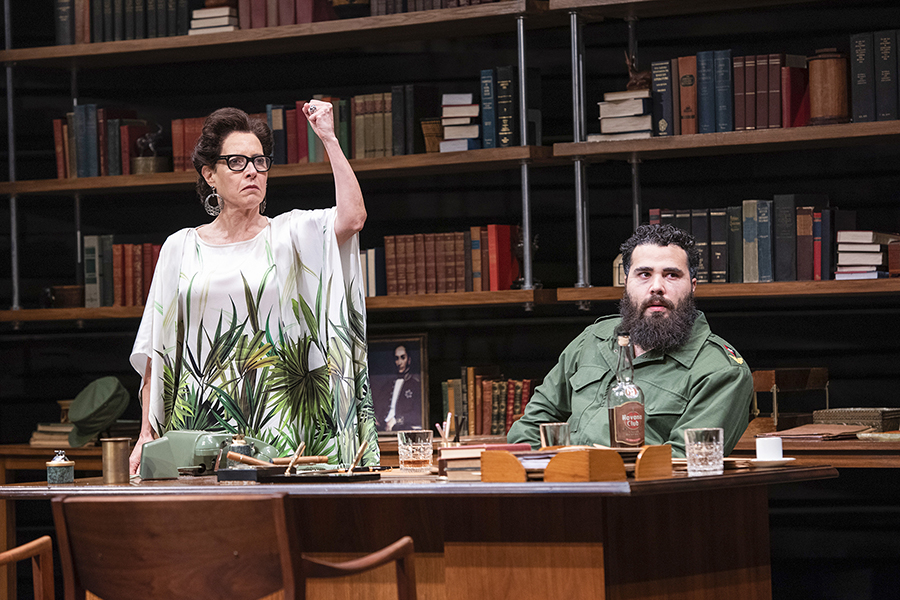 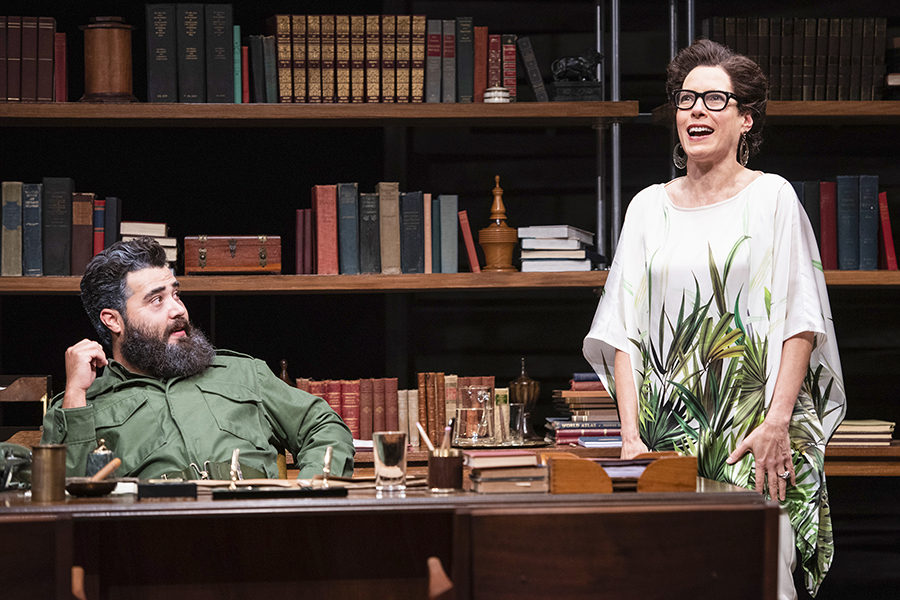 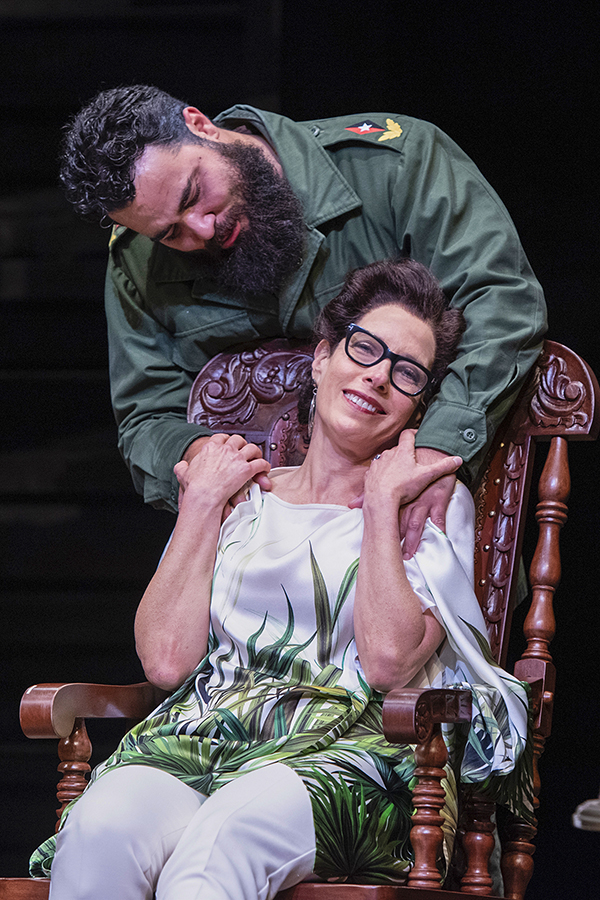 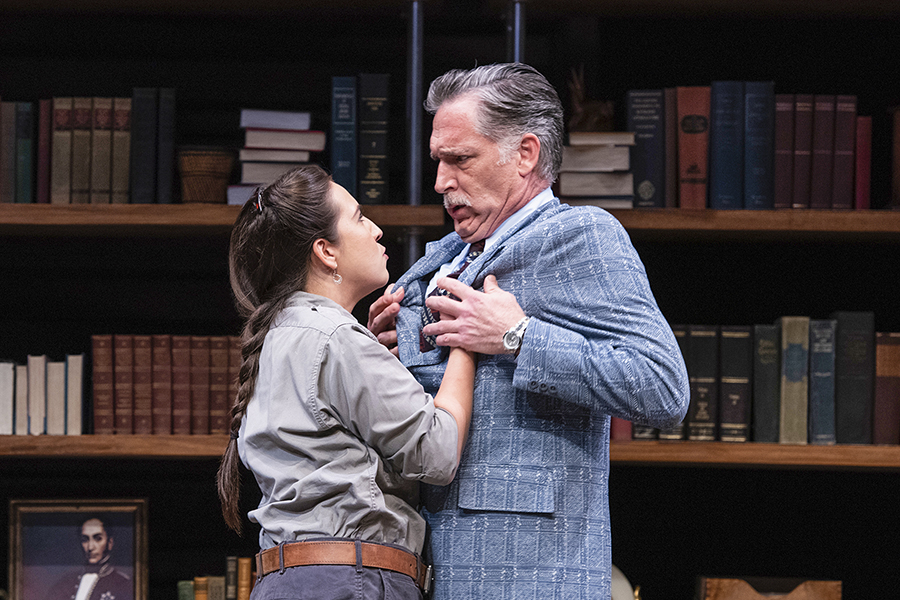 Photo of Heather Velazquez and Liam Torres by Margot Schulman. 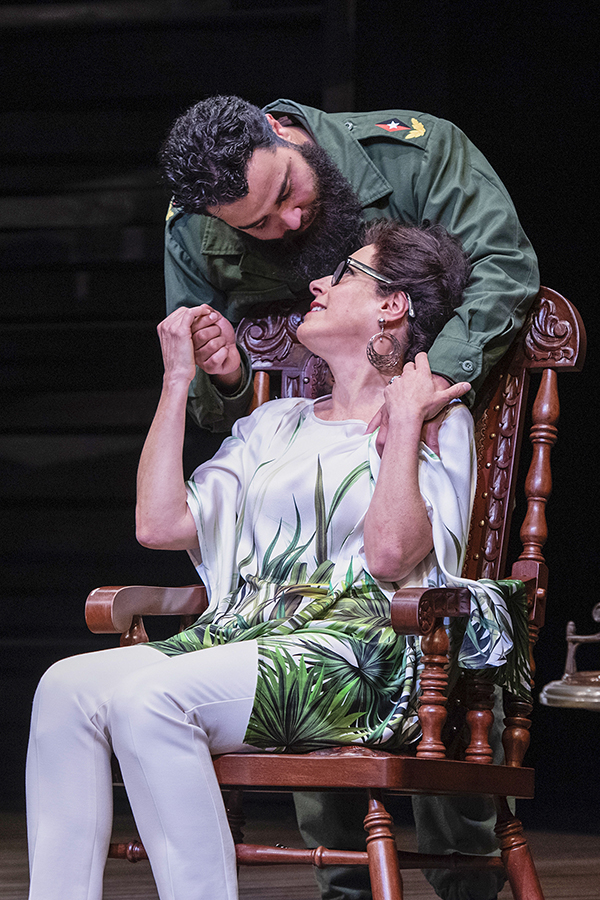 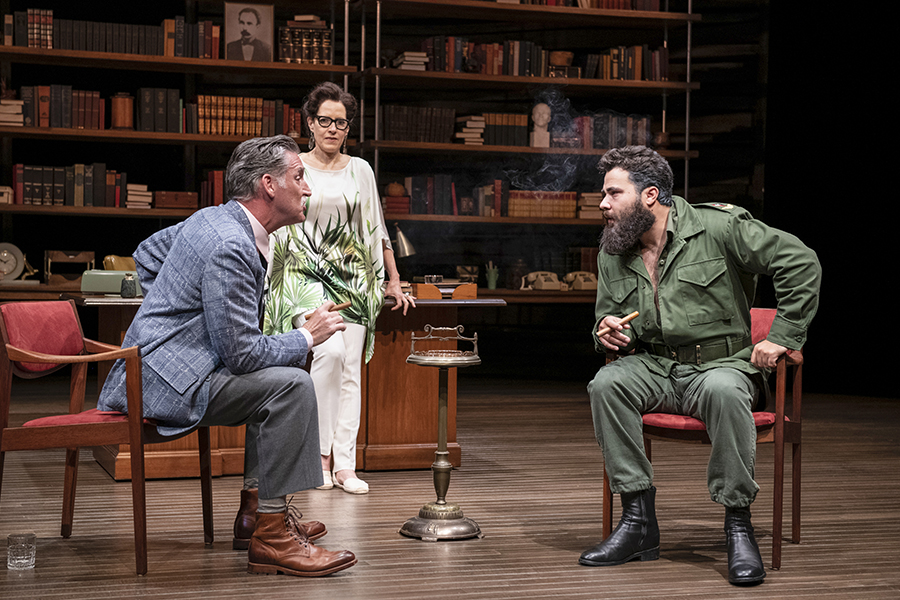 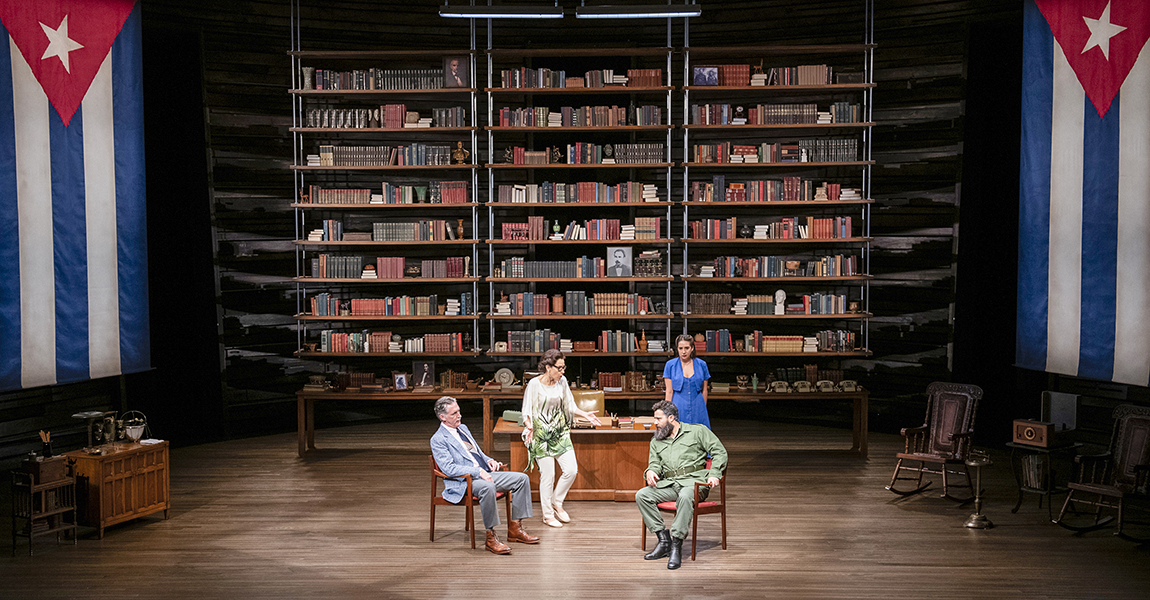 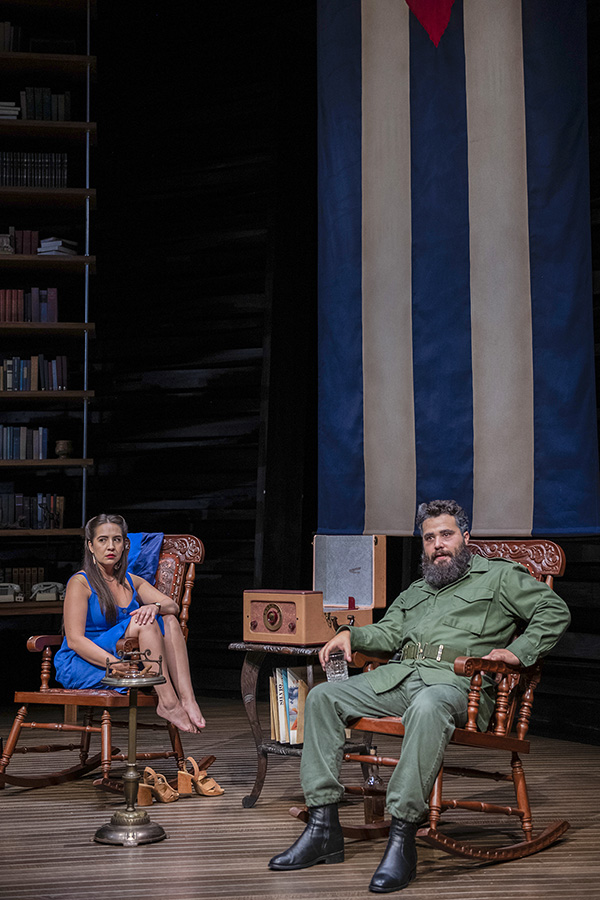 Photo of Heather Velazquez and Andhy Mendez by Margot Schulman. 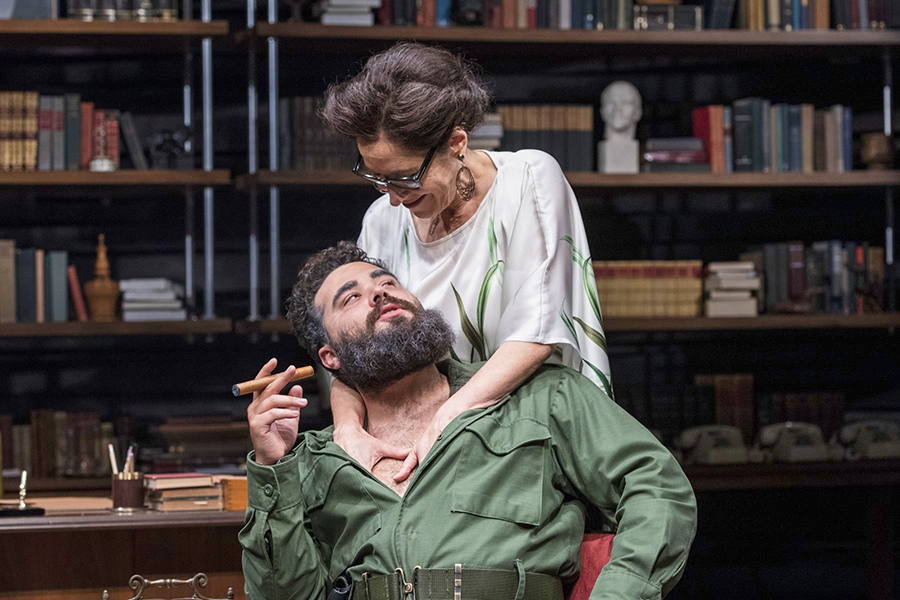 Photo of Andhy Mendez and Mirian Licha by Margot Schulman. 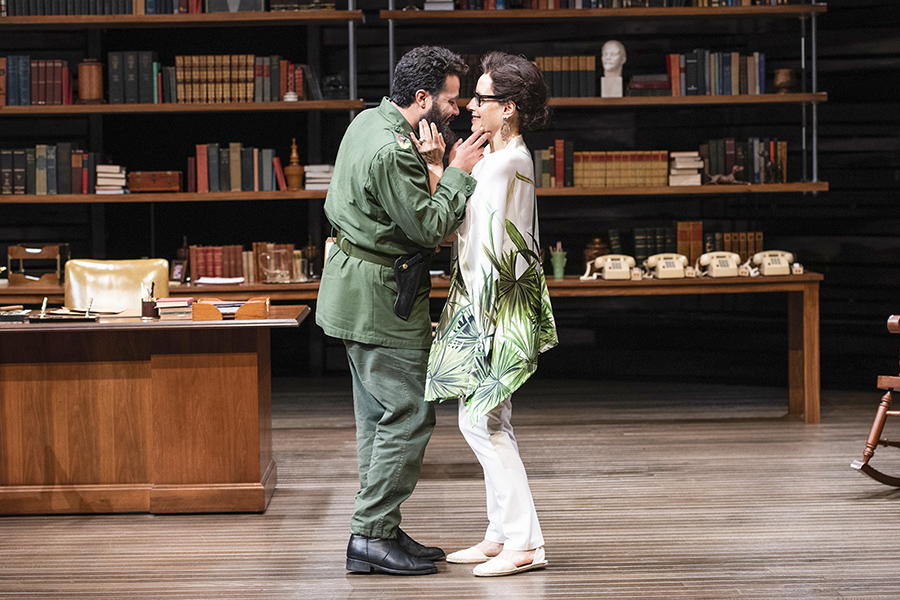 Photo of Andhy Mendez and Mirian Licha by Margot Schulman.

Listen to music from Celia and Fidel.

Arena's Celia and Fidel could not be more timely: Heather Velazquez

Tickets now on sale for live simulcasts of Celia and Fidel

Eduardo Machado on bringing Celia and Fidel to Washington audiences

A powerful and meaningful Ceila and Fidel at Arena Stage

Liam Torres chats about the timeliness of Ceila and Fidel

BWW Review: Celia and Fidel is a must-see play

A conversation with Eduardo Machado about penning Celia and Fidel

Eduardo Machado talks about inspiration behind Celia and Fidel

Celia and Fidel: why the timing is perfect for a new play about Castro

World Premiere of Celia and Fidel Is Announced at Arena Stage

Robert M. Jimenez, Marian Licha and more will star in the world premiere of Celia and Fidel at Arena Stage