The lives of seven friends are irrevocably changed when their old friend and blues singer Floyd Barton reappears with a chance of a lifetime. Infused with deep and soaring blues rhythms, this “rich and exceptionally vivid” (Variety) play pits the determination for a better future against life's harsh realities, ultimately leading to heartbreaking and inescapable circumstances. Director Tazewell Thompson returns to Arena Stage to direct August Wilson’s Seven Guitars — the fifth play in Wilson’s American Century Cycle.

Prime Sponsorship for Seven Guitars is generously provided by

DANE FIGUEROA EDIDI (Ruby) is excited to be returning to Arena Stage. The last time she was here, she choreographed Nina Simone: Four Women which garnered her a Helen Hayes Award nomination. In 2020 she won a Helen Hayes Award for her play Klytmnestra: An Epic Slam Poem, which had its world premiere at Theater Alliance, and in February 2022 her play Ghost/Writer will receive a world premiere at Rep Stage. Considered a prolific artist, she has had 13 books published and has acted in and written for the web series Untitled Documentary Project. https://www.ladydanefe.com/.

RODERICK LAWRENCE (Floyd Barton) is an actor, filmmaker and Blacktivist who recently founded Black Man Films. He created, produced and starred in the multi-award-winning short film Silent Partner, which premiered in August at the Oscar-qualifying RSF Martha’s Vineyard African-American Film Festival and is currently on the festival circuit. A 2020 AUDELCO nominee, credits include Simba in Disney’s The Lion King National Tour, Ramses in the Broadway-bound The Prince of Egypt, Othello in John Leguizamo’s Othello: The Remix andGuy in ONCE: The Musical. Comedy Central’s Broad City. BM, Baldwin Wallace Conservatory of Music. Love to Ma, Pope, Evan, Shelby, Auntie Cindy, Auntie Buffy, Granny, Cousin Gang & Ken. To God for all that I am. BLM. RIP KJB Socials:@rodericklaw. www.silentpartner-film.com

EDEN MARRYSHOW (Red Carter) is an award-winning director/writer/actor from Flatbush, Brooklyn. He is dedicating this performance to his big brother, Shawn Xavier Brown, aka Sha D.O.G., aka The World Ambassador of Dreams, who we lost too soon on July 8th. Eden recalls so many nights hanging on the stoop talking with Shawn about their BIG dreams. Shawn never told Eden once they weren’t possible. Not once. If anything, he told Eden he wasn't dreaming big enough. He encouraged everyone he came in contact with to dream big. So, big bro, check another one off the list up there for me. We are at Arena Stage. I promise I will always DREAM BIG and GO HARD! I love you and your life mattered. Peanut, I miss you and love you. Mom and Dad thank you for always believing in me. Cesa, I love you baby. LET’S GET IT!

DAVID EMERSON TONEY (Hedley) is happy to return to where he began his professional career. This production is his 30th and spans six decades. Other regional credits include Lucio in Measure for Measure at the Folger; Army in The Persians and Othello at the Shakespeare Theatre Company in Washington, D.C.; Jacques in As You Like It at the Utah Shakespearean Festival; Splash Hatch On The “E” Going Down at Yale Repertory Theatre; and The Fool in King Lear and West in Two Trains Running at the Kansas City Repertory Theatre. Broadway credits include Julie Taymor’s production of Juan Darién and A Free Man of Color directed by George C. Wolfe. David is also an assistant professor in performance and playwriting at VCUarts at Virginia Commonwealth University in Richmond, Virginia.

ROZ WHITE (Louise) is an actress, vocalist and teaching artist. Roz recently appeared as Odessa in The Shakespeare Theatre Company’s The Amen Corner. She played multiple roles in Mosaic Theater Company's Fabulation or The Re-Education of Undine and the title role of Pearl in Alliance for New Music Theatre's Black Pearl Sings! Roz starred as Sister Rosetta Tharpe in Marie and Rosetta (Mosaic Theater Company of D.C.). She is a graduate of The Duke Ellington School of the Arts and Howard University. Roz studied with the late Mike Malone, Dorothy Dash and the legendary Vera Katz. Theater credits include Dreamgirls (National Tour); Bessie's Blues (Helen Hayes Award); Once on This Island; Crowns; Gee's Bend (Helen Hayes Award Nomination); Pearl Bailey by Request; Anne and Emmett; and The Gin Game (MetroStage). She is a proud member of The Actor’s Equity Association for nearly 20 years. Roz is the proud mom of two brilliant sons, Anthony and King, and “Big Mama” to a beautiful grandson, Messiah.

AUGUST WILSON (Playwright)’s plays include Gem of the Ocean, Joe Turner’s Come and Gone, Ma Rainey’s Black Bottom, The Piano Lesson (Pulitzer Prize winner), Seven Guitars, Fences (Pulitzer Prize winner, Tony Award winner), Two Trains Running, Jitney (Oliver Award winner), King Hedley II and Radio Golf. In 2003, he made his stage debut in his one-man show, How I Learned What I Learned. He received an Emmy Award nomination for his screenplay The Piano Lesson. Other works include The Janitor, Recycle, The Coldest Day of the Year, Malcolm X, The Homecoming and the musical satire Black Bart and the Sacred Hills. Other awards include eight New York Drama Critics Circle Awards, Rockefeller and Guggenheim Fellowships in Playwriting, a Whiting Writers Award, 2003 Heinz Award, 1999 National Humanities Medal and induction into the Theater Hall of Fame.

TAZEWELL THOMPSON (Director) is an internationally acclaimed theater and opera director, award-winning playwright, librettist, teacher and actor. He has more than 150 directing credits, many world and American premieres, in major opera houses and theaters: France, Spain, Italy, Germany, Africa, Japan, Canada and the USA. His opera Blue, with composer Jeanine Tesori, won the 2020 MCANA Award for Best New Opera in North America. The New York Times and The Washington Post cited Blue as Best in Classical Music 2019. At Arena Stage he served as associate artistic director under Zelda Fichandler and has directed and/or written more than 20 productions at Arena Stage, the most recent, his a cappella musical, Jubilee. His award-winning play, Constant Star, has had 16 productions in major theaters across the country, winning nine Barrymore Awards, six Audelco Awards, five NAACP Awards and three Carbonell Awards. His play Mary T. & Lizzy K., commissioned by and produced at Arena Stage, is the recipient of The Edgerton Foundation New American Play Award. His production of Porgy and Bess, broadcast live from Lincoln Center, received Emmy Award nominations for Best Director and Best Classical Production. He holds the record of directing three productions — Appomattox/ Philip Glass, Lost in the Stars/ Kurt Weill and Cato in Utica/ Vivaldi — all in the same season in three different theaters at The Kennedy Center. Blue has upcoming productions in Toledo; Seattle; Pittsburgh; London; Amsterdam; Chicago; Washington, D.C.; and New York City.

DONALD EASTMAN (Set Designer) is thrilled to return to Arena Stage with Seven Guitars with his constant collaborator, Tazewell Thompson. For Arena he designed the premieres of Thompson’s Constant Star, Mary T. & Lizzie K. and Jubilee, as well as M Butterfly, Ma Rainey’s Black Bottom, Black No More, Yellowman, and The Heidi Chronicles at Arena Stage as well as Molly Smith’s productions of The Book Club Play and My Fair Lady. Recent productions include Intimate Apparel and Dinner With Friends for Baltimore’s Everyman Theatre, Possessing Harriet at Syracuse Stage, Chasing the New White Whale at La MaMa ETC and Blue a new American opera by composer Jeanine Tesori with libretto and direction by Tazewell Thompson. Donald has received numerous awards including a Village Voice OBIE for Sustained Excellence of Design and is a NEA/National Opera Institute grantee.

ROBERT WIERZEL (Lighting Designer) has designed the lighting for Arena’s productions of Sovereignty, The Pajama Game, A Raisin In The Sun, Mary T. & Lizzy K., The Heidi Chronicles, On The Verge, M Butterﬂy, Yellowman, Ma Rainey’s Black Bottom and Black No More. Broadway productions include Lady Day at Emerson’s Bar & Grill, the musical FELA! (Tony Award nomination) and David Copperﬁeld’s Broadway debut Dreams and Nightmares.  Robert has designed productions with opera companies throughout the country and abroad, as well as numerous productions (32 seasons) with Glimmerglass Festival. Robert’s dance work includes 36 years with the Bill T. Jones/Arnie Zane Company. Furthermore, Robert has worked at most regional theaters across the country, including the Shakespeare Theatre Company. Currently, Robert is a creative partner at Spark Design Collaborative and is on the faculty of NYU Tisch School of the Arts.

RON PIRETTI (Fight Director) directed the fights for Arena Stage’s production of Jubilee. On Broadway: The Last Ship, West Side Story, In the Heights, The Miracle Worker, Bengal Tiger at the Bagdad Zoo (add’l Fight Direction) and The Performers. Off-Broadway, his work has been seen at Cherry Lane Theatre among many others. Ron has worked at Goodspeed Opera, Dallas Theatre Center and Hartford Theatreworks. Ron appeared as Officer Krupke in the Broadway production of West Side Story and regionally, as one of the Clowns in 39 Steps. Ron has acted in film and TV. He has taught at the Actors Studio Drama School, Wagner College and Marymount Manhattan College. He currently teaches acting at The Barrow Group (NYC). He attended Trinity University (San Antonio) and received his MFA from the Goodman School of Drama.

VICTOR VAZQUEZ, CSA (Casting) is a casting director in New York City. He is the founder of XCasting (xcastingnyc.com) and sits on the national board of the Casting Society of America.

MARNE ANDERSON (Stage Manager) is thrilled to return to Arena Stage. Some highlights include The Heiress, Indecent, Dave, Two Trains Running, The Great Society, Nina Simone: Four Women, A Raisin in the Sun, Moby Dick, All the Way, Erma Bombeck: At Wit’s End, King Hedley II, Five Guys Named Moe, Mother Courage and Her Children, The Mountaintop, Metamorphoses, Long Day’s Journey into Night, Arabian Nights and Duke Ellington’s Sophisticated Ladies. She is a graduate of the University of North Carolina School of the Arts and a proud member of Actors’ Equity Association. 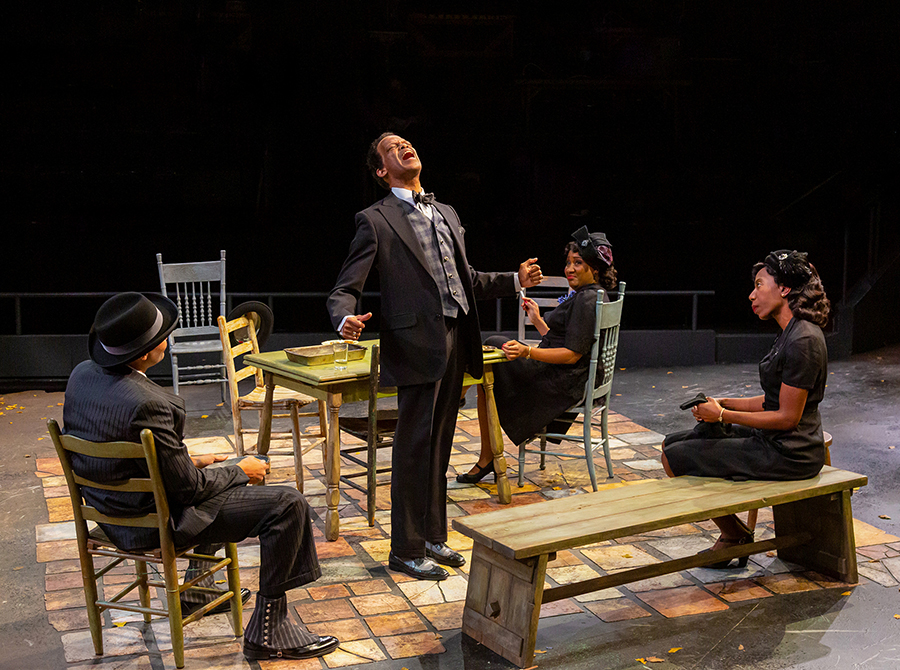 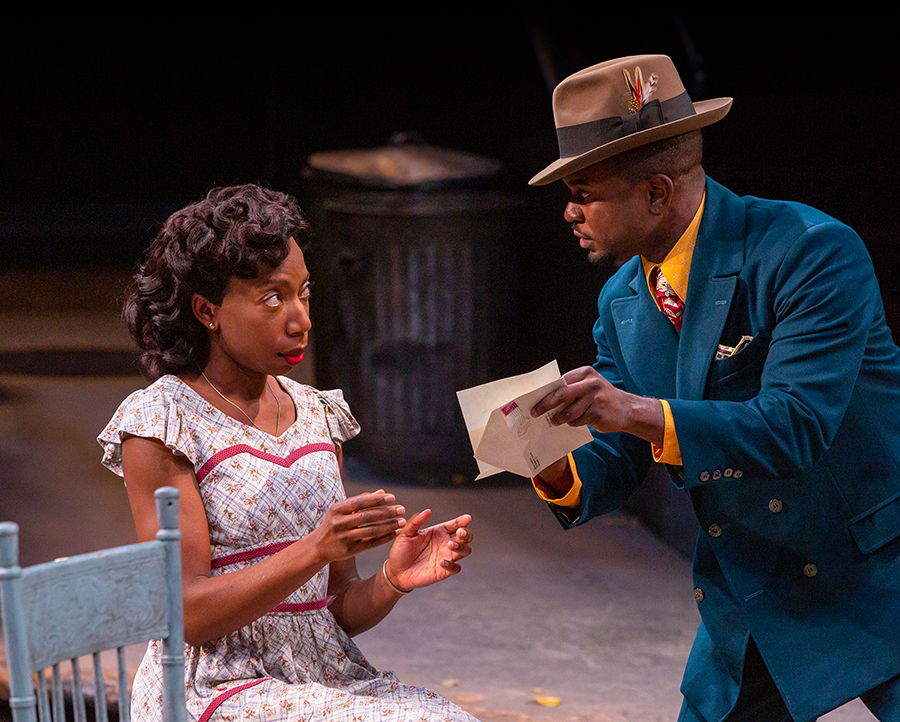 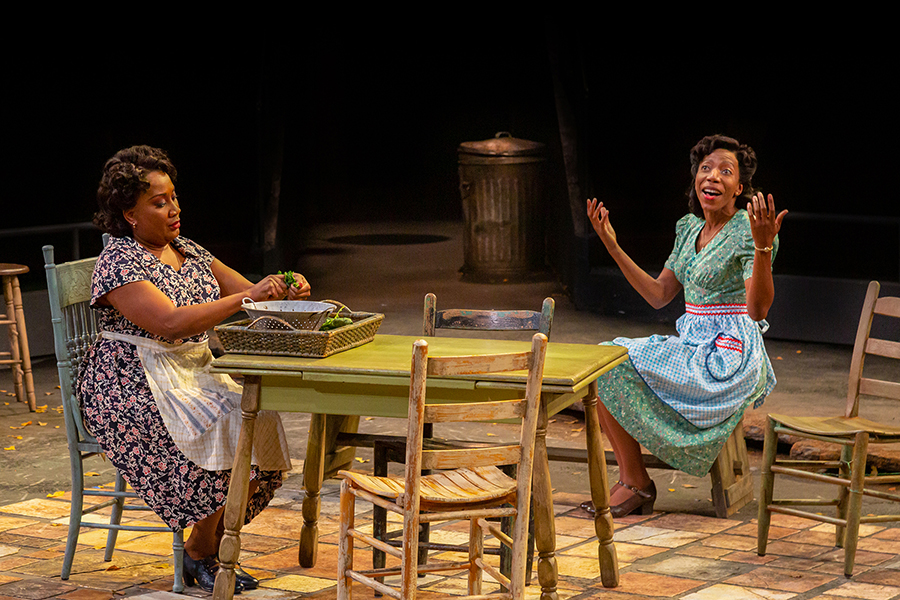 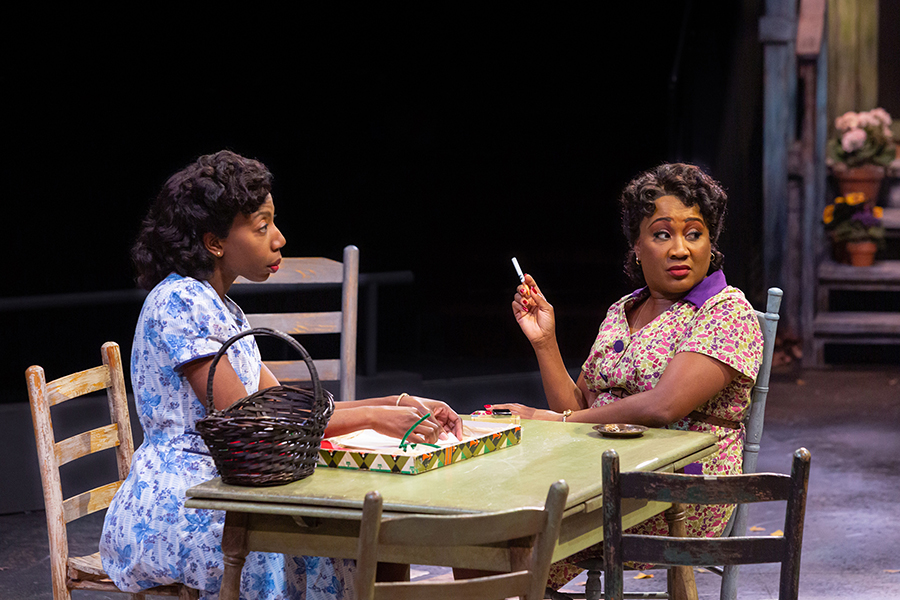 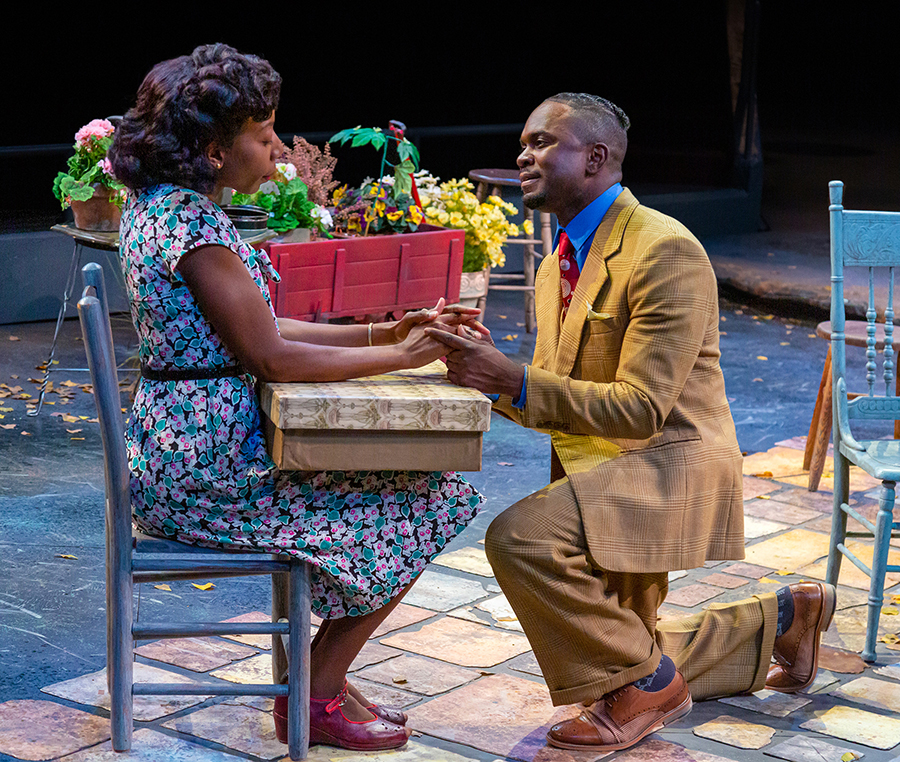 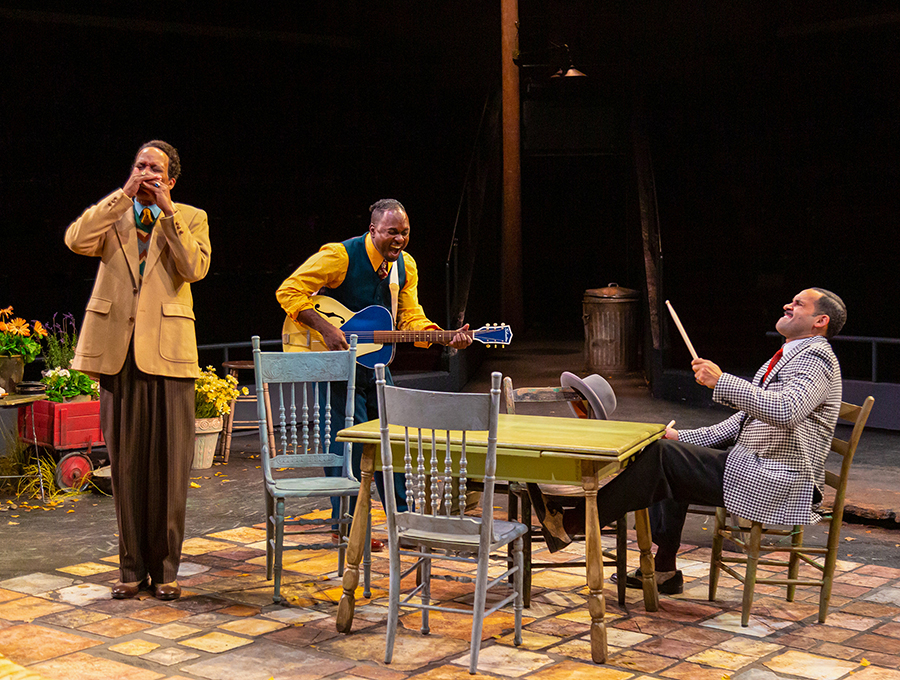 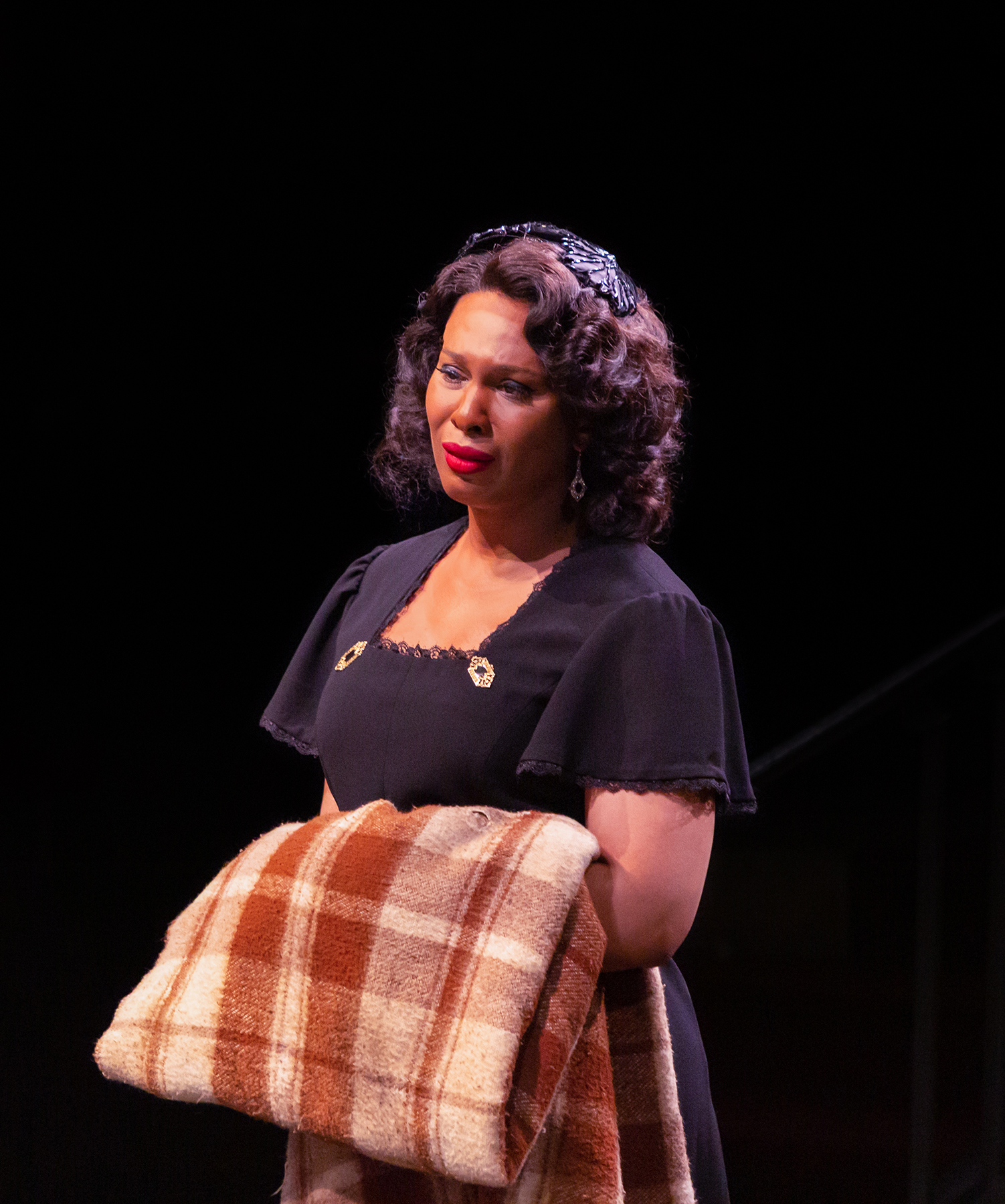 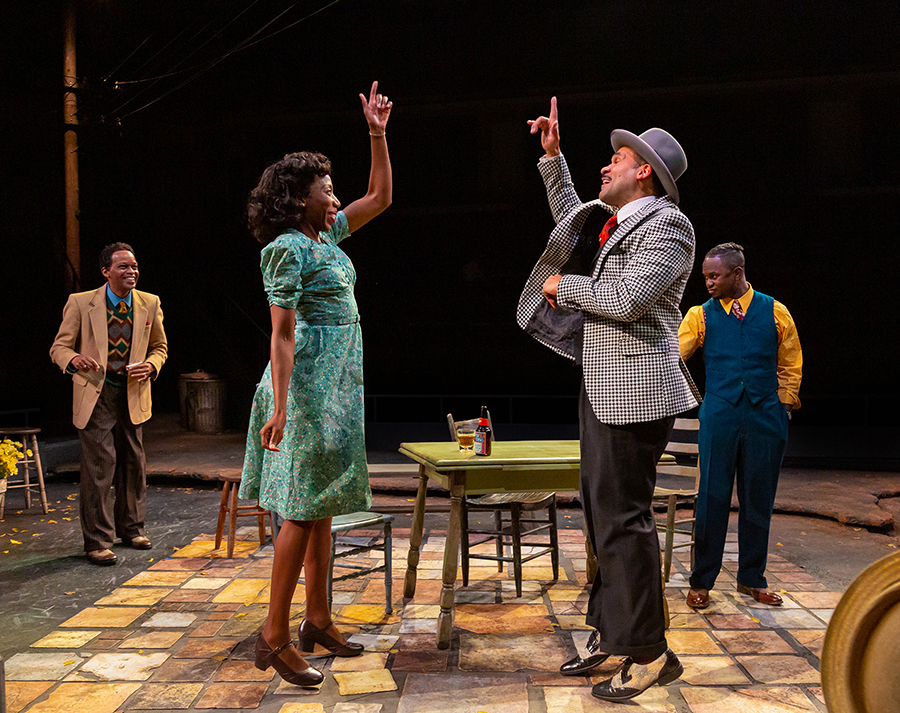 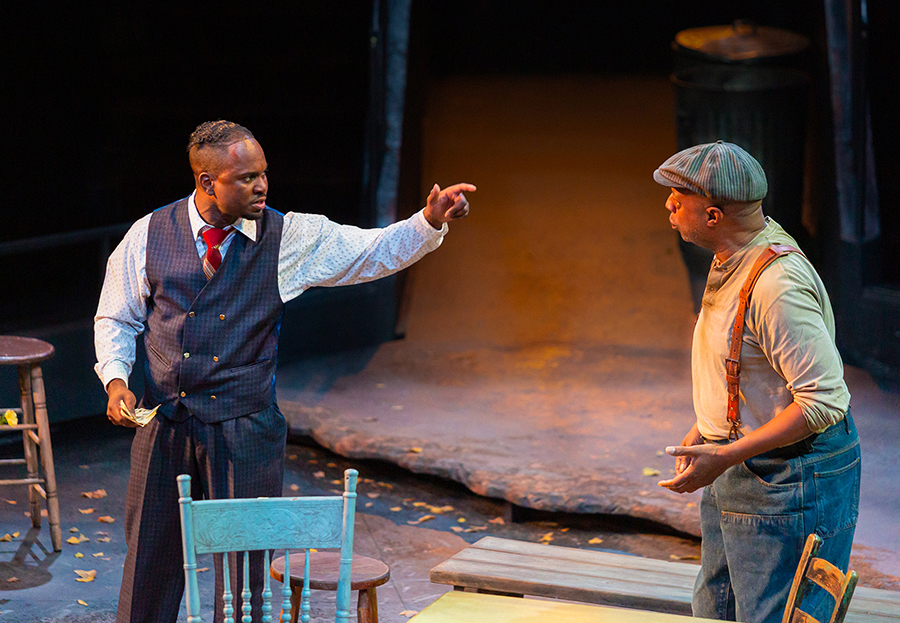 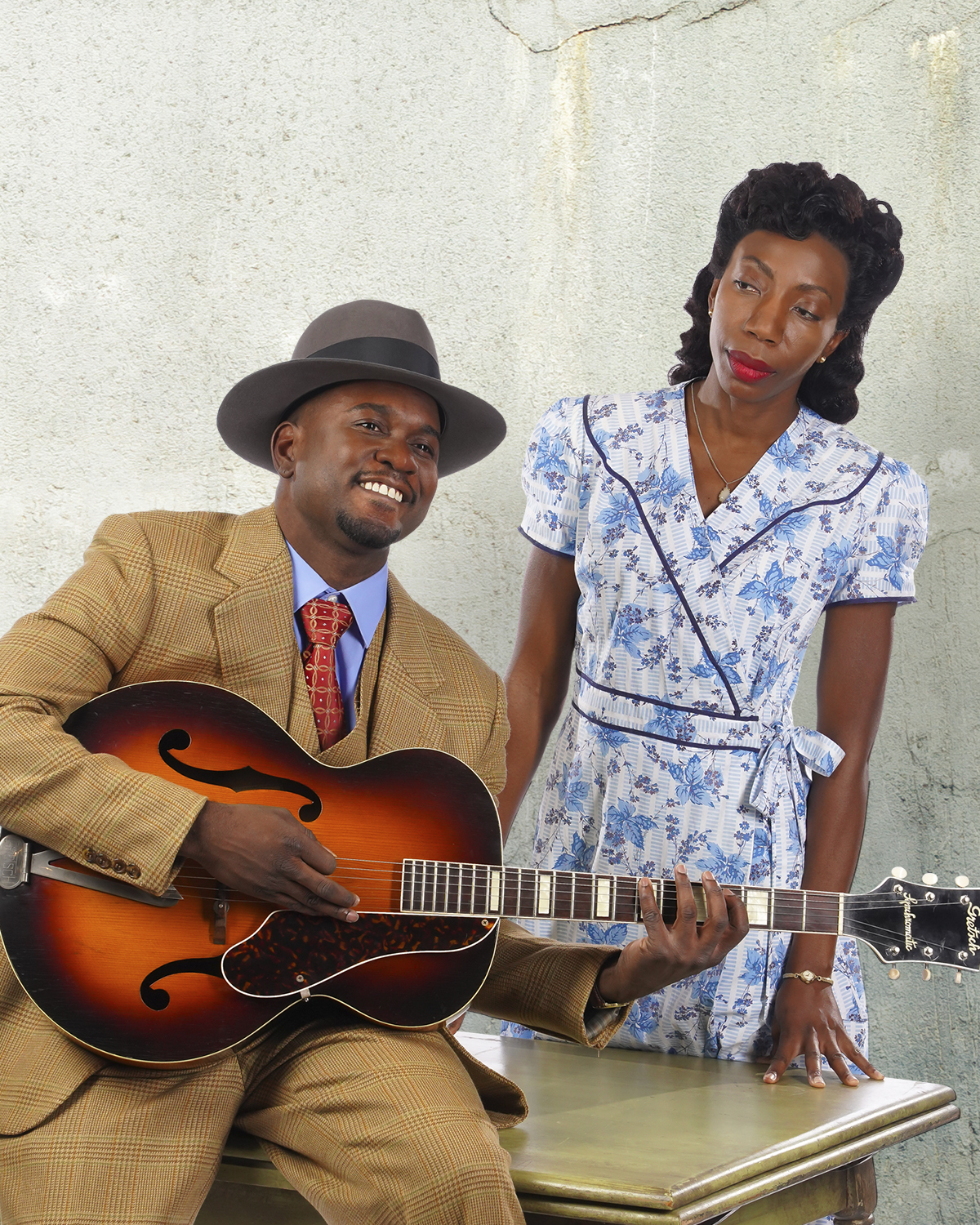 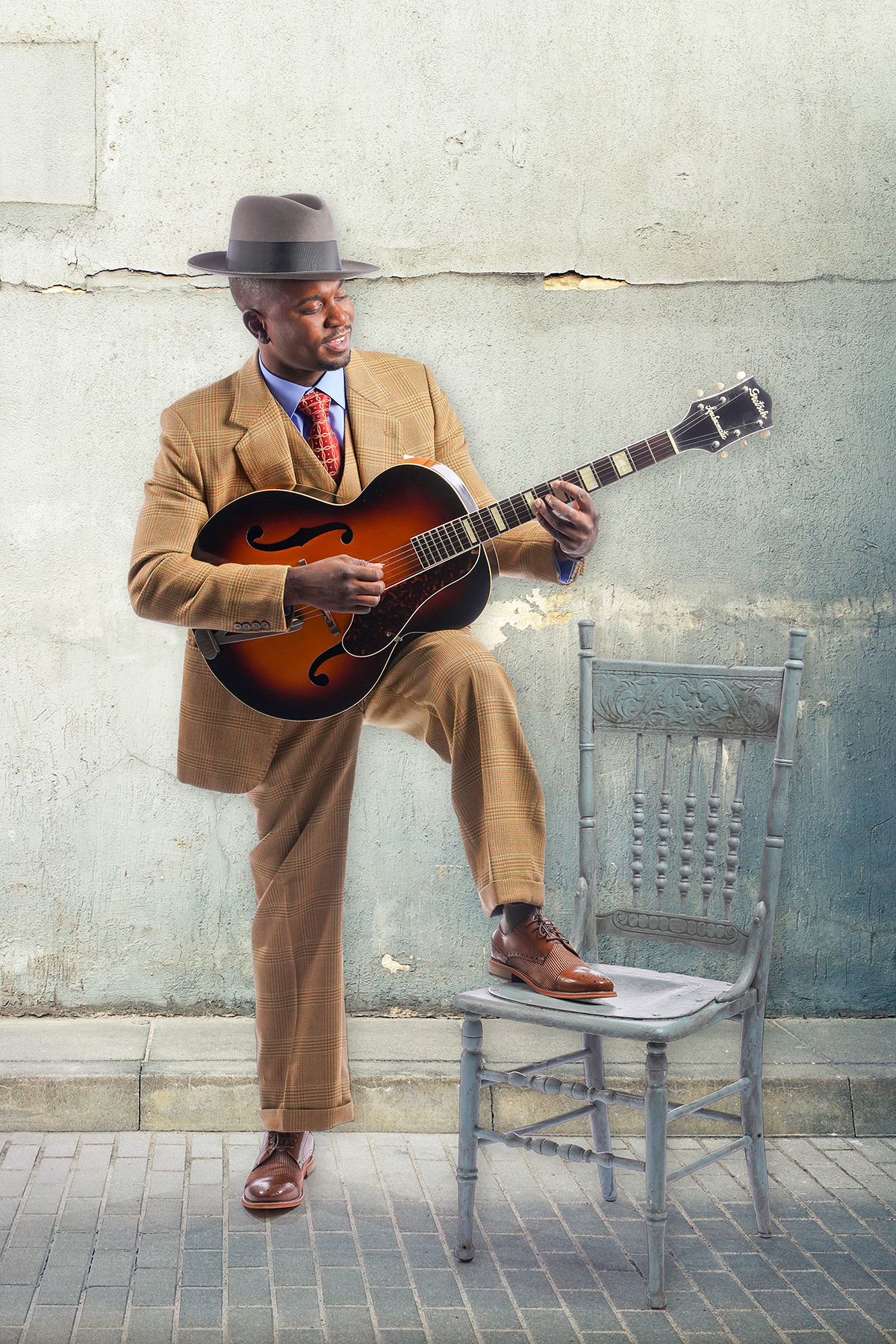 Listen to the Interview External link.

Listen to the Interview External link.

"A superb cast under the immensely talented direction of Tazewell Thompson."

"Director Tazewell Thompson has brought together seven actors fluent in characterization and nuance for a transcendent production of Seven Guitars at Washington's Arena Stage."

"My biggest holiday wish is for everyone, who is able, to have the opportunity to see Arena Stage’s Seven Guitars."

A conversation with the ladies of August Wilson's Seven Guitars

'I have to live in hope': Tazewell Thompson gets personal