The 'Originalist' at Arena Stage 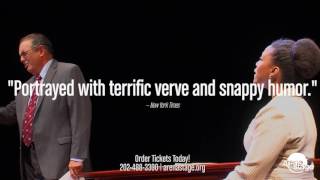 Four-time Helen Hayes Award winner Edward Gero returns as Supreme Court Justice Antonin Scalia, offering audiences another opportunity to see his “lively performance” (The Washington Post) in this special limited engagement. When a bright, liberal, Harvard Law School graduate embarks on a nerve-wracking clerkship with the conservative Justice, she discovers him to be both an infuriating sparring partner and an unexpected mentor. How will their relationship affect one of the most incendiary cases ever to reach the nation’s highest court? Don’t miss your opportunity to experience the show afresh with a brand-new staging for the Kreeger Theater.

makes her Arena Stage debut. She is ecstatic to return to the role following productions at Pasadena Playhouse and Asolo Repertory. Jade has performed extensively along the east coast from Massachusetts to Florida. Most recently she appeared in The Legend of Georgia McBride at GableStage. Her onewoman show Who is Eartha Mae? played Off-Broadway at the 2016 United Solo Fest and won for Best Cabaret. Local credits include Debbie Allen’s Alex in Wonderland and Lost in the Stars(the Kennedy Center); An Octoroon (Woolly Mammoth); The Two Gentlemen of Verona(Shakespeare Theatre Company); and Ruined (Everyman Theatre). Regional credits include GableStage, Central Square Theatre and Stoneham Theatre. She received her B.A. in theater and French from George Mason University and additional training from La Ferme de Trielle and The Actors Space. jadewheeleractor.wixsite.com/home

is honored to be making his debut at Arena Stage. Past regional theater credits include The Great Society (Asolo Repertory); Mezzulah 1946 and The Muckle Man (Pittsburgh City Theatre); Leveling Up and The Tempest (The Hippodrome Theatre); Twelfth Night and Julius Caesar (Orlando Shakespeare Theatre); and The Illusion (Chautauqua Theatre). Brett is a recent M.F.A. graduate from Florida State University. He can be seen in season two of Scandal on ABC. Brett is grateful to be a part of the team behind The Originalist and would also like to thank his family for their constant support.

John's Arena Stage commissions include Snow Child, The Originalist, The Miser, Lovers and Executioners (MacArthur Award) and Tom Walker. Recent works include the book and lyrics for Hat! A Vaudeville (South Coast Repertory); Lincolnesque (Old Globe); and Lorenzaccio (Shakespeare Theatre Company), and the book for the musical The Highest Yellow (Signature Theatre). Additional plays are The Diaries (Signature Theatre, MacArthur nomination); Otabenga (Signature Theatre, MacArthur nomination); Three Nights in Tehran (Signature Theatre); and The Cockburn Rituals (Woolly Mammoth). Strand spent 10 years in Paris, where he worked as a journalist and drama critic, and directed NYU’s Experimental Theater Wing in Paris. His novel Commieland was published by Kiwai Media, Paris in 2013. He is currently at work on a new play about President Teddy Roosevelt for Arena Stage and on the film adaptation of The Originalist.

has served as Artistic Director since 1998. Her more than 30 directing credits at Arena Stage include Carousel, Oliver!, The Originalist, Fiddler on the Roof, Camp David, Mother Courage and Her Children, Oklahoma!, A Moon for the Misbegotten, My Fair Lady, The Great White Hope, The Music Man, Orpheus Descending, Legacy of Light, The Women of Brewster Place, Cabaret, South Pacific, Agamemnon and His Daughters, All My Sonsand How I Learned to Drive. She most recently directed Our Town at Canada’s Shaw Festival. Her directorial work has also been seen at The Old Globe, Asolo Repertory, Berkeley Repertory, Trinity Repertory, Toronto’s Tarragon Theatre, Montreal’s Centaur Theatre and Perseverance Theater in Juneau, Alaska, which she founded and ran from 1979-1998. Molly has been a leader in new play development for over 30 years. She is a great believer in first, second and third productions of new work and has championed projects including How I Learned to Drive; Passion Play, a cycle; Next to Normal; and Dear Evan Hansen. She has worked alongside playwrights Sarah Ruhl, Paula Vogel, Wendy Wasserstein, Lawrence Wright, Karen Zacarías, John Murrell, Eric Coble, Charles Randolph-Wright and many others. She led the re-invention of Arena Stage, focusing on the architecture and creation of the Mead Center for American Theater and positioning Arena Stage as a national center for American artists. During her time with the company, Arena Stage has workshopped more than 100 productions, produced 39 world premieres, staged numerous second and third productions and been an important part of nurturing nine projects that went on to have a life on Broadway. In 2014, Molly made her Broadway debut directing The Velocity of Autumn, following its critically acclaimed run at Arena Stage. She was awarded honorary doctorates from American University and Towson University.

has worked at Asolo Repertory, Baltimore Center Stage, Cincinnati Playhouse in the Park, the Kennedy Center, Milwaukee Shakespeare, Opera Lafayette, Opera Royal Versailles, Pasadena Playhouse, Portland Center Stage, Round House, Shanghai Dramatic Arts Center, Signature Theatre, Skylight Music Theatre, Studio Theatre, Syracuse Stage, Theater J, Wilma Theater and Woolly Mammoth, among many other companies in the United States and abroad. He is a company member at Woolly Mammoth and an associate artist at Olney Theatre Center. Misha is a Helen Hayes Award recipient, a graduate of the St. Petersburg Theatre Arts Academy and serves as the associate professor of scene and costume design and head of M.F.A. in design at University of Maryland.

is the costume director at Arena Stage, where he has worked for 17 seasons in various capacities on over 100 productions. He most recently designed costumes for Molly Smith’s Mother Courage and Her Children and the world premiere of The Originalist. He held internships with Williamstown Theatre Festival and Actors Theatre of Louisville. Joe studied at the University of Dayton. For Karen and Marjan.

is pleased to return to Arena Stage, where his credits include Oliver!, Fiddler on the Roof and the premiere of The Originalist. He is a company member at Woolly Mammoth where he has designed over 45 productions, including An Octoroon, HIR and Black Side of the Moon. As a conspirator with the devising company dog & pony dc, he has collaborated in the writing, direction and design of A Killing Game, Beertown and Toast. His recent work includes Macbeth at Shakespeare Theatre Company, Midwestern Gothic at Signature Theatre and Transmission with The Welders. Colin is the receipient of three Helen Hayes Awards and a Princess Grace Fellowship in Theater. He is a graduate of Dartmouth College.

returns to Arena Stage after having composed music for Orpheus Descendingand Anna Christie, and creating the sound design for the original production of The Originalist. Other recent projects include Grounded (Everyman Theatre, Olney Theatre Center and Northern Stage); The Nether (Woolly Mammoth); and The Flick (Signature Theatre), for which he received a Helen Hayes Award nomination. www.shimelonis.com

is thrilled to make her Arena Stage debut with The Originalist. Allie’s other D.C.-area credits include Diner, West Side Story, Mrs. Miller Does Her Thing and Elmer Gantry (Signature Theatre); Straight White Men, Animal, Silence! the Musical and Murder Ballad (Studio Theatre); and Ulysses on Bottles, When January Feels Like Summer and After the War (Mosaic Theater Company). Before moving to D.C., Allie worked in Los Angeles for 10 years, where she was the resident stage manager for Cabrillo Music Theatre. With Cabrillo, Allie stage managed over 20 productions including The Producers, 42nd Street, Legally Blonde, CATS and 1776. Allie is a graduate of UCLA’s School of Theater, Film and Television, and is a proud member of Actors’ Equity.

is currently Theatre Adviser to the Arts Council of Ireland and Dramaturg at American Voices New Play Institute at Arena Stage in Washington, D.C. He has taught dramaturgy at the John F. Kennedy Center for the Performing Arts, Columbia University and Trinity College Dublin. He was the Commissioning and Literary Manager of the Abbey Theatre for four years, and lead theater critic with The Sunday Tribune for nine years. He is an associate artist with The Civilians and Theatre Mitu in New York. He has written six plays for Anne Bogart and the SITI Company — Bob, Alice’s Adventures Underground, Room, Score, Antigone and Trojan Women (After Euripides) — and Chess Game No. 5, his new collaboration with the company, will premiere in New York in March.

Now in its 59th season, Asolo Repertory Theatre is recognized as one of the premier professional theaters in America and one of the largest in the Southeastern United States. As a center for theatrical excellence, Asolo Rep crafts the highest quality productions of classical, contemporary and newly commissioned work all performed in the rarest form of rotating repertory. Asolo Rep’s highly-skilled acting company and extensive craftsmanship bring to life this unique performance method that offers audiences a unique and dynamic theatre experience. Under the leadership of Producing Artistic Director Michael Donald Edwards and Managing Director Linda DiGabriele, this world-class institution has taken a bold step toward the future, building landmark partnerships and collaborations which will add to its success for generations to come.

Celebrating its centennial this year, Pasadena Playhouse is one of the most prolific theater companies in America. Its legacy includes world premieres by beloved American playwrights Eugene O’Neil and Tennessee Williams and productions that have transferred to Broadway like Sister Act: The Musical. In 1937, the Playhouse was officially recognized as the State Theater of California for its contribution and commitment to the dramatic arts. Today it continues that tradition of excellence under the helm of Producing Artistic Director Danny Feldman. Dedicated to enriching lives through theater, community programs and learning, Pasadena Playhouse is a living force in the community. 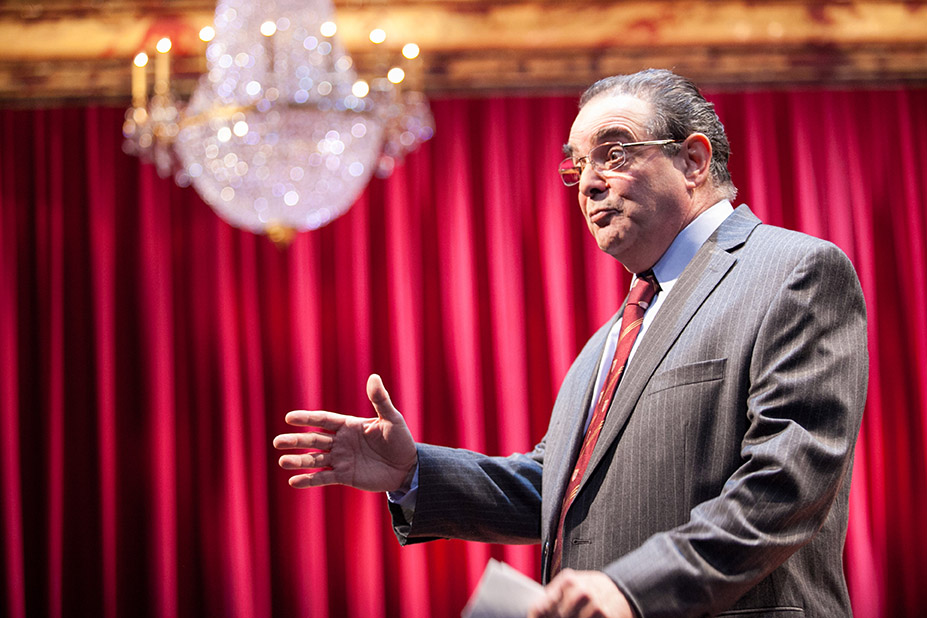 Edward Gero as Supreme Court Justice Antonin Scalia in The Originalist, which runs July 7-July 30, 2017 at Arena Stage at the Mead Center for American Theater. Photo by C. Stanley Photography. 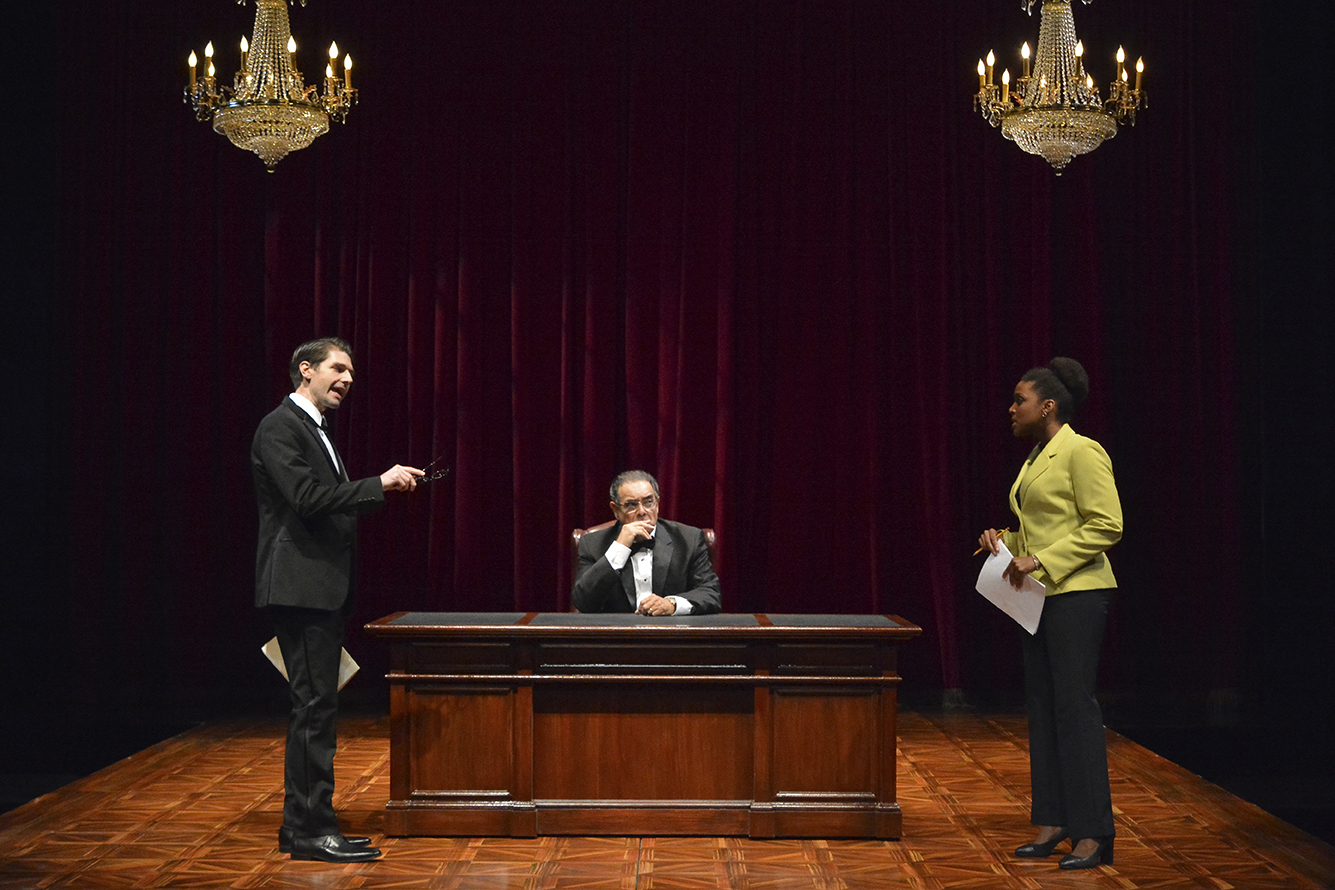 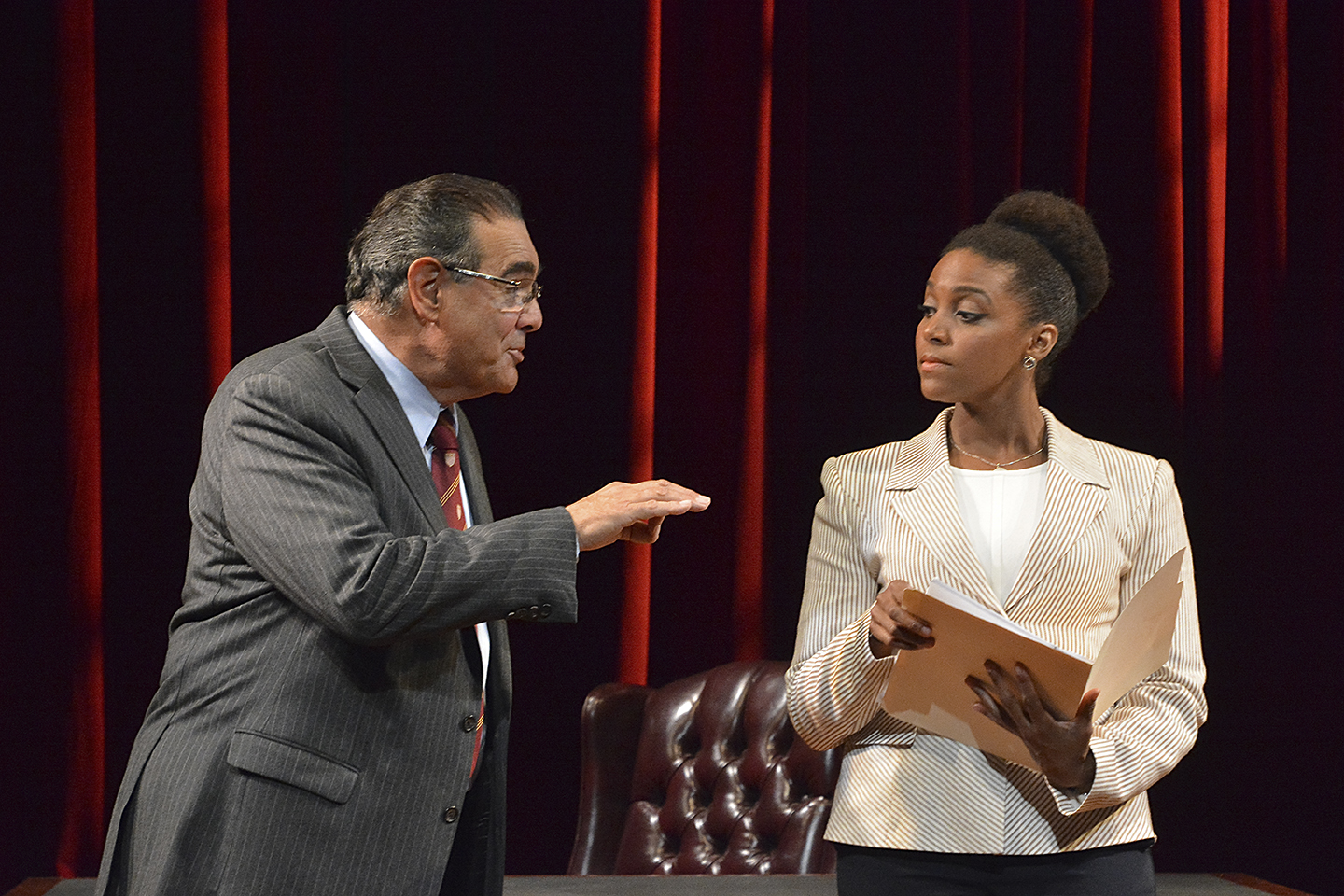 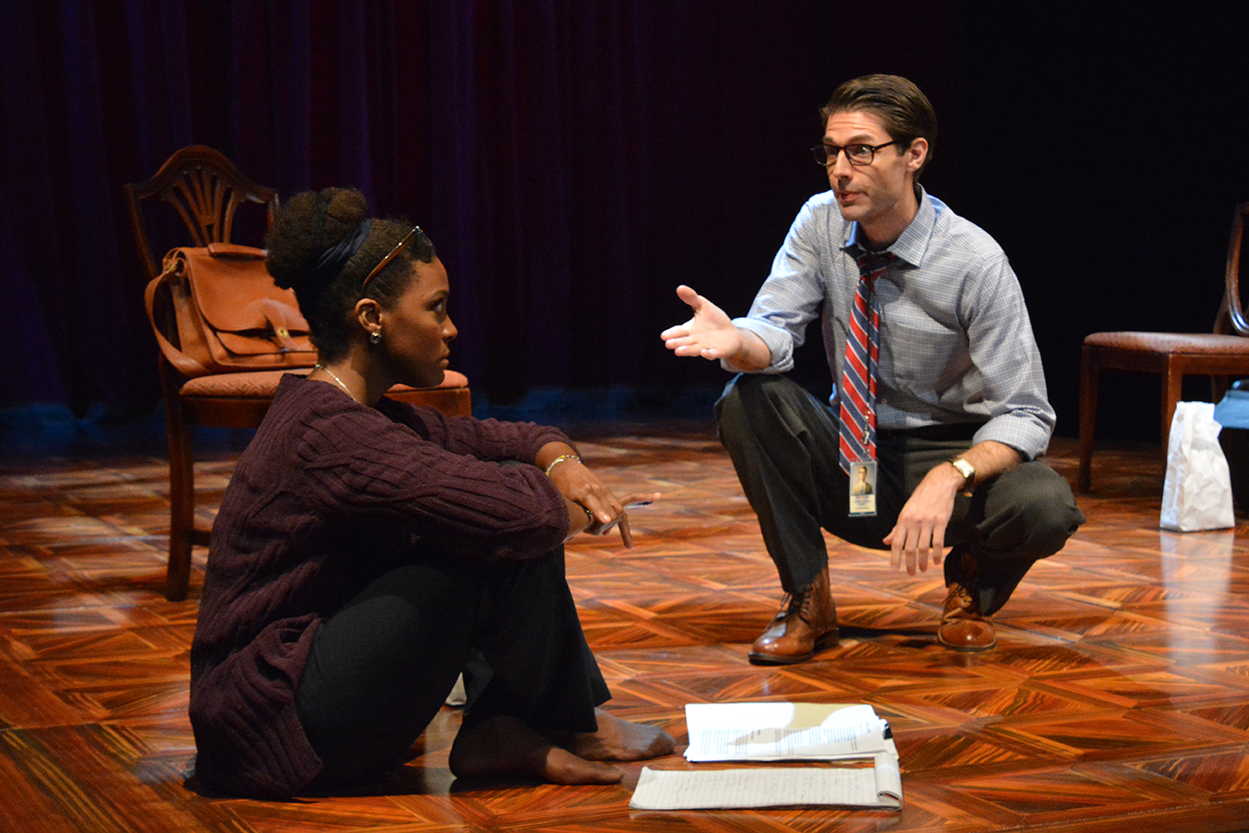 (L to R) Jade Wheeler as Cat and Brett Mack as Brad in The Originalist, which runs July 7-July 30, 2017 at Arena Stage at the Mead Center for American Theater. Photo by Gary W. Sweetman, Asolo Repertory Theatre. 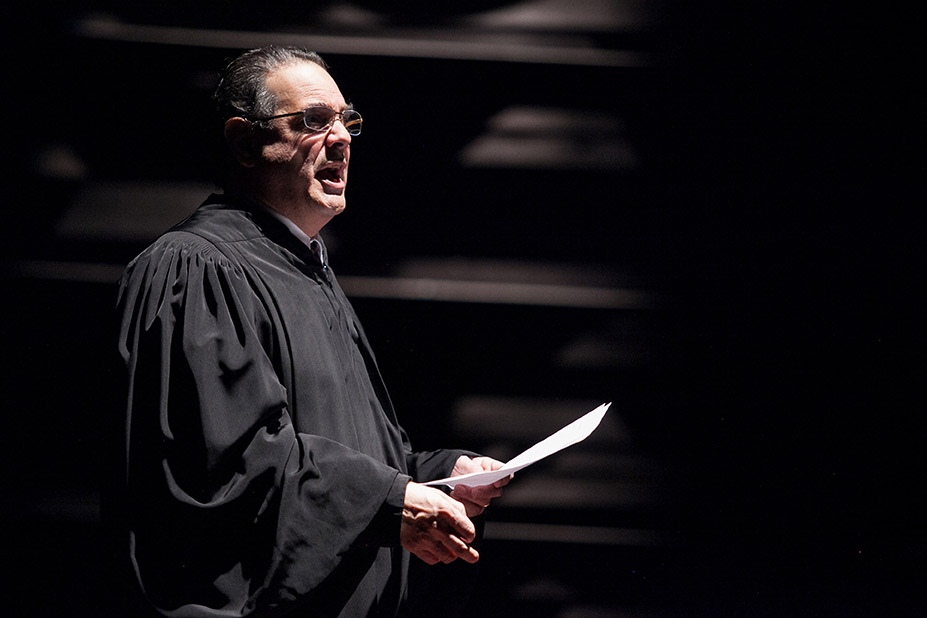 Edward Gero as Supreme Court Justice Antonin Scalia in The Originalist, which runs July 7-July 30, 2017 at Arena Stage at the Mead Center for American Theater. Photo by C. Stanley Photography.

Gero still rules as Scalia in The Originalist