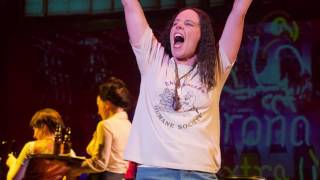 The lawyer: a young, brilliant, courageous woman arguing Roe v. Wade before the Supreme Court. The plaintiff: a complex, single woman seeking to end an unwanted pregnancy. The landmark 1973 case legalized abortion, but also began their separate journeys that would come to mirror the polarization in American culture. With shocking turns and surprising humor, Roe illuminates the difficult choices women make and the passion each side has for its cause.

Roe is generously sponsored by Susan and Steven Bralove.

makes her Arena Stage debut. Regional credits include Richard II and Dead Man’s Cell Phone (Oregon Shakespeare Festival); Hamlet (New Victory Theater); Twelfth Night (Shakespeare Theatre Company); The Servant of Two Masters (Yale Repertory); Sarah Ruhl’s Three Sisters and Behind The Eye (Cincinnati Playhouse); The Syringa Tree (Jungle Theater); and Time Stands Still, The 39 Steps, Dollhouse, Major Barbara, Home Place, The Secret Fall of Constance Wilde and As You Like It (The Guthrie). Sarah was a company member of Theatre de la Jeune Leune from 1997 – 2006, appearing in over 15 productions including The Hunchback of Notre Dame, Tartuffe, The Seagull and The Miser. Film/TV credits include Lady Dynamite, Detective Fiction and Older Than America. Sarah is a 2012 McKnight Theater Fellow and received the Cincinnati Acclaim Award and Princess Grace Honorarium.

makes her Arena Stage debut. Regional credits include Beneath in A Raisin in the Sun (Ebony Repertory Theatre and Kirk Douglas Theatre), Pecola in The Bluest Eye (Cape Fear Regional Theatre) and Hester/La Negrita in In the Blood (Carnegie Mellon). Her international credits include Irina in The Seagull (Moscow Art Theatre). Hailing from Houston, Texas, Kenya received her B.F.A. in acting at Carnegie Mellon University School of Drama. During her senior year she accepted an elite invitation to attend a semester abroad at Europe’s  premier theater school, MXAT (Moscow Art Theatre School). Many thanks to God and her family for their undying love and support!

is pleased to make his Arena Stage debut. He appeared Off-Broadway in A Midsummer Night’s Dream (Pearl Theatre) and Fashions for Men (Mint Theater). Before that, he was a company member for several years at Oregon Shakespeare Festival, where some of his favorite plays were The Servant of Two Masters, Paradise Lost, She Loves Me, Animal Crackers and The Cocoanuts, the last of which he adapted. Additional regional credits include Cymbeline (Shakespeare Theatre Company), Touchstone in As You Like It (Hudson Valley Shakespeare) and Hysterium in A Funny Thing Happened on the Way to the Forum (Geva Theatre). www.markbedard.com

makes her Arena Stage debut. She spent time performing at Everette KidStage as Splat’s Mom in Splat the Cat, Grandma Georgina in Willy Wonka Kids, Hiccup’s Girlfriend in How to Train Your Dragon and ensemble in Peter Pan. Zoe participated in weekly improve performances at LA Connections Comedy Club for several months. Her film/TV credits include My Son Wants to Be Gay, Geo Tag, the Healthy Eating video series on Amazon.com and various commercial work. Twitter:@ZoeCStart | Instagram:@ZoeCStart

makes her Arena Stage debut. Regional credits include Twelfth Night, Fingersmith, Antony and Cleopatra, A Wrinkle in Time and Black Swan Lab (Oregon Shakespeare Festival); Boeing Boeing (Delaware Theatre Company); The Fantasticks (Repertory Theatre of St. Louis); Sweeney Todd, Richard III, The Imaginary Invalid, Cabaret, The Taming of the Shrew, The Mousetrap, The Mystery of Edwin Drood, Twelfth Night, The Crucible, The Tempest, Hay Fever and A Midsummer Night’s Dream (Great Lakes Theater); Little Shop of Horrors, The Spitfire Grill, She Stoops to Conquer, As You Like It, The Importance of Being Earnest and Scapin (Idaho Shakespeare Festival); and Brilliant Traces, The Physics of Regret, Lobby Hero, The Cherry Orchard and The Cripple of Inishmaan (Boise Contemporary Theatre). TV credits include MDs.

made her ebut with Oregon Shakespeare Festival last season in Richard II and originated the role of Connie in Roe. She’s been an associate artist with California Shakespeare Theater for 15 seasons, last seen as Prospero in their community tour of The Tempest. As a company member with the San Francisco based theatre Campo Santo since 2001, she collaborates and performs in numerous premieres by critically acclaimed and award winning writers. Her regional  credits include Magic Theatre, Shotgun Players, American Conservatory Theatre, San Jose Repertory Theatre, Yale Repertory Theatre, La MaMa, The Lensic, The Ground Floor/Berkeley Repertory and JAW/Portland Center Stage. She works in restorative justice teaching theater arts to formerly incarcerated young women at Community Works West/ Rising Voices and at San Quentin State Prison.

previously appeared at Arena Stage in The Cherry Orchard and You Can’t Take It With You. She created the role of Agnes in A.R. Gurney’s Love and Money (Signature Theatre), Lana in The Early Girl (Circle Rep.) and Marjorie Baverstock in The Musical Comedy Murders of 1940 on Broadway. Pamela is guest-starring in the new Jill Soloway comedy I Love Dick, and will be featured in Suburbicon for the Coen Brothers and the upcoming film Wetlands opposite Adewale Akinnuoye-Agbaje. Pamela had recurring roles on Mad Men, Commander in Chief, Maron, Doll and Em, and was most recently was seen as Barb in Girls. She studied with Sanford Meisner, received an OOBR Award and is a member of Circle Repertory Acting Company.

returns to Arena Stage where she delighted in Noises Off, Proof, Well, Born Yesterday, Book of Days, Intimations for Saxophone and The Importance of Being Earnest. She is a proud new OSF company member who premiered in Roe, Richard II, Play On and Black Swan Lab. Regional credits include Hostage (Center Stage); Citizen13559 (Kennedy Center); Lisa Loomer’s Living Out (Round House); The 39 Steps and The Laramie Project (Olney, associate artist); Intimate Apparel (African Continuum); Ghost-Writer and The Girl in the Goldfish Bowl (MetroStage); The BFG (National Theatre); and The Cripple of Inishmaan (Studio Theatre). Recent Film/TV credits include Turn and The Wire. Susan is a Georgetown professor and recipient of multiple Helen Hayes Nominations and Awards, DCTS’s Audience Choice, and DCCAH’s Individual Artist Award. Favorite offstage role: Loving pet parent to her famous grey tabby, the inimitable Egg.

makes her Arena Stage debut. Regional credits include Great Expectations (Oregon Shakespeare Festival); The Miracle Worker, The Liar, Tribes, The Playboy of the Western World, Red Herring, Sherlock Holmes and the Case of The Christmas Carol, The Cherry Orchard, Ah, Wilderness!, Design for Living and All My Sons (Artists Repertory Theatre, resident artist since 2014); JAW: A Playwrights’ Festival and One Flew Over the Cuckoo’s Nest (Portland Center Stage); Middletown, Gidion’s Knot, Noises Off and Or (Third Rail Repertory Theatre); and God’s Ear, Freakshow and The Long Christmas Ride Home (Theatre Vertigo). Film/TV credits include Grimm. Amy is the recipient of Drammy Awards for Gidion’s Knot and God’s Ear and received her B.A. from Temple University.

returns to Arena Stage after directing Equivocation and A Community Carol. He directed the Tony Award-winning All the Way on Broadway and the world premiere of The Clean House at Yale Repertory, where he is an associate artist, and its Off-Broadway premiere (Lincoln Center). Other world premieres include Fingersmith, The Great Society, Equivocation and By the Waters of Babylon (Oregon Shakespeare Festival); Living Out and For Here or to Go? (Mark Taper Forum); and My Wandering Boy and The Further Adventures of Hedda Gabler (South Coast Repertory). He became the OSF’s artistic director in 2007, having been co-founder and artistic director of Cornerstone Theater (1986-2006). Honors include the Helen Hayes, TCG’s Visionary Leadership, Fichandler, L.A. Weekly and Garland Awards; Margo Jones Medal; and Emmy and Ovation Award nominations.

New York design credits include Night Is a Room, Our Lady of Kibeho and And I and Silence (Signature Theatre); An Iliad (New York Theatre Workshop, McCarter, Seattle Repertory); Grand Concourse, The Patron Saint of Sea Monsters, The Call and Go Back to Where You Are (Playwrights Horizons); Slowgirl (LCT3); Bright Half Life (Women’s Project); To the Bone (Cherry Lane Theatre); Harper Regan and Bluebird (Atlantic Theater Company); The Tutors (Second Stage); Orange and Hat & Grace (Soho Rep); This Wide Night (Naked Angels); BAM Next Wave Festival; and The Public. Regional design credits for Arena Stage, Oregon Shakespeare Festival, The Guthrie, Mark Taper Forum, Berkeley Repertory, Seattle Repertory, La Jolla Playhouse and many others. Rachel is also the recipient of the Princess Grace Award, NEA/TCG Fellow and Lilly Award.

is head of voice and text at the Oregon Shakespeare Festival where she has been the voice and text director for over 30 productions including the world premiers of The White Snake, All the Way, The Great Society and Equivocation. Other credits include Utah Shakespeare Festival, Guthrie Theater, American Repertory Theater, Royal National Theatre in London, and the Tony Award winning production of All the Way on Broadway. Teaching credits include the Central School of Speech and Drama, the Oxford School of Drama and the Royal Academy of Dramatic Art. She is co-author of three books including The Shakespeare Workbook and Video, published by Bloomsbury Methuen Drama.

Broadway credits include The Kentucky Cycle and All the Way by Robert Schenkkan. Regional credits include All the Way and The Great Society (Oregon Shakespeare Festival); The Great Society (Seattle Repertory); Lewis and Clark Reach the Euphrates (Mark Taper Forum); The Wind Cries Mary (San Jose Repertory); Discovery of America (Emory University); The Mandrake Root (Long Wharf Theatre); Apollo (Portland Center Stage); and How the World Began (South Coast Repertory, Pacific Playwrights Festival). Film credits include developmental work for HBO, BBC and Disney. He is a professor of theater at Crafton Hills College and received his M.F.A. in directing, Carnegie Mellon University.

is thrilled to be able to continue with Roe here at Arena Stage, which marks his first time working at a D.C. theater. Jeremy has been stage managing at various theaters across the country for 25 years, 19+ of them on a myriad of productions at Oregon Shakespeare Festival. Jeremy is very grateful to Bill Rauch, Lisa Loomer and Kimberley Jean Barry for this opportunity, and to Kay, Yoshiko and Mio for “holding down the fort.”

Arena Stage credits include Moby Dick, All the Way, Erma Bombeck: At Wit’s End, King Hedley II, Five Guys Named Moe, Mother Courage and Her Children, The Arabian Nights and Duke Ellington’s Sophisticated Ladies. Additional D.C. credits include A Midsummer Night’s Dream and Rosencrantz and Guildenstern Are Dead (Folger Theatre); Angels in America: Parts 1 and 2 (Round House); and You for Me for You and Mr. Burns, A Post-Electric Play (Woolly Mammoth). She is a graduate of the University of North Carolina School of the Arts and a proud member of Actors’ Equity Association. She is thankful to her family for all their love and support.

was founded by Angus Bowmer in 1935, and has grown from a three-day festival to one of the largest nonprofit theaters in the United States. OSF presents an eight-month season of 11 plays in rotating repertory, including works by Shakespeare as well as a mix of classics, musicals, and new works. Every year, OSF draws attendance of more than 400,000 to nearly 800 performances and employs approximately 575 theater professionals. OSF’s mission statement: “Inspired by Shakespeare’s work and the cultural richness of the United States, we reveal our collective humanity through illuminating interpretations of new and classic plays, deepened by the kaleidoscope of rotating repertory.” OSF is committed to diversity and inclusion in all areas of its work and in its audiences.

has grown from a storefront stage to a national leader in innovative theatre. Known for its core values of imagination and excellence, as well as its educated and adventurous audience, the nonprofit has provided a welcoming home for emerging and established artists since 1968. With two stages, a school, and a Tony Award for Outstanding Regional Theatre, Berkeley Rep is proud to premiere exhilarating new plays. Nine shows seen at Berkeley Rep have ended up on Broadway. More than 12 arrived off Broadway, two moved to London, two turned into films, and others have toured the nation. Come see tomorrow’s plays today at Berkeley Rep. 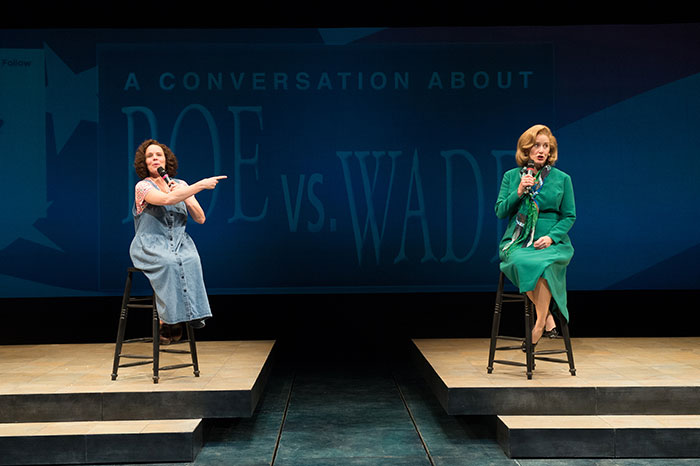 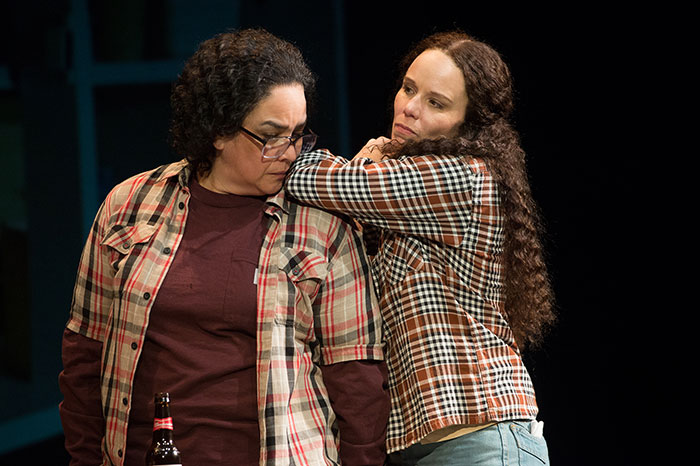 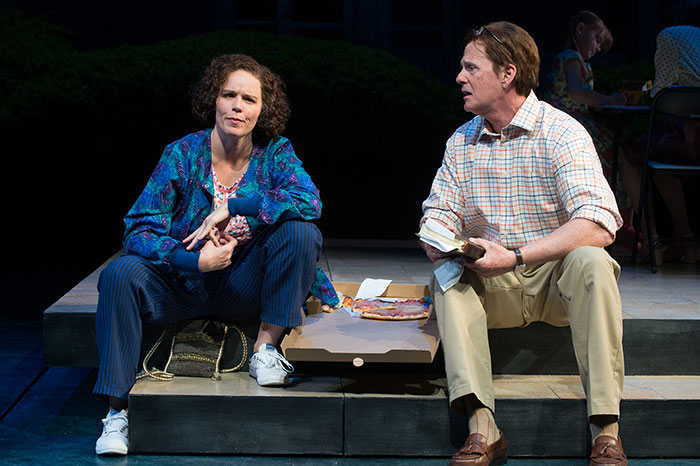 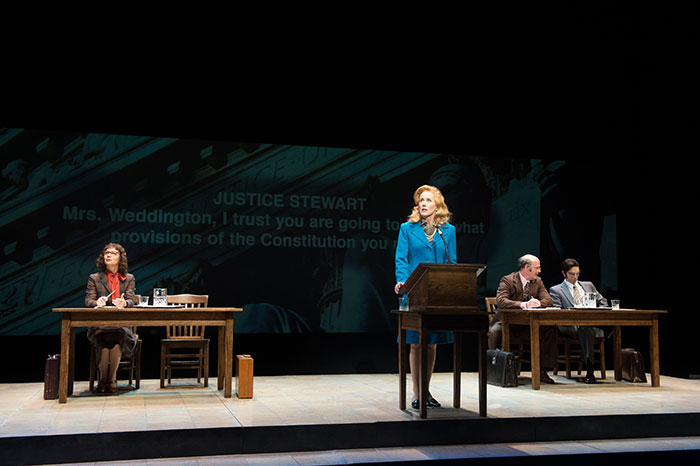 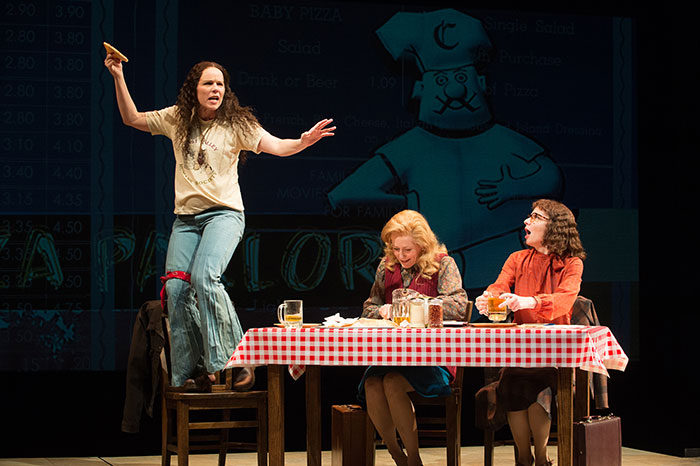 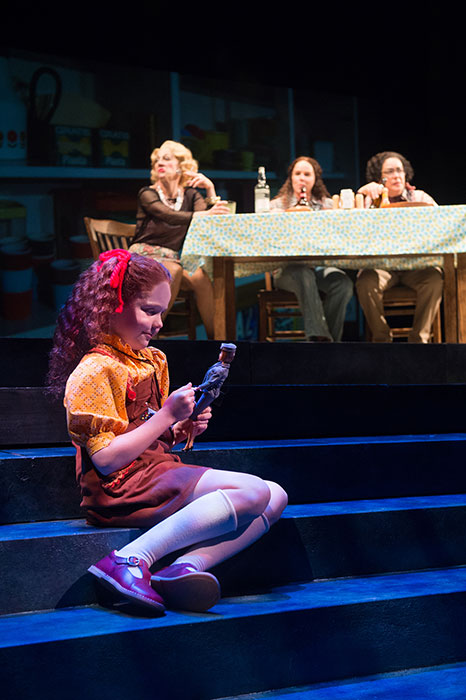 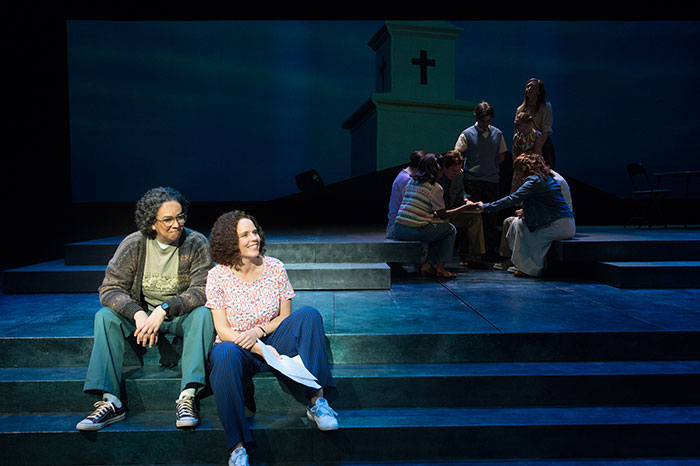 Photo of Catherine Castellanos and Sara Bruner by Jenny Graham. 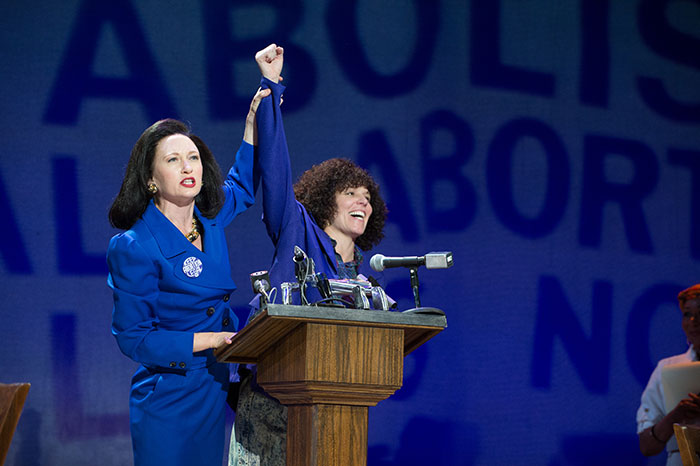 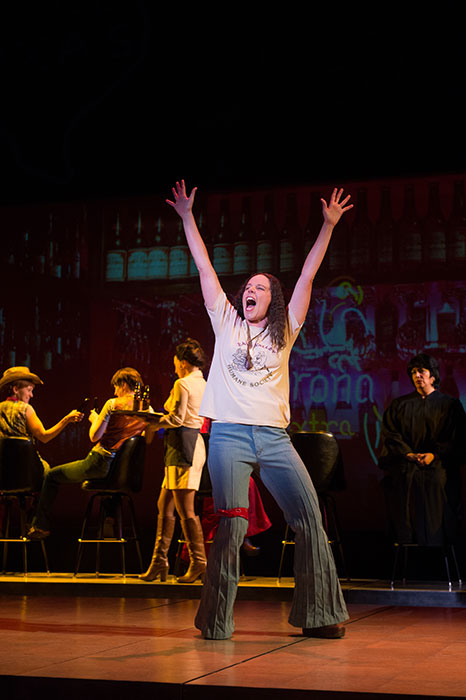 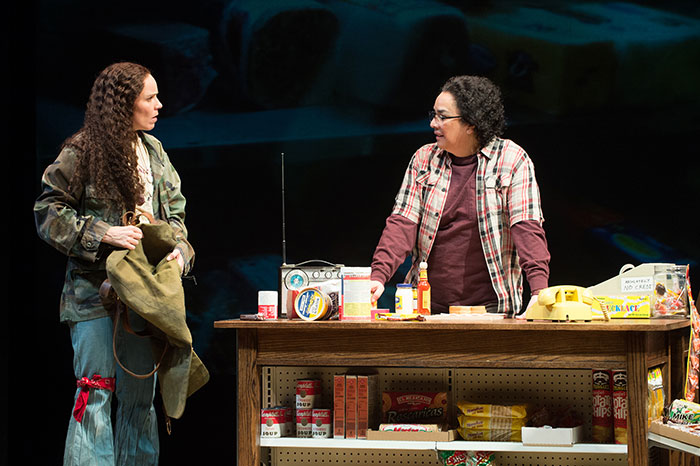