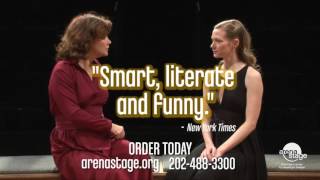 The City of Conversation

Georgetown hostess Hester Ferris runs in an elite circle, opening her home for political foes to lay down arms and raise a glass. When her son’s formidable, conservative wife comes on the scene, the parlor pleasantries of D.C.’s past descend into entrenched posturing and an ultimatum that could implode the family. Follow the Ferris clan from the end of Carter’s presidency through the Reagan era and into Obama’s game-changing inauguration in this “smart, literate and funny” (The New York Times) inside look at the theater of politics and the politics of conversation.

The City of Conversation is generously sponsored by Andrew R. Ammerman and the David Bruce Smith Foundation.

MARGARET COLIN (Hester Ferris) lives in NYC, where she first began acting at age 19 on the TV series The Edge of Night. This marks her first time at Arena Stage and working in D.C. Broadway has welcomed her in The Columnist, Arcadia, A Day in the Death of Joe Egg, Old Acquaintance and Jackie: An American Life (which was her Broadway debut). She toured China in The Pentagon Papers playing Katharine Graham. She has had series leads on several TV shows, including Gossip Girl, Leg Work, Now and Again, Chicago Hope, Foley Square and others. She saved the world in Independence Day and rocked it in Something Wild in addition to appearing in many other feature, indie and cable films. Very grateful.

CAROLINE HEWITT (Anna Fitzgerald) makes her Arena Stage debut. In the Greater D.C. area she appeared at Baltimore’s Center Stage in Twelfth Night and The Rivals. Other recent favorites include Tamburlaine the Great (Theatre for a New Audience), Warrior Class (Alley Theater), John Doyle’s The Caucasian Chalk Circle (American Conservatory Theater) and Arcadia and The Winter’s Tale (Chautauqua Theater Company). She was recently seen on video as Mary Lou in the David Bowie musical Lazarus at New York Theatre Workshop. Caroline majored in French at Vassar College and received her M.F.A. in acting at American Conservatory Theater. Her translations and adaptations include Rose: The Australian Night and Howards End. She is a founding member of The (Blank) Space acting collective.

ANN McDONOUGH (Jean Swift) is happy to be making her Arena Stage debut, having grown up in Baltimore. At Lincoln Center Theater, she performed in Abe Lincoln in Illinois and Dinner at Eight. She was in the original production of A.R. Gurney’s The Dining Room and performed in the show again 25 years later when the cast won a Drama Desk Award for Best Ensemble. Also in New York, she appeared in the original productions of Sister Mary Ignatius Explains It All for You, What I Did Last Summer, Mastergate, Uncommon Women and Others and Fables for Friends. At Long Wharf Theatre in New Haven she performed in 12 productions, most recently Our Town (Mrs. Soames). On TV she appeared on Law & Order, The Good Wife and All My Children (Esther).

TODD SCOFIELD (George Mallonee) is happy to be making his Arena Stage debut. Over the past 13 years, he has worked with Shakespeare Theatre Company (As You Like It, The Taming of the Shrew, The Importance of Being Earnest, Twelfth Night), Folger Theatre (The Tempest, Measure for Measure, Henry VIII, Mary Stuart), Round House Theatre (The Beauty Queen of Lenane, NSFW, Stage Kiss), Theater J (C.S. Lewis in Freud’s Last Session, Bal Masque), Adventure Theatre (Winnie the Pooh), Olney Theatre Center and Ford’s Theatre. Outside of the D.C. area, Todd worked at Arden Theatre Company and spent four seasons at the North Carolina Shakespeare Festival. On TV, he was seen in A recurring role on seasons three and five of The Wire.

MICHAEL SIMPSON (Colin Ferris/Ethan Ferris) is happy and humbled to be making his Arena Stage debut. He most recently performed as Colin/Ethan in The City of Conversation at Lincoln Center Theater. He last performed in D.C. as an understudy in The Guardsman at the Kennedy Center. Additional credits include The Glass Menagerie at The Old Globe in San Diego, Electra at Pittsburgh Public Theater, Tennis in Nablus at Alliance Theatre in Atlanta and The Whipping Man at Dorset Theatre Festival. Film credits include the upcoming Liv and TV credits include The O.C., House and The Cleaner. Michael was educated at The Juilliard School.

TYLER SMALLWOOD (Young Ethan) is nine years old and excited to make his professional theater debut! He has previously performed with Adventure Theatre MTC in Aladdin, Alice in Wonderland and Rats! The Musical. He also studies drama at Georgetown Day School. When he’s not on stage, Tyler is usually playing some kind of sport (most often, baseball). Tyler thanks his parents, sister, grandparents and teachers for making this experience possible.

JJANA VALENTINER (Carolyn Mallonee) is delighted to make her Arena Stage debut. Other D.C. appearances include originating the role of Stage Manager in Our Suburb at Theater J (director Judith Ivey), Sandra in One Flew Over the Cuckoo’s Nest at Round House Theatre, Audrey in As You Like It at Folger Theatre, First Lady in F*cking A at Studio Theatre, Coriolanus at Shakespeare Theatre Company, Leopard in Zomo the Rabbit at Imagination Stage, Zookeeper in Birds of a Feather at Hub Theatre (Helen Hayes Award nomination, Best Ensemble), Electra in The Oresteia at Constellation Theatre Company and Sabina in The Skin of Our Teeth at Rorschach Theatre. Jjana premiered her one woman show, Funeral Potatoes, in D.C. to sold-out audiences in 2009 and also works as a professional makeup artist.

CAEDEN WHITE (Young Ethan u/s) is honored to be a part of The City of Conversation as his first collaboration with Arena Stage. A protégé of Linda Townsend Management, Caeden loves to act both on stage and on-camera. He enjoys modeling and has done catalogue work for Magic Cabin in addition to appearing in Weddings Unveiled. When he is not performing, Caeden enjoys studying dinosaurs and building his own Lego creations. He is thankful for the opportunity to work with such talented individuals at Arena Stage and would like to thank his family for their love and enthusiastic support.

ANTHONY GIARDINA (Playwright)’s first play, Living at Home, was produced in Arena Stage’s “In the Process” series in the Old Vat Room in 1977, before moving on to its New York premiere at Playwrights Horizons. Arena Stage subsequently produced two more of his plays—a commissioned adaptation of An American Tragedy and The Child. His other plays, including Scenes from La Vie de Boheme, The Beach, Black Forest and Custody of the Eyes, have been produced at Manhattan Theatre Club, Long Wharf Theatre, Yale Repertory Theatre, Seattle Repertory Theatre and Cleveland Play House. The City of Conversation, which premiered at the Mitzi E. Newhouse Theater at Lincoln Center in May 2014, was nominated for both the Outer Critics Circle and Drama Desk Awards for Best Play of the 2014/15 season. The play is now being developed as a three-part miniseries on FX. In addition to his work as a playwright, Anthony has published five novels and a book of short stories. His most recent novels, “White Guys” and “Norumbega Park,” were published by Farrar, Straus and Giroux. He is a regular visiting professor at the Michener Center for Writers at The University of Texas at Austin.

DOUG HUGHES (Director) makes his Arena Stage debut. His previous D.C. productions are Hughie and The Little Foxes (Helen Hayes Award nomination, Best Director), both with Shakespeare Theatre Company. Broadway productions include Outside Mullingar, The Big Knife, An Enemy of the People, Born Yesterday, Elling, Mrs. Warren’s Profession, Oleanna, The Royal Family (Tony Award-nominated revival), A Man for All Seasons, Mauritius, Inherit the Wind (Tony Award-nominated revival), A Touch of the Poet, Frozen (Tony Award nomination, Best Director) and Doubt, for which he won the Tony Award for Best Director. Off-Broadway productions include The City of Conversation, Death Takes a Holiday (Drama Desk Award nomination, Best Director of a Musical), The Whipping Man, Engaged, The Heart Is a Lonely Hunter, Flesh and Blood and Defiance. Additional awards include the Drama Desk, Outer Critics Circle, Lucille Lortel, Obie and Callaway.

JOHN LEE BEATTY (Set Designer) previously designed for Arena Stage’s The Tot Family (1976) and A Streetcar Named Desire (1978). His Broadway credits include Disgraced, The Heidi Chronicles, Chicago, The Nance, Outside Mullingar, Venus in Fur, Other Desert Cities, Good People, Rabbit Hole, After Midnight, The Color Purple, Doubt, Proof, The Sisters Rosensweig, Talley’s Folly, Fifth of July, A Delicate Balance, The Heiress, The Last Night of Ballyhoo, Ain’t Misbehavin’ and Abe Lincoln in Illinois. Off-Broadway credits include Dada Woof Papa Hot; Shows for Days; The City of Conversation; and Much Ado About Nothing and King Lear in Central Park. Designer of more than 100 Broadway shows, he is the recipient of multiple Tony, Obie, Outer Critics Circle and Drama Desk Awards and is a member of the Theater Hall of Fame.

CATHERINE ZUBER (Costume Designer)’s received Tony Awards for The King and I, The Royal Family, South Pacific, The Coast of Utopia, The Light in the Piazza and Awake and Sing!, and nominations for Golden Boy, How to Succeed…, Born Yesterday, Seascape, Dinner at Eight (Outer Critics Circle Award) and Twelfth Night. Additional Broadway credits include Fiddler on the Roof, Gigi (Drama Desk Award), The Bridges of Madison County, Macbeth, Outside Mullingar, The Big Knife, Enemy of the People, Women on the Verge…, Joe Turner’s Come and Gone, The City of Conversation, Blood and Gifts, Oleanna, Cry-Baby, Mauritius, Doubt, Little Women, Ivanov, Triumph of Love, The Sound of Music and The Red Shoes. TV credits include Peter Pan Live and The Sound of Music Live. Awards include Henry Hewes, Lucille Lortel, Ovation and Obie Awards.

TOM WATSON (Wig Designer) is head of the wig and makeup department at the Metropolitan Opera. He has designed wigs for more than 70 Broadway productions. Current and recent Broadway designs include Wicked, Rock of Ages, How to Succeed…, The Addams Family, Annie, Act One, You Can’t Take it With You, The King and I, The Sound of Music National Tour, Dames at Sea, Therese Raquin and the current revival of Fiddler on the Roof. His designs can also be seen in the upcoming production of Bright Star.

AMBER DICKERSON (Stage Manager) has spent over a decade working at Arena Stage and is delighted to return after spending the last several years in New York, working on Motown, the Musical with Charles Randolph-Wright. Other recent credits include The Secret Garden with Marcia Milgrom Dodge; Pride and Prejudice and The Whipping Man with Hana Sharif; Vanya and Sonia and Masha and Spike with Aaron Posner; Pullman Porter Blues with Lisa Peterson; The Normal Heart with George C. Wolfe; Trouble in Mind with Irene Lewis; Dreamgirls with Robert Longbottom (national tour); and Looped with Valerie Harper and Rob Ruggiero in Florida and D.C. Additional credits include Syracuse Stage, Ogunquit Playhouse, Berkshire Theatre Festival and Heritage Repertory Theatre. Thanks to God and her family for their continuous love and support!

RACHAEL DANIELLE ALBERT (Assistant Stage Manager) is thrilled to return to Arena Stage after working on Erma Bombeck: At Wit’s End. Her credits include Bright Star (Kennedy Center, pre-Broadway); Up Here, Ether Dome and Peer Gynt (La Jolla Playhouse); Snakeskin (Malashock Dance and SACRA/PROFANA); Rich Girl (The Old Globe); and The Last Days of Judas Iscariot (Stage 773). She is a founding member of Ubuntu Theater Project, where she stage managed The Radicalisation of Bradley Manning, Grounded, Waiting for Lefty, Marguerite to Maya Angelou, Dance of the Holy Ghost, Fool for Love, Here Lies Henry, Dutchman and Yellowman at site-specific locations across Berkeley, Oakland and San Francisco. She received her M.F.A. from the University of California, San Diego and her B.F.A. from the University of Michigan. Proud AEA member. 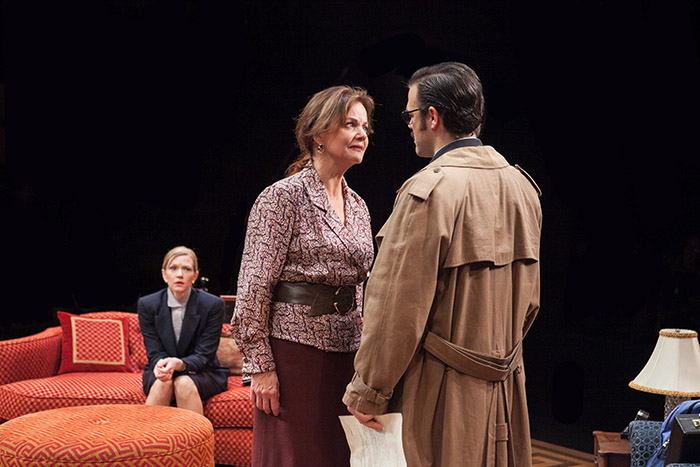 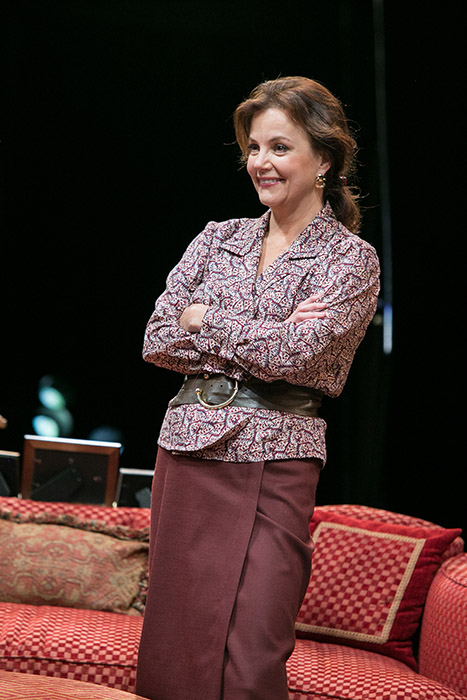 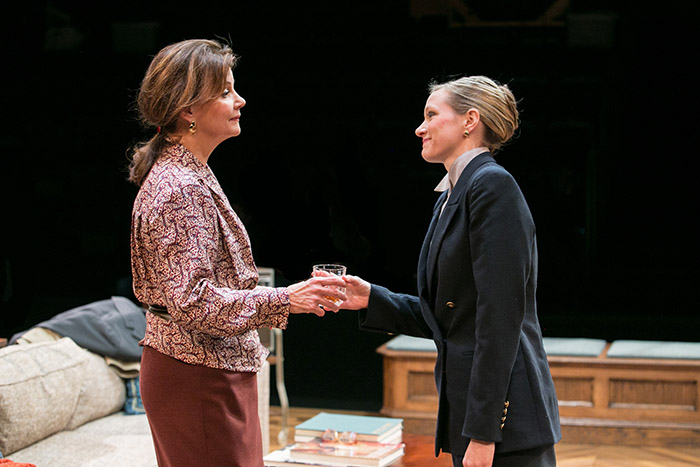 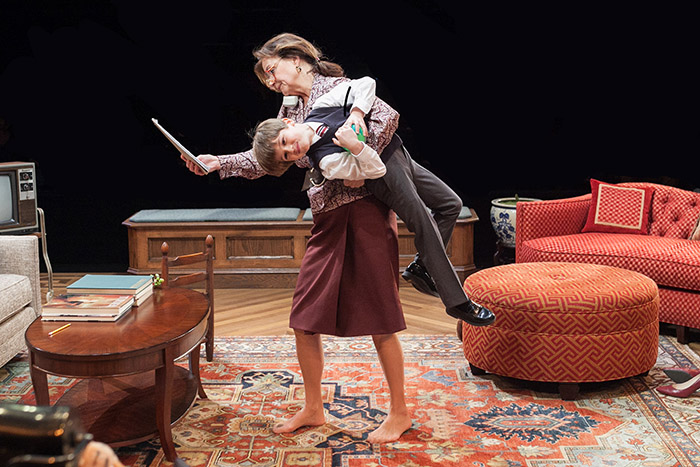 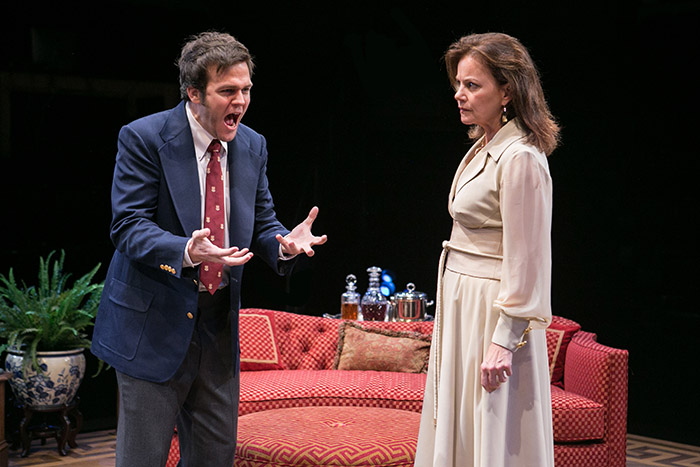 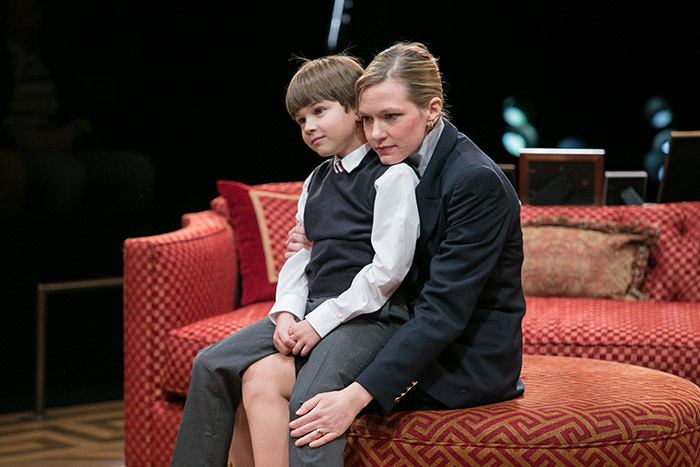 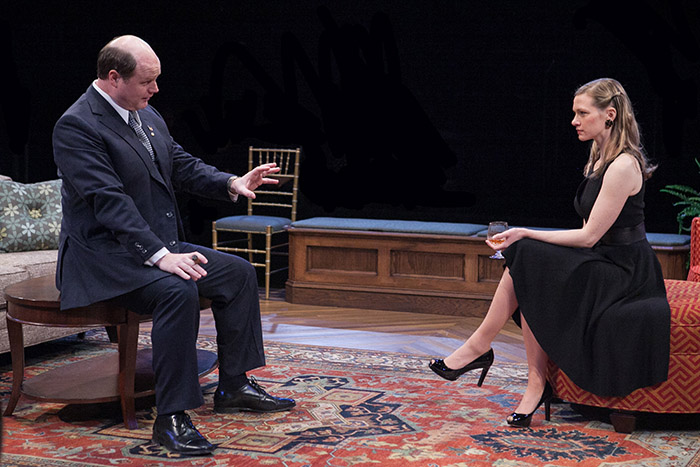 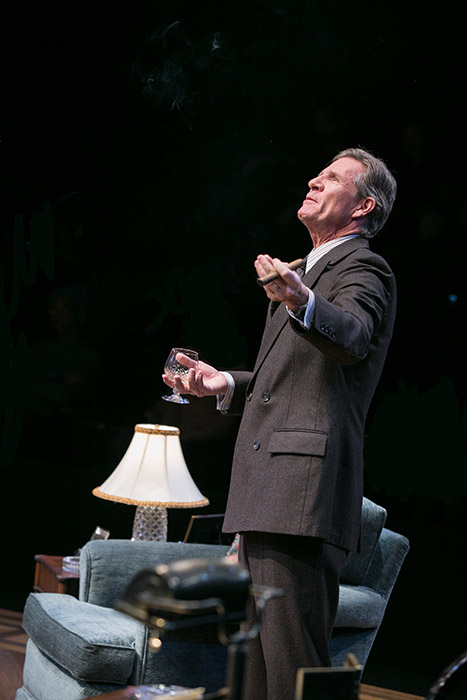 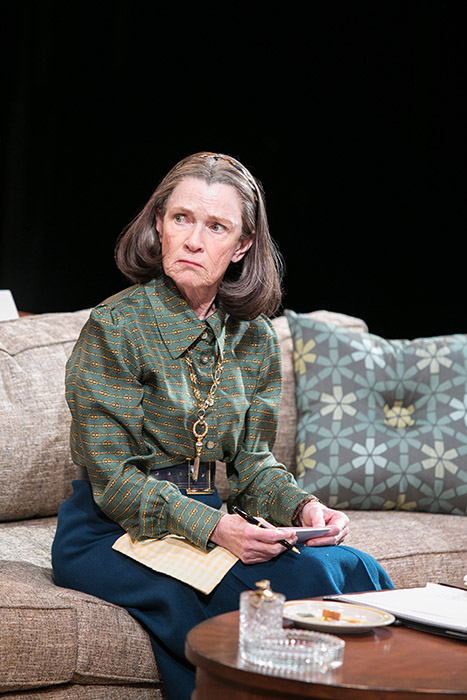 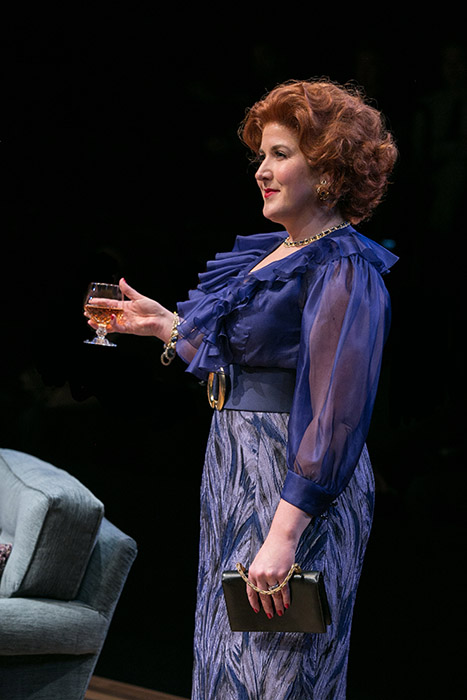 The City of Conversation program