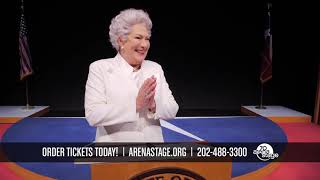 The feisty and unadulterated life of legendary Texas Governor Ann Richards is revealed in a stunning performance written by Emmy Award-winning actress and writer Holland Taylor (The Practice, Two and a Half Men). Now an icon, both heroic and hilarious, Ann Richards is profoundly inspiring. While her leadership as a woman couldn’t be more timely, she remains truly a woman for all seasons. Jayne Atkinson (House of Cards, Criminal Minds) reprises her well-received role in this intimate chronicle of Richards’ legacy and how she was determined to make her mark on the world. “Frank, funny and warm” (New York Times), Ann is a captivating tribute to Richards’ life as an activist, politician and feminist champion.

Ann is generously sponsored by Decker Anstrom and Sherry Hiemstra.

Ann runs approximately one hour and 35 minutes with one 15-minute intermission.

JAYNE ATKINSON (Ann Richards) has enjoyed a long and varied career as an actress, director and producer. A graduate of Northwestern University and Yale Drama School, she has appeared in regional theater, Off-Broadway and Broadway. Jayne made her Broadway debut in a revival production of Arthur Miller’s All My Sons. Other Broadway credits include The Rainmaker (Tony nomination), Our Town with Paul Newman, Enchanted April (Tony nomination, Drama Desk nomination, Outer Critics Circle Award) and Blithe Spirit with the wonderful Angela Lansbury. She has also appeared Off-Broadway in a number of productions, including The Art of Success (Drama Desk nomination), The Skriker (Drama Desk nomination), How I Learned to Drive and Vagina Monologues. Her feature film credits include Free Willy (1 & 2), The Village and Syriana. On television she is best known for her role as Secretary of State Catherine Durant on the popular Netflix Series House of Cards. Other favorites are Karen Hayes in the award-winning series 24 and Erin Strauss on Criminal Minds, and most recently she can be seen opposite Tea Leoni as Vice President Teresa Hurst on Madam Secretary. Directing and producing credits include benefit productions of Motherhood Out Loud and Can You Hear Me, Baby? for WAM Theatre and the Berkshire Festival of Women Writers. She also runs Jadana Productions, which specializes in entertainment development. Jayne’s most recent regional production was Ann by Holland Taylor at the Dorset Theatre in collaboration with WAM Theatre, directed by WAM’s Producing Artistic Director Kristen van Ginhoven. Among the many similarities that Jayne has found between her and Ann, one of her favorites is they both just loved to find the most joy in life. She is married to actor Michel Gill. Together they have one son.

SHERRI L. EDELEN (Ann Richards Understudy) last appeared at Arena in Dave. Other Arena credits include Vanya…Spike, My Fair Lady and Cabaret. She received the Helen Hayes Award for Les Miserables and Side Show at Signature Theatre and a Barrymore Award for The Light in the Piazza at the Philadelphia Theatre Company. She performed in the NY Workshops of Freaky Friday and the Broadway-bound Dave. Other credits include Copenhagen at Theatre J, Romeo and Juliet at Folger Theatre, Outside Mullingar at Fusion Theatre Company and Gypsy at Signature Theatre. National tours include Me and My Girl and Nunsense. She performed at the Kennedy Center, Shakespeare Theatre, Olney Theatre, Ford’s Theatre and Round House Theatre for over 20 years. Next up: The Humans at Olney Theatre Center spring 2020.

HOLLAND TAYLOR (Playwright) wrote and starred on Broadway in Ann, her one-woman show about the late Texas Governor Ann Richards (Tony Award nomination for Best Actress, Drama Desk and Drama League nominations, and the Outer Circle Critics award for Best Solo Performance). The filmed version of Ann is available on Broadway HD. New York: Bess in Breakfast with Les and Bess; Butley, opposite Alan Bate; The Cocktail Hour and the historic flop, Moose Murders. More recently: The Front Page (Broadway); Ripcord, (Manhattan Theatre Club). In Los Angeles: Kindertransport, and The Unexpected Man. She has given narrations for the Los Angeles Philharmonic, and narrated the Harry Potter Suite (Chicago Symphony Orchestra). Her film credits include: Romancing the Stone, Jewel of the Nile, To Die For, Next Stop Wonderland, One Fine Day, George of the Jungle, The Truman Show, Happy Accidents, Spy Kids (2 & 3), Keeping the Faith, Legally Blonde, and Baby Mama. Television: seven Emmy nominations and winning Best Supporting Actress in a Drama for the sexy, brilliant Judge Roberta Kittleson on The Practice. TV starring roles include: The Powers that Be, Bosom Buddies, with Tom Hanks, and Two and a Half Men. Current projects: Mr. Mercedes; Gloria with Julianne Moore.

KRISTEN VAN GINHOVEN (Director) is the artistic director of WAM Theatre, located in the beautiful Berkshires of Western Massachusetts. WAM’s vision is to create opportunity for women and girls through a mission of theater as philanthropy. WAM has donated over $65,700 to organizations taking action in girls' education, women’s leadership, teen pregnancy prevention, sexual trafficking awareness, midwife training and more. Kristen is a member of the 2013 Lincoln Center Director’s Lab and the prestigious Michael Langham Workshop for Classical Direction at the Stratford Festival of Canada. WAM credits include Ann (co-production with Dorset Theatre Festival), In Darfur (New England premiere) and Emilie (New England premiere). Elsewhere, Kristen’s selected directing credits include Disgraced, I and You (Chester Theatre), The Whale (Adirondack Theatre Festival), 10 Minute Play Festival (Barrington Stage Company) and Petticoats of Steel (Capital Repertory Theatre). She has an MA from Emerson College, where she received the Presidential Fellowship. www.wamtheatre.com

JULIANA VON HAUBRICH (Set Designer) is making her Arena Stage debut. In NYC, Juliana designed opera and theater productions for The Juilliard School, as well as a National Tour for The Acting Company. She also designed for theater (Echo Theatre Co.) and television (Star Trek NG/Voyager and Babylon 5) on the West Coast, earning a Best of LA nomination for her design of Ghosts in the Cottonwoods by Adam Rapp. Currently, Juliana is an associate artist and scenic designer for WAM Theatre, located in the Berkshires, designing for them as well as Shakespeare & Company, Berkshire Theatre Group, Chester Theatre Company and Dorset Theatre Festival. Juliana received her MFA in Scenic Design from The California Institute of the Arts (Calarts) and is the founding scenic designer for Mosaic Youth Theatre of Detroit.

JESS GOLDSTEIN (Costume Designer)’s Arena Stage credits include The Little Foxes, Shakespeare in Hollywood, A Wonderful Life, Baskerville and Tintypes. Broadway and New York credits include: On the Town; Jersey Boys; Newsies; Proof; How I Learned to Drive; Take Me Out; Love! Valour! Compassion!; and Buried Child. He received a 2005 Tony Award for The Rivals and Tony nominations for Henry IV and The Merchant of Venice. Jess also designs opera, most notably Il Trittico (Metropolitan Opera), and his film designs include Tony Goldwyn's A Walk on the Moon. He is a graduate of the Yale School of Drama and has taught costume design there since 1990. He was the 2012 winner of the Michael Merritt Award for Excellence in Design and Collaboration and 2015 recipient of the Irene Sharaff Award for Lifetime Achievement.

ANDI LYONS (Lighting Designer) is delighted to be working on this timely production of Ann as her introduction to Arena Stage and its politically astute audiences. Other favorite credits include WAM Theatre’s Emilie: La Marquise Du Châtelet Defends Her Life Tonight; La MaMa E.T.C.’s Sole Sisters; Theater for the New City’s Distant Music; Tri-Cities Opera’s Tosca; Stageworks/Hudson’s Imagining Madoff and I Am My Own Wife; Des Moines Metro Opera’s Street Scene; and Capital Repertory Theatre’s Looking Over the President’s Shoulder. She is resident lighting designer and professor of Theatrical Design and Technology at the University at Albany, SUNY. Andi is a graduate of the Yale School of Drama and a proud fellow of USITT.

ANNA BARANSKI (Stage Manager) is a graduate of the University of California, Irvine, with an MFA in Stage Management, and has been a seasonal stage manager with the Dallas Theater Center since 2011. She has enjoyed stage managing at the following select theaters: Triad Stage, Musical Theater West, Circle Theater, Casa Mañana Theatre, Theatre Arlington, Kids Who Care, Inc., Trinity Shakespeare Festival, Texas Shakespeare Festival and Second Thought Theatre. Anna completed her professional internship at the Guthrie Theater in Minneapolis.

MARNE ANDERSON (Assistant Stage Manager) is excited to be at Arena Stage for her 10th season, starting as an Allen Lee Hughes Fellow in 2009. Some highlights include Indecent, Dave, Two Trains Running,The Great Society, Nina Simone: Four Women, A Raisin in the Sun, Moby Dick, All the Way, Erma Bombeck: At Wit’s End, King Hedley II,Five Guys Named Moe, Mother Courage and Her Children, The Mountaintop, Metamorphoses, Long Day’s Journey into Night, Arabian Nights and Duke Ellington’s Sophisticated Ladies. She is a graduate of the University of North Carolina School of the Arts and a proud member of Actors’ Equity Association. 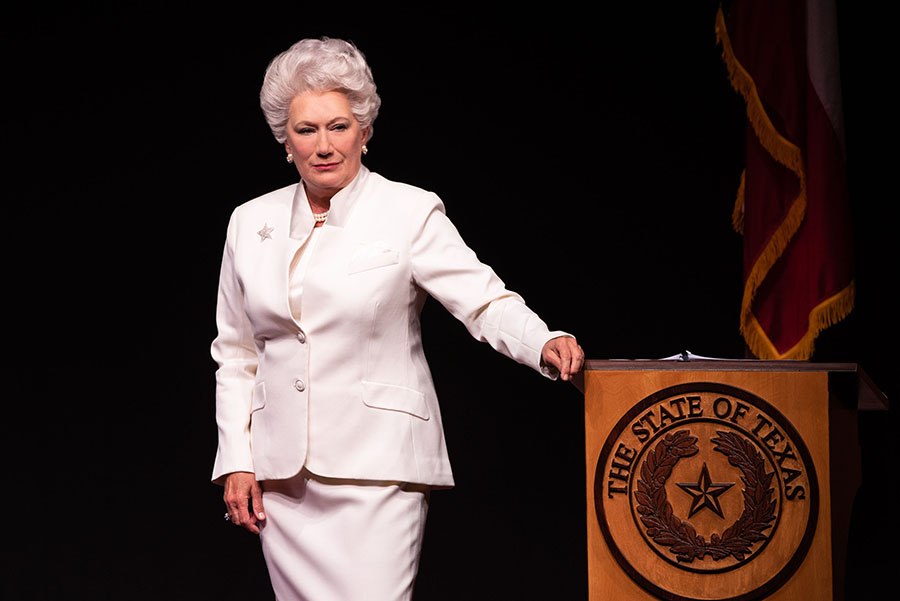 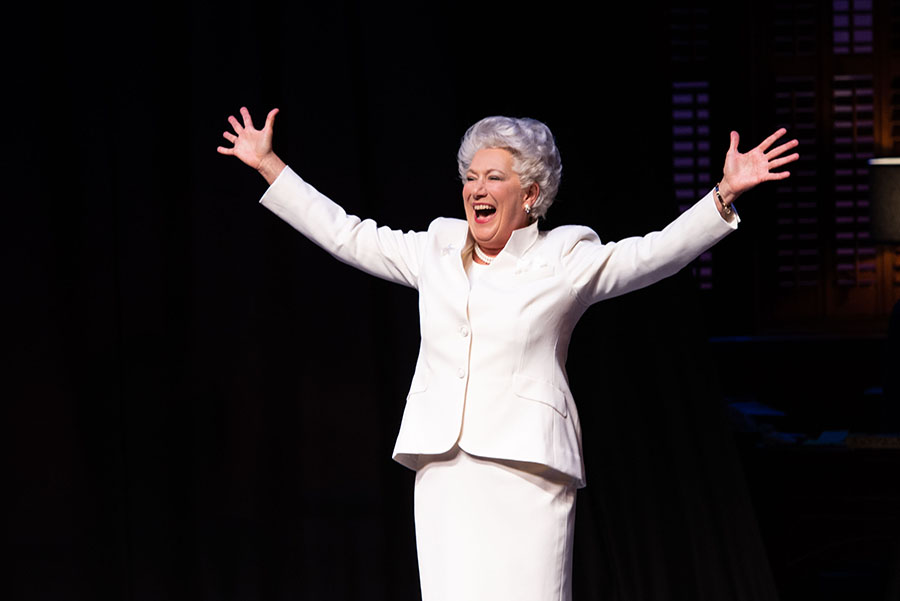 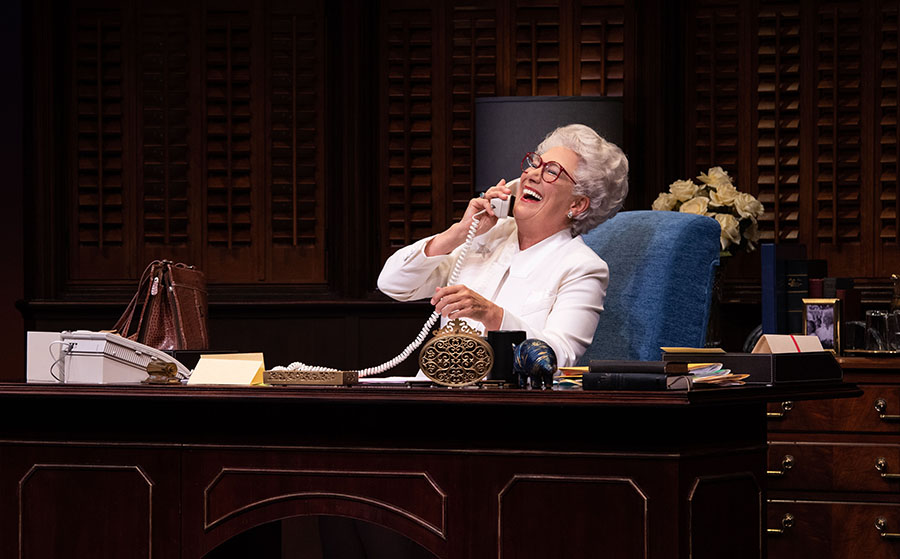 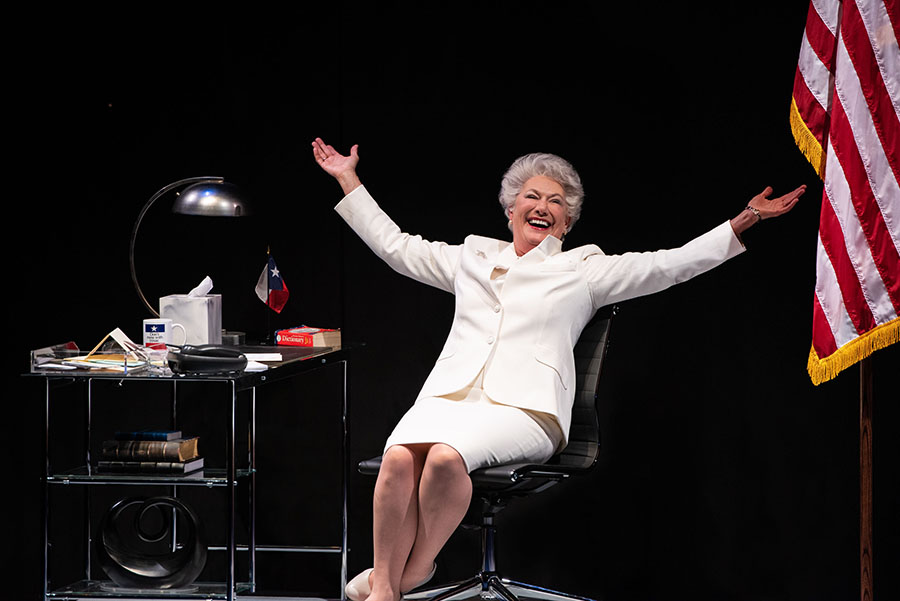 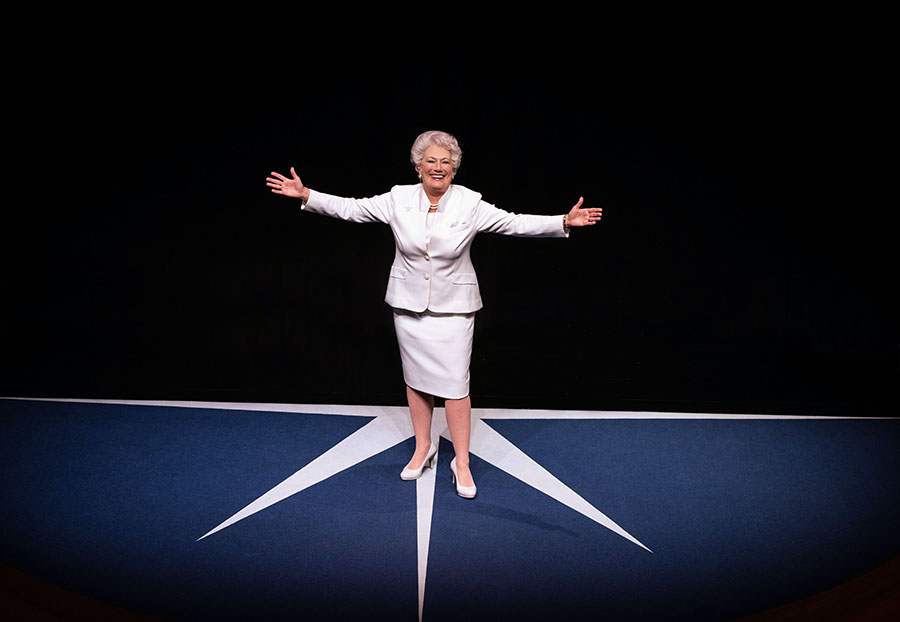 A Shining Talent: Jayne Atkinson in Ann at Arena Stage

Jayne Atkinson takes on a Legend with Ann at Arena Stage

Jayne Atkinson on Being Ann Richards

Jayne Atkinson is playing Governor Ann Richards: “If she was alive today, she’d say we have to stop whining and start participating.”

Right to be Forgotten