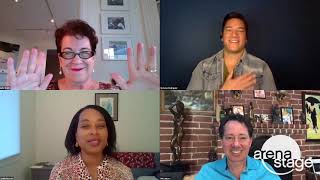 A weekly Salon featuring artists and leaders of Arena Stage.

These half-hour-long weekly conversations will include some of our best thinkers and creative firebrands. Molly will sit down with a variety of artists and leaders to discuss new ideas they are excited about and glimmers of hope for the future.

Arena Stage hosts community conversations that provide an opportunity for members of the Washington, D.C., community to engage in civil discourse about social and political issues, and will demonstrate — with the goal — that people of diverse viewpoints can have fruitful dialogues with one another.