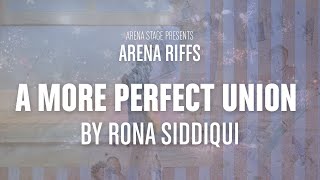 Themes in the musical series include the grief and void created by the pandemic, the nationwide reckoning on racial injustice, finding joy in difficult times and the exploration of one’s relationship to the country.

The self-produced, self-contained finished pieces will be presented by Arena Stage. Each original musical will be 20 – 30 minutes long and will be available to stream on Arena’s website.

Arena Riffs is free and open to the public to watch, but reservations are encouraged.  All performances begin at 7 p.m. EDT.

Supporting Sponsorship for Arena Riffs is generously provided by the Artistic Director's Fund and Sheila Stampfli.

Abigail and Shaun Bengson are a married composing and performing duo based in New York City and Vermont who have performed across the country and around the world. Their video, The Keep Going Song, has been viewed over 4 million times. Three of their singles have been featured on “So You Think You Can Dance” (FOX). Their theater work includes The Keep Going Song (Actor’s Theatre of Louisville), Hundred Days (La Jolla Playhouse, New York Theatre Workshop, U.S. Tour), The Lucky Ones (Ars Nova), Where the Mountain Meets the Sea (ATL’s Humana Festival), Anything That Gives Off Light (Edinburgh Theatre Festival), You’ll Still Call Me By Name (New York Live Arts, Jacob's Pillow), and Iphigenia in Aulis (Classic Stage Company). They have received the Jonathan Larson and Richard Rogers awards and nominations for the Drama Desk, Drama League and Lucile Lortel awards.

Psalmayene 24 is an award-winning playwright, director and actor. Psalm, as his colleagues call him, is currently the Andrew W. Mellon Foundation Playwright in Residence at Mosaic Theater and the Doris Duke Artist in Residence at Studio Theatre. Directing credits include Pass Over by Antoinette Nwandu at Studio Theatre, Native Son by Nambi E. Kelley at Mosaic Theater Company, Word Becomes Flesh (recipient of five 2017 Helen Hayes Awards, including Outstanding Direction of a Play) by Marc Bamuthi Joseph at Theater Alliance and The Shipment by Young Jean Lee at Forum Theater. Psalm was one of the writers of Arena Stage’s film, May 22, 2020, and he was one of the directors of Arena's film, The 51st State. He wrote “Double Entendre”, the fifth episode of Roundhouse Theatre’s ten-part pandemic influenced web series Homebound. His play, Les Deux Noirs (2020 Charles MacArthur Award Nomination for Outstanding Original New Play or Musical and Venturous Capital Grant recipient), is inspired by a legendary 1953 confrontation between famed writers Richard Wright and James Baldwin in a Paris café and received its world premiere production at Mosaic Theater Company. Psalm has received commissions from the African Continuum Theater Company, Arena Stage, Imagination Stage, The Kennedy Center, Theater Alliance, Solas Nua, Mosaic Theater Company and Theatrical Outfit. His one man play, Free Jujube Brown!, is recognized as a seminal work in Hip-Hop Theatre and is published in the anthology, Plays from the Boom Box Galaxy: Theater from the Hip-Hop Generation (TCG). His new play, Dear Mapel, a series of letters to his deceased father, will receive its world premiere production at Mosaic Theater this fall.

Rona Siddiqui is a composer/lyricist based in New York City. She is a recipient of the Jonathan Larson Grant and Billie Burke Ziegfeld award. She was named one of Broadway Women's Fund's Women to Watch. Her show Salaam Medina: Tales of a Halfghan, an autobiographical comedy about growing up bi-ethnic in America, had a reading at Playwrights Horizons (directed by Raja Feather Kelly). Other musicals include One Good Day, Hip Hop Cinderella and The Tin. She is the recipient of the ASCAP Harold Adamson Lyric Award, the ASCAP Foundation Mary Rodgers/Lorenz Hart Award and ASCAP Foundation/Max Dreyfus Scholarship. She has written pieces for Wicked's 16th anniversary commemoration Flying Free, 24 Hour Musicals, Prospect Theater Company, The Civilians, and has performed concerts of her work at The John F. Kennedy Center for the Performing Arts and Feinstein's/54 Below. Rona music directed the Off-Broadway Pulitzer Prize-winning A Strange Loop for which she received an Obie along with the cast and creative team (Playwrights Horizons). She has orchestrated for Broadway Records, Broadway Backwards, NAMT and Pittsburgh Civic Light Opera.