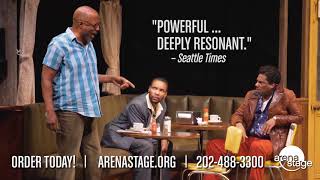 “Perfection … a work by a writer at the peak of his powers.”

.
Additional support is provided by

It’s 1969 and the Civil Rights Movement is sending tremors through Pittsburgh’s Hill District. At the center of the community is Memphis Lee’s diner, slated to be demolished — a casualty of the city’s renovation project. Confronted with a rapidly changing world, Memphis and his regular customers struggle to maintain their solidarity and sense of pride. From Pulitzer Prize-winning playwright August Wilson comes this masterpiece about everyday lives in the shadow of great events, and of unsung citizens who are anything but ordinary. “Mr. Wilson’s most adventurous and honest attempt to reveal the intimate heart of history.” (The New York Times)

makes his Arena Stage debut. Seattle Repertory credits include Another Part of the Forest, I’m Not Rappaport, Gem of the Ocean and Birdie Blue. He is proud to have been a co-founding member of the nationally acclaimed Group Theatre where he appeared in many productions including Sejwiz Banji is Dead and Buffalo Soldiers. Recent productions include To Kill a Mockingbird (Intiman Theatre), Othello (Seattle Shakespeare Company), Cry the Beloved Country and Bud, Not Buddy(Book-It Repertory Theatre), Wine in the Wilderness (ACT Theatre) and Death of a Salesman (Langston Hughes).

makes his Arena Stage debut. He has appeared at Seattle Repertory in Well, The Great Society, Inspecting Carol, Ma Rainey’s Black Bottom, Romeo & Juliet and The Cider House Rules, Part Two. He has also worked with The Shakespeare Theatre Company, Intiman, Lake Tahoe Shakespeare Festival, ACT Theatre, Artists Repertory Theatre, ArtsWest, and Seattle Shakespeare Company, among others. As a playwright, he is the recipient of the American Alliance of Theatre & Education’s Distinguished Play Award for his adaptation of Christopher Paul Curtis’ novel Bud, Not Buddy.

returns to Arena Stage after appearing in every tongue confess and Guess Who’s Coming to Dinner. He appeared on Broadway in Gem of the Ocean and is a “Wilsonian Warrior,” having performed in all but two of Mr. Wilson’s plays. Off-Broadway credits include A Soldier’s Play, Home, Manhattan Made Me, Nightline, Eyes of the American and The Redeemer (Negro Ensemble Company). Regional credits include stop. reset (Goodman); How I Learned What I Learned (True Colors, Round House, Pittsburgh Public Theater, Huntington); the Kennedy Center’s August Wilson’s 20th Century; and others. Film/TV credits include Wolf, Coach Carter, The Lying Game, American Crime, The White Shadow, Good Times, NYPD Blue and The Guiding Light. Eugene is an artist-in-residence at Texas State University and Artistic Director for the Texas State Black and Latino Playwrights Conference. eugeneleeonline.com

is a native of Richmond, VA and currently lives in the D.C. metropolitan area. He returns to Arena Stage after appearing in A Raisin in the Sun. Other area credits include To Kill a Mockingbird as Rev. Sykes in Alexandria, VA; Cinderella The New Musical in Alexandria, VA; Dead Man Walking at the Kennedy Center; and Yet I Stank in Alexandria, VA. He appeared in the Amazon TV series DailyBread and will be in an episode of For My Man, which airs on TV One. A former pro wrestler in the local circuit of VA and NC in the early 90s and a single father of two sons, Frank is several months retired from the Alexandria, VA Police Department.

returns to Arena Stage after appearing in four decades of stage productions, including such roles as Doaker in August Wilson’s The Piano Lesson, Roy Wilkens in Robert Schenkkan’s All the Way and Lonnie in Zora Neale Hurston’s Polk County. Broadway credits include of A Free Man of Color and Julie Taymor’s Tony Award nominated musical Juan Darién. Regionally he was seen as Alonzo in The Tempest and Lucio in Measure for Measure (Folger Theatre); Army in the Persiansand Othello (Shakespeare Theatre Company); Jacques in As You Like It (Utah Shakespeare Festival); Splash Hatch on the “E” Going Down (Yale Repertory); and The Fool in King Lear. David is an Assistant Professor of Acting at Virginia Commonwealth University.

plays include Gem of the Ocean, Joe Turner’s Come and Gone, Ma Rainey’s Black Bottom, The Piano Lesson (Pulitzer Prize winner), Seven Guitars, Fences (Pulitzer Prize winner, Tony Award winner), Two Trains Running, Jitney (Oliver Award winner), King Hedley II and Radio Golf. In 2003, he made his stage debut in his one-man show, How I Learned What I Learned. He received an Emmy Award nomination for his screenplay for The Piano Lesson. Other works include The Janitor, Recycle, The Coldest Day of the Year, Malcolm X, The Homecomingand the musical satire Black Bart and the Sacred Hills. Other awards include eight New York Drama Critics Circle Awards, Rockefeller and Guggenheim Fellowships in Playwriting, a Whiting Writers Award, 2003 Heinz Award, 1999 National Humanities Medal and induction into the Theater Hall of Fame.

is a graduate of the Yale School of Drama and has directed critically-acclaimed premieres and revival productions in theaters across the country including Oregon Shakespeare Festival, Mark Taper Forum, South Coast Repertory, Yale Repertory, Denver Center and Seattle Repertory. As a member of the Cornerstone Theater ensemble, she has developed work for and with various communities such as the Los Angeles River community, the addiction and recovery community, the Hindu community and seniors and their caregivers. She was an artistic associate and Director of the Hispanic Playwright’s Project at South Coast Repertory for seven years, developing work with writers such as Nilo Cruz, Octavio Solis, José Rivera and Karen Zacarías. She is on faculty at University of California, Irvine. www.juliettecarrillo.com

has worked at Arena Stage, Asolo Repertory, Center Stage, Cincinnati Playhouse in the Park, the Kennedy Center, Milwaukee Shakespeare, Opera Lafayette, Opera Royal Versailles, Portland Center Stage, Round House, Shanghai Dramatic Arts Center, Signature Theatre, Skylight Music Theatre, Studio Theatre, Syracuse Stage, Theater J, Wilma Theater and Woolly Mammoth, among many other companies in the United States and abroad. He is a company member at Woolly Mammoth and an associate artist at Olney Theatre Center. Misha is a Helen Hayes Award recipient and a graduate of the St. Petersburg Theatre Arts Academy. He serves as the associate professor of scene and costume design and head of M.F.A. in design at University of Maryland. For more information, visit mishakachman.com.

Arena Stage credits include The Great Society, Nina Simone: Four Women, A Raisin in the Sun, Roe, Moby Dick, All the Way, Erma Bombeck: At Wit’s End, King Hedley II, Five Guys Named Moe, The Mountaintop, Metamorphoses and Duke Ellington’s Sophisticated Ladies. Additional D.C. credits include A Midsummer Night’s Dream and Rosencrantz and Guildenstern Are Dead (Folger Theatre); Angels in America: Parts 1 and 2 (Round House); Wig Out! (Studio Theatre) and The Arsonists, You for Me for You and Mr. Burns, A Post-Electric Play (Woolly Mammoth). She is a graduate of the University of North Carolina School of the Arts and a proud member of Actors’ Equity Association. 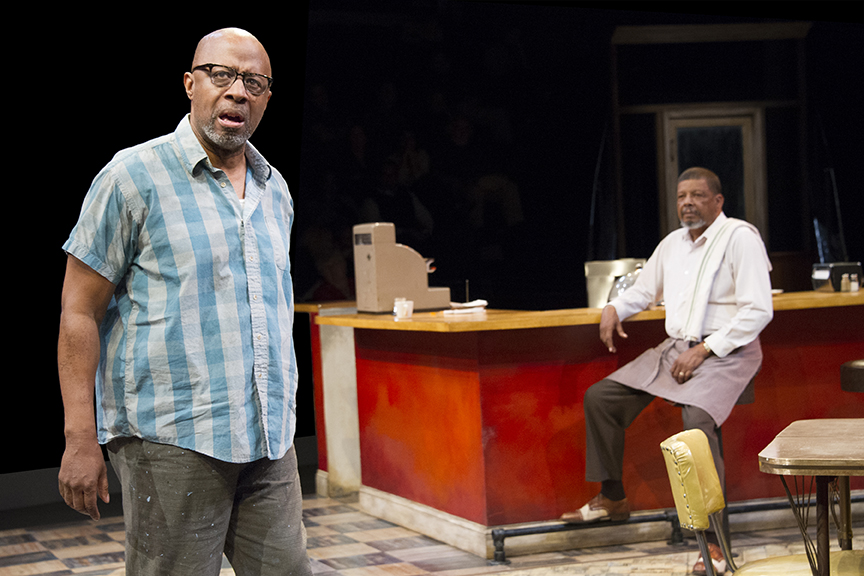 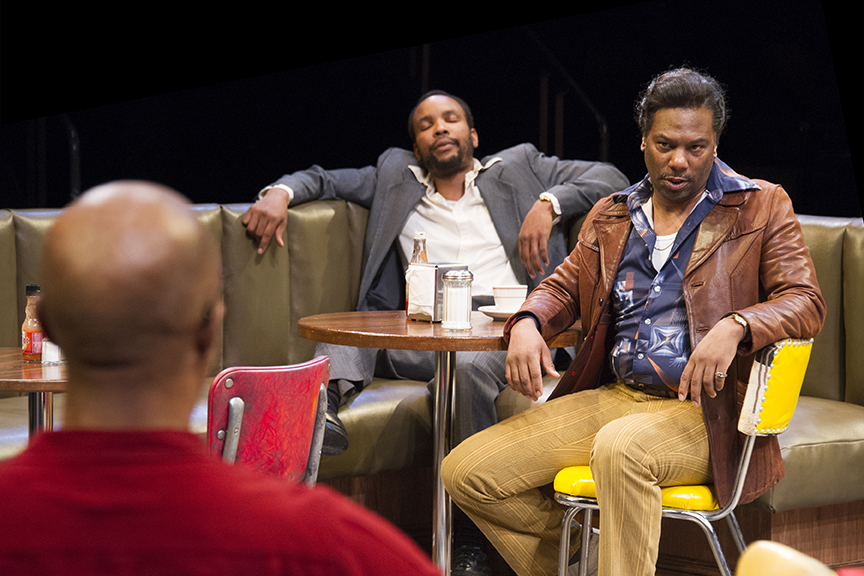 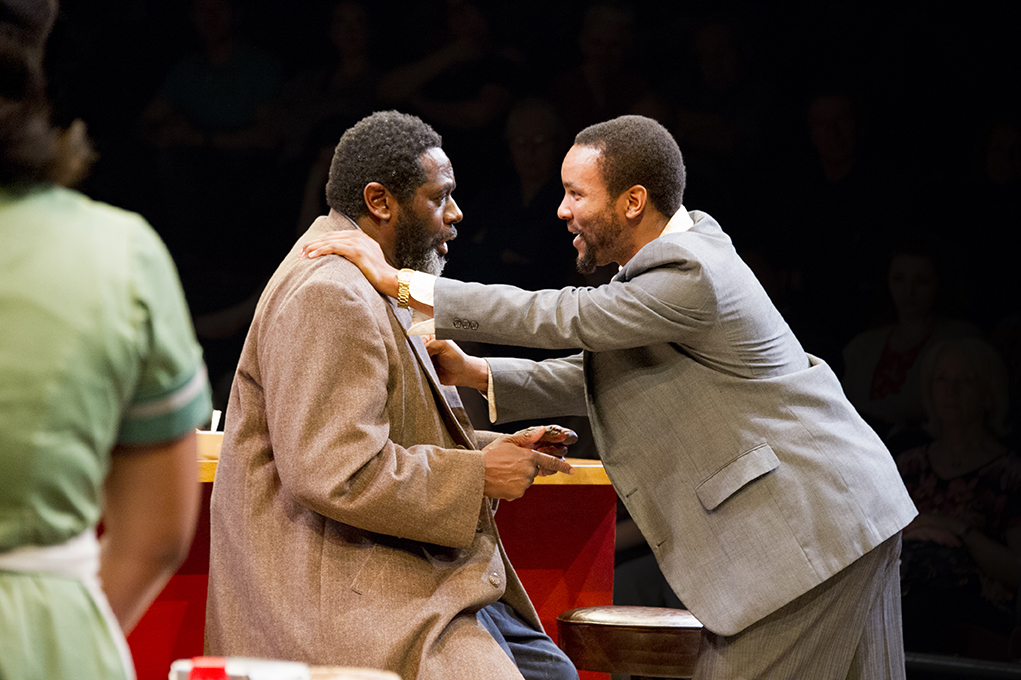 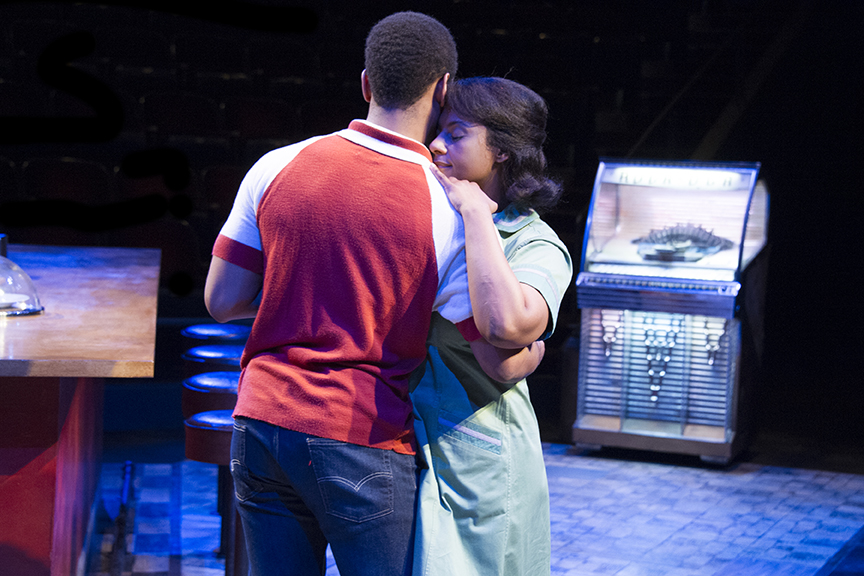 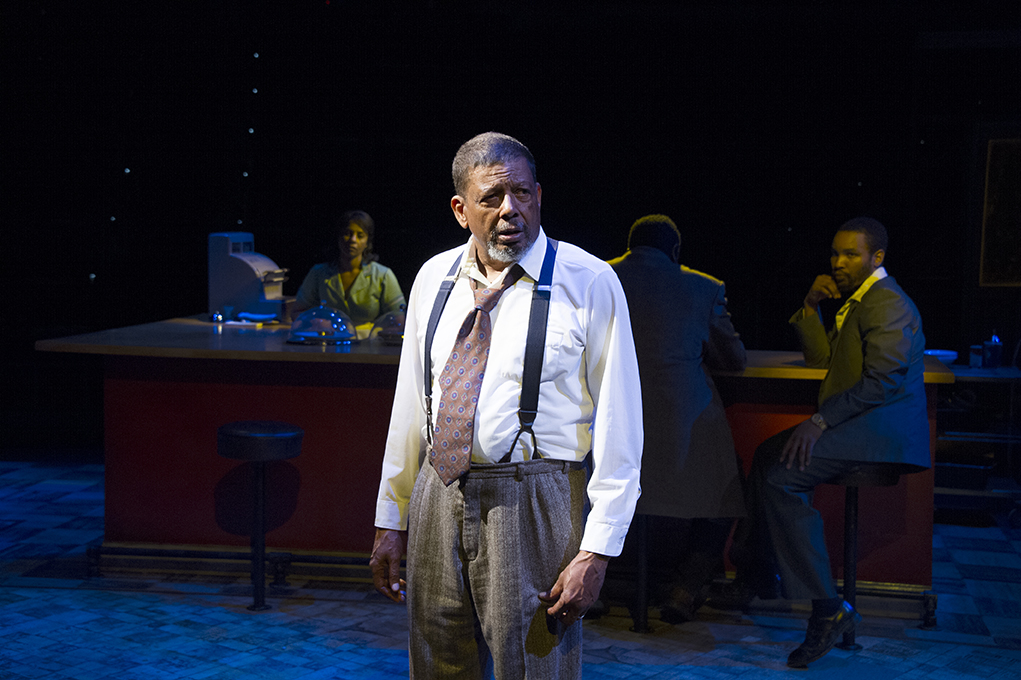 The Yearning, Personhood And Pride In Two Trains Running

Two Trains Running Is Extended Due To Popular Demand