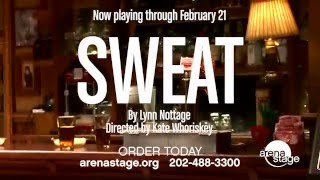 "Nottage is one of our finest playwrights, a smart, empathetic and daring storyteller."

A group of close friends shares everything: drinks, secrets and laughs. But when rumors of layoffs shake up the local steel mill, the fragile bonds of their community begin to fray and a horrific crime sends shock waves across two generations. This gripping world premiere by acclaimed Pulitzer Prize winner Lynn Nottage (Ruined) explores America’s industrial decline at the turn of the millennium by examining the inhabitants of one Pennsylvania town who still struggle to reclaim what’s lost, find redemption and redefine themselves in a new century. Co-commissioned with the Oregon Shakespeare Festival.

JOHANNA DAY (Tracey) won a Helen Hayes Award for her starring role in Arena Stage’s The Rainmaker. Additional Arena credits include Quality of Life and Good People. She was a Drama Desk Award nominee for Second Stage Theatre’s Peter and Jerry, Tony Award nominee for Proof at the Walter Kerr Theatre and won an Obie Award for Appropriate at Signature Theatre. On Broadway, Johanna played Mrs. Kirby in the 2014 revival of You Can’t Take It With You, opposite James Earl Jones and Elizabeth Ashley; and Barbara Fordham in August: Osage County. She appeared in the world premieres of Westport Country Playhouse’s Oblivion and Yale Repertory Theatre’s The Realistic Joneses. Prior to joining Sweat, she created the role of Zippy in Choice. Johanna currently has recurring roles on CBS’ Madam Secretary and Showtime’s The Knick.

KEVIN KENERLY (Brucie) has spent 19 seasons at Oregon Shakespeare Festival where his credits include The Great Society; All the Way; Two Trains Running; The Liquid Plain; Troilus and Cressida; Julius Caesar; The African Company Presents Richard III, Henry IV, Part 1; Throne of Blood; Macbeth; A Midsummer Night’s Dream; Fences; Gem of the Ocean; Tartuffe; The Importance of Being Earnest; Ma Rainey’s Black Bottom; Gibraltar; Topdog/Underdog; King Lear; Romeo and Juliet; Playboy of the West Indies; As You Like It; Life Is a Dream; Stop Kiss; Seven Guitars; Death and the King’s Horseman; Les Blancs; Pride and Prejudice; The Night of the Iguana; The Taming of the Shrew; and Henry IV, Part 2. Additional credits with Studio Theatre, Hilberry Theatre and Attic Theatre (Detroit). Kevin received his B.A. from Olivet College.

TARA MALLEN (Jessie) is artistic director at Rivendell Theatre Ensemble, a professional Chicago-based company. Recent stage credits include the world premieres of Rivendell’s Look, we are breathing and Rasheeda Speaking; Steppenwolf for Young Adults’ How Long Will I Cry; The Walls; and Self Defense, or death of some salesmen. She received two Joseph Jefferson Awards for her work in WRENS (Best Supporting Actress and Best Ensemble) and was nominated for Best Actress for My Simple City. Tara co-conceived and directed the critically-acclaimed premiere of Women at War, an exploration of women in today’s military that played to sold-out houses at Rivendell in the fall of 2014 and is now touring. Screen credits include Steven Soderbergh’s film Contagion, Boss, Chicago Fire, Chicago P.D., the Netflix series Sense8 and the CBS/Sony Pictures pilot Doubt.

KIMBERLY SCOTT (Cynthia) last appeared at Arena Stage as Molly in Joe Turner’s Come and Gone. In the role on Broadway, she was nominated for Tony and Drama Desk Awards. Her most recent theater credits include Head of Passes (Berkeley Repertory Theatre) and Familiar (Yale Repertory Theatre). She spent six seasons at Oregon Shakespeare Festival (OSF) playing roles in Henry IV, Part 2; Ruined; As You Like It; The Further Adventures of Hedda Gabler; and The Pirates of Penzance. As part of OSF’s American Revolutions: The United States History Cycle, she created the roles of Dembi in The Liquid Plain, Amira in Party People, Viola Pettus in American Night and Cynthia in Sweat. Kimberly’s film credits include Love and Other Drugs, World Trade Center, The Abyss and many TV credits. Twitter: @kimaileen

TRAMELL TILLMAN (Chris) is a native of the D.C.-metro area and this show marks his debut at Arena Stage. Tramell received his M.F.A. from the University of Tennessee, Knoxville in 2014. Notable credits include Red Bull Theater’s ‘Tis Pity She’s a Whore (Off-Broadway); New Stage Theatre’s The Last Days of Judas Iscariot, Twelfth Night and A Soldiers Play; Chautauqua Theater Company’s The Tempest and A Raisin in the Sun; and Clarence Brown Theatre’s The Whipping Man, Spamalot and A Christmas Carol. Tramell is grateful for the opportunity to tell such a riveting, relevant story in American history. Enjoy the journey. www.tramelltillman.com

JACK WILLIS (Stan) returns to Arena Stage after appearing in Mother Courage and Her Children, Book of Days, Of Mice and Men and Agamemnon and His Daughters. Broadway credits include Julius Caesar, The Crucible, Art and The Old Neighborhood. Off-Broadway credits include The Resistible Rise of Arturo Ui, World of Mirth, The Iphigenia Cycle and Valhalla. He has appeared in more than 200 productions worldwide and been a company member at Oregon Shakespeare Festival, American Conservatory Theater, American Repertory Theater, Trinity Repertory Company and Dallas Theater Center. Film and TV credits include Toy Story 3, The Talented Mr. Ripley, The Cradle Will Rock, The Out-of-Towners, Love Hurts, I Come in Peace, Problem Child, Law & Order, Ed and Dallas. Jack was awarded a Lunt-Fontanne Fellowship through the Ten Chimneys Foundation.

TYRONE WILSON (Evan) appeared on Broadway in Lettice and Lovage. For the last 22 years, he has been a company member at Oregon Shakespeare Festival and has performed in nearly 50 productions. His favorite credits include the Friar in Much Ado About Nothing, Abernathy in All the Way and The Great Society, Vincentio in The Taming of the Shrew, Elbow in Measure for Measure, Christian in Ruined, Joe Stoddard in Our Town, Sebastian in The Tempest, Carl in Bus Stop, Morocco in The Merchant of Venice, Menelaus in Troilus and Cressida, Godfrey in Crumbs from the Table of Joy, Abioseh in Les Blancs, Tybalt in Romeo and Juliet and Caliban in The Tempest. Tyrone holds an M.F.A. (Yale School of Drama) and B.A. (Middlebury College). Twitter: @ashlandbardman Instagram: @tyronewilsonashland Facebook: Tyrone K Wilson

LYNN NOTTAGE (Playwright) is a Pulitzer Prizewinning playwright and screenwriter. Her plays have been produced widely in the U.S. and throughout the world. They include By the Way Meet Vera Stark; Ruined; Intimate Apparel; Fabulation, or The Re-Education of Undine; and Crumbs from the Table of Joy. Lynn is the recipient of numerous honors including a MacArthur “Genius Grant” Fellowship, Steinberg “Mimi” Distinguished Playwright Award, Dramatists Guild Hull-Warriner Award, inaugural Horton Foote Prize, Helen Hayes Award, Lee Reynolds Award and a PEN/Laura Pels Award. She is the co-founder of the production company Market Road Films. Special thanks to Oregon Shakespeare Festival and American Revolutions: The United States History Cycle, The Lark, McCarter Theatre, Travis Ballenger, Alison Carey, Bill Rauch, Jill Dubiner, Mica Cole, Santo Mirabella, the folks of Reading, Tony Gerber and my family.

JOHN LEE BEATTY (Set Designer) previously designed for Arena Stage’s The Tot Family (1976) and A Streetcar Named Desire (1978). His Broadway credits include Disgraced, The Heidi Chronicles, Chicago, The Nance, Outside Mullingar, Venus in Fur, Other Desert Cities, Good People, Rabbit Hole, After Midnight, The Color Purple, Doubt, Proof, The Sisters Rosensweig, Talley’s Folly, Fifth of July, A Delicate Balance, The Heiress, The Last Night of Ballyhoo, Ain’t Misbehavin’ and Abe Lincoln in Illinois. Off-Broadway credits include Dada Woof Papa Hot, Shows for Days, The City of Conversation, and Much Ado About Nothing and King Lear in Central Park. Designer of more than 100 Broadway shows, he is the recipient of multiple Tony, Obie, Outer Critics Circle and Drama Desk Awards, and is a member of the Theater Hall of Fame.

ROB MILBURN & MICHAEL BODEEN (Original Music and Sound Design)’s Broadway credits include music composition and sound for No Man’s Land, Waiting for Godot, Breakfast at Tiffany’s, The Miracle Worker, One Flew Over the Cuckoo’s Nest and The Speed of Darkness; music for My Thing of Love; and sound for Larry David’s Fish in the Dark, This Is Our Youth, Of Mice and Men, Who’s Afraid of Virginia Woolf?, Superior Donuts, Reasons to be Pretty, A Year with Frog and Toad, King Hedley II, Buried Child, The Song of Jacob Zulu and The Grapes of Wrath. They have also created music and sound Off-Broadway, at many of America’s resident theaters (often with Steppenwolf Theatre) and at several international venues. www.milbomusic.com

U. JONATHAN TOPPO (Fight Director)’s previous credits as fight director include Pericles at Folger Theatre, Guys and Dolls at the Wallis Annenberg Center for the Performing Arts, The Great Society at Seattle Repertory Theatre and The Pirates of Penzance at Portland Opera. He is the resident fight director at Oregon Shakespeare Festival.

REBECCA WEAR (Associate Director)’s previous credits include If the Saints (Metro Baptist), Obedient Steel (HERE) and I Run with You (Women Center Stage). She has previously assisted Jerry Ruiz, Stew and Kate Whoriskey. Rebecca has worked with Under the Radar, is an associate artist with The Orchard Project, and is currently pursuing a Ph.D. at University of California, Santa Barbara.

MOLLY HOULAHAN (Assistant Director) is currently the Bret C. Harte directing fellow and assistant to the artistic director at Berkeley Repertory Theatre. As the directing fellow, Molly has assisted Sean Graney on The Hypocrites’ The Pirates of Penzance and will assist Daniel Sullivan on Macbeth starring Frances McDormand, Mary Zimmerman on Treasure Island and Les Waters on Sarah Ruhl’s For Peter Pan on her 70th Birthday. She previously worked with The Public and Steppenwolf Theatre Company. Her directing work has been featured in FringeNYC, TinyRhino Short Play Festival and New York Theatre Workshop’s Jonathan Larson Lab. Molly is a graduate of Yale University where she won the Louis Sudler Prize for Excellence in the Performing and Creative Arts. She is thrilled to return to Sweat after working on it at Oregon Shakespeare Festival. 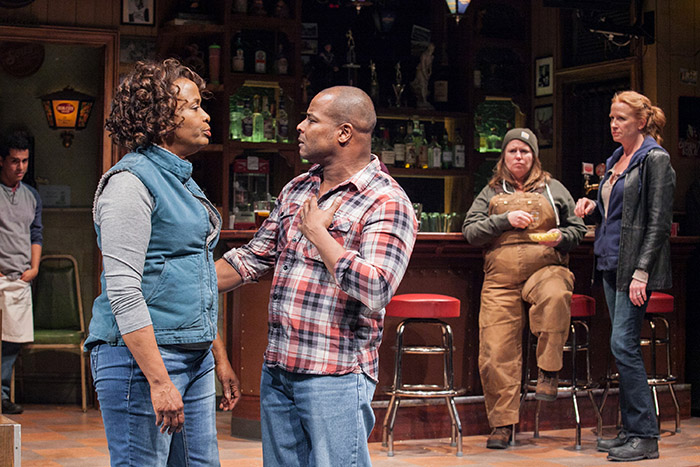 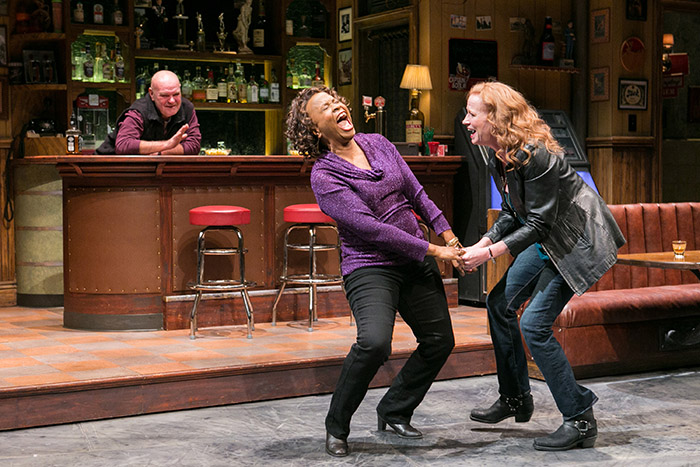 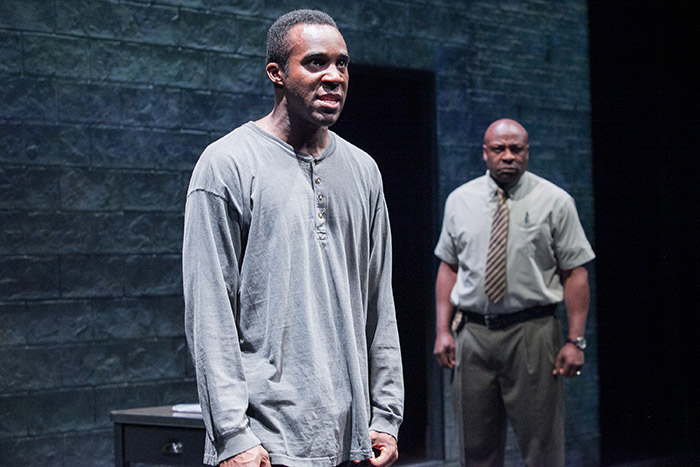 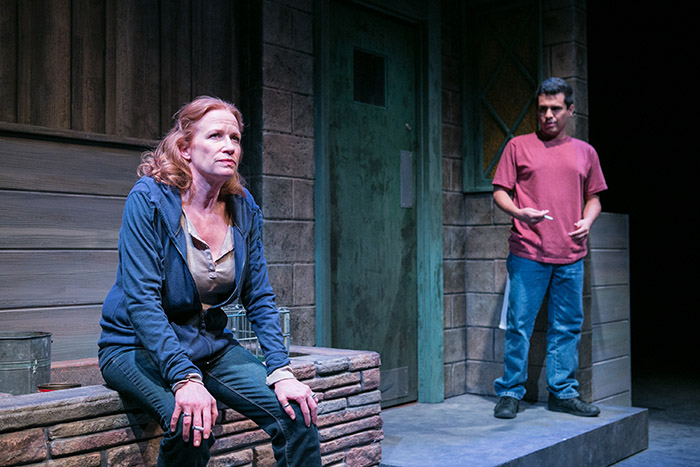 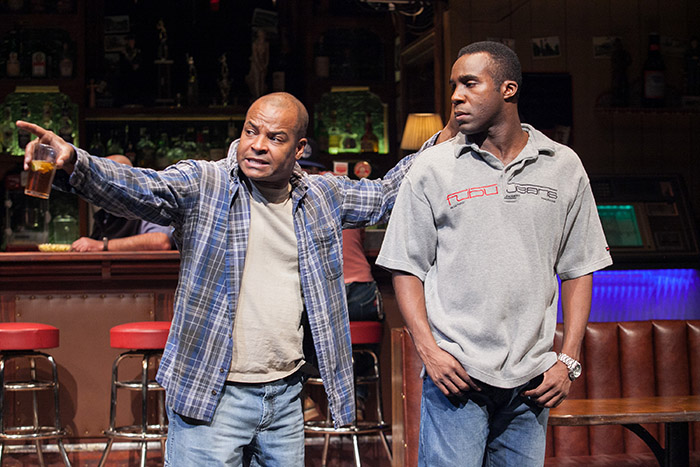 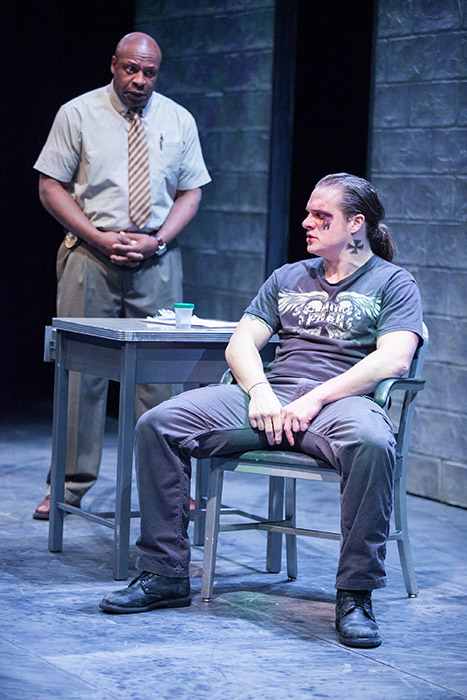 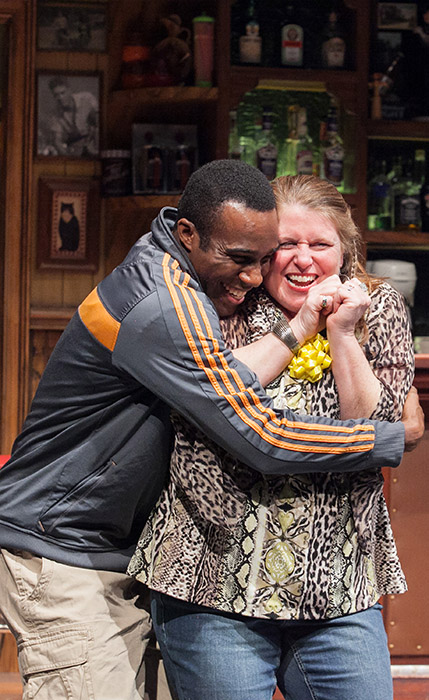 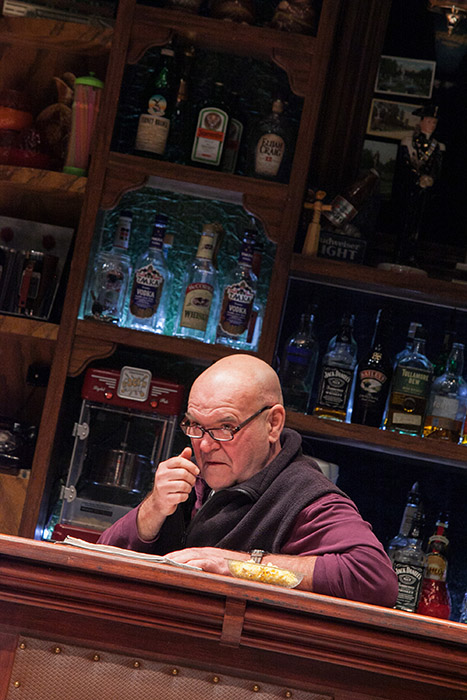 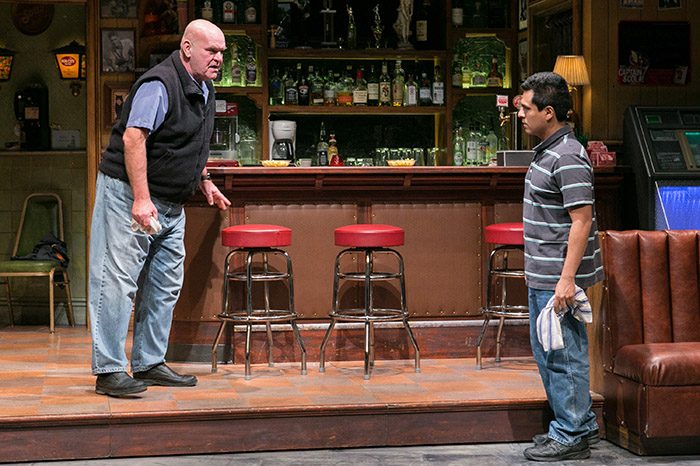 The City of Conversation