Registration for the Summer 2021 Virtual Audition Intensive is now open!

“The Virtual Audition Intensive gives young artists the opportunity to work with gifted theater professionals from all over the nation to learn the art and business of the audition process.”- Anita Maynard-Losh, Director of Community Engagement and Senior Artistic Advisor

Students will leave having worked on a contemporary monologue, a Shakespeare monologue, two contrasting songs, and a private conference on their headshots and resumes.

The program is for serious, focused students and young artists ages 16-22.

No audition required. Enrollment is limited to no more than 20 students, and is first come, first served.

Upon registration, students will be sent information on preparing a short song and monologue and uploading before the program starts. This is not an audition but a way for the faculty to get to know the students in advance to help tailor the program to the students. Please click here to view a list resources and details needed for submission.

The day is structured with a daily musical theater dance session, singing training, acting training and group sessions on a variety of audition subjects, such as choosing audition material, headshots and resumes, working with an accompanist, cold readings, taking direction at an audition, navigating dance auditions, and more.

Read more about the intensive, tuition and paperwork. 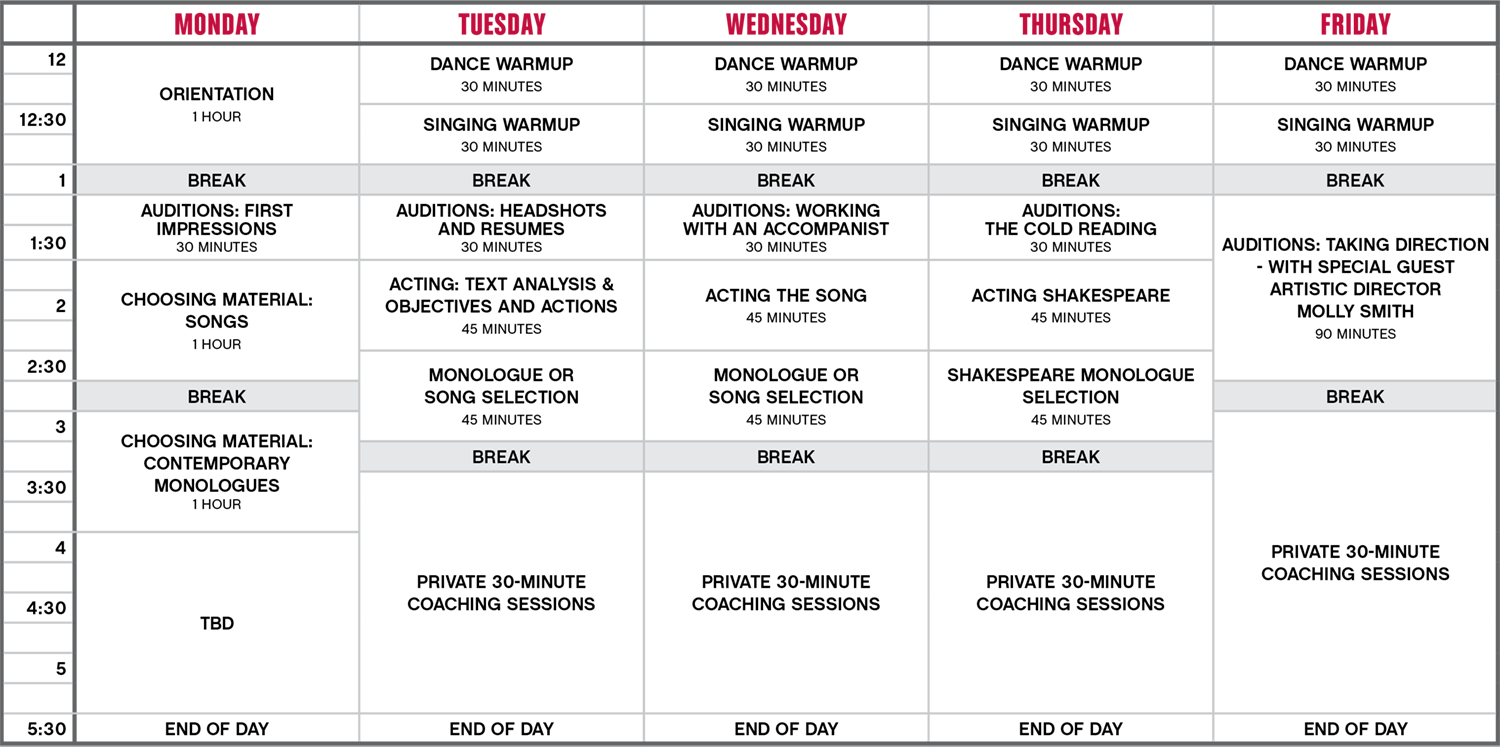 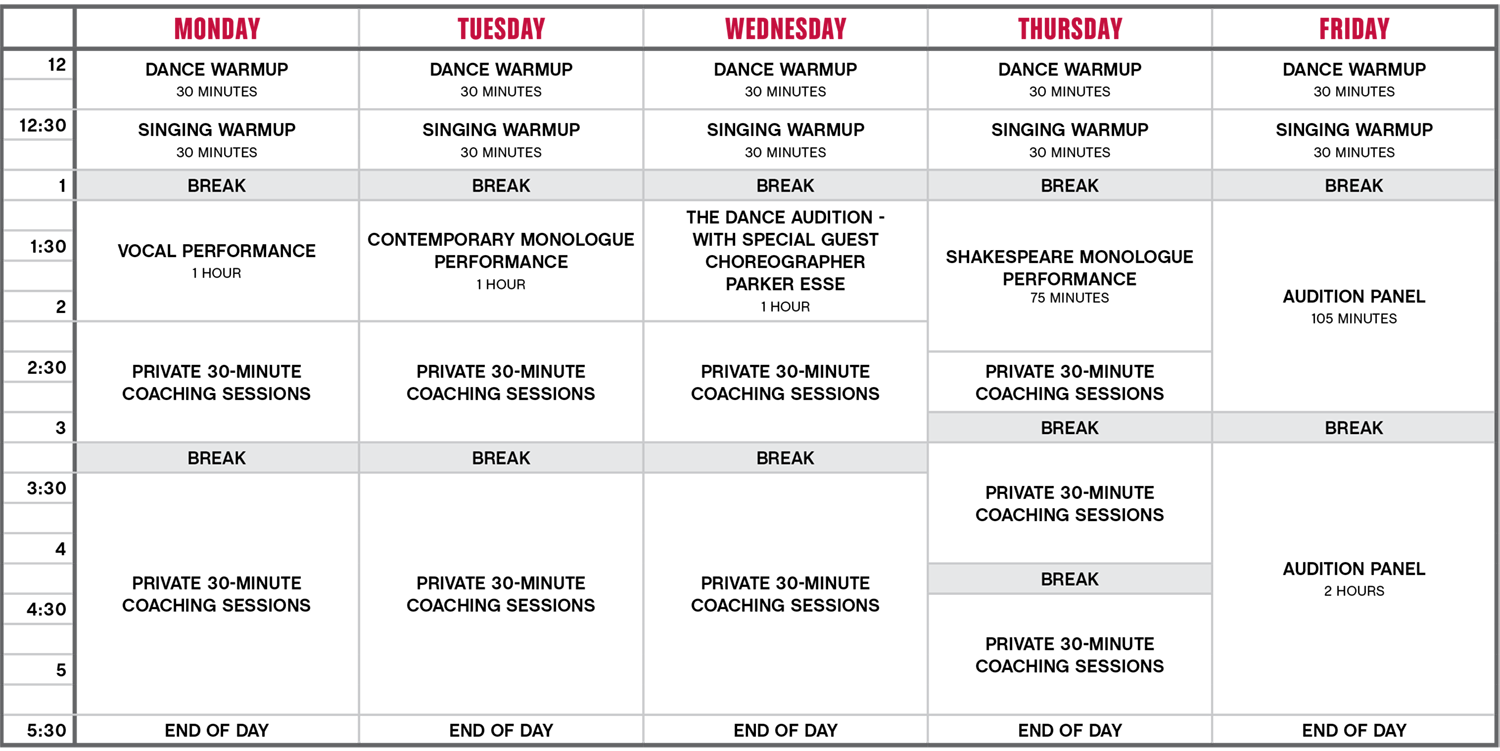 Please use the links below to access sheet music and recorded accompaniment for prep songs and for monologues.

Nathan Beary Blustein is a professorial lecturer of musical theater in the Department of Performing Arts at American University. He serves as music director for AU productions, which most recently include Too Much Unhappy and Miss You Like Hell. Dr. Blustein completed his Ph.D. in Music Theory at Indiana University last August. His dissertation is titled “Through Arrangements of Shadows: Experiences of Reprise in Stephen Sondheim’s Leitmotivic Musicals.”

Caroline Stefanie Clay is an actress, audiobook reader, playwright and vocal coach. She has appeared on Broadway in the Tony Award-winning productions of The Little Foxes, Doubt and The Royal Family. Her extensive film and television credits include a recurring featured role on Grey’s Anatomy as CeCe Clovin. A native Washingtonian, Clay graduated from the Duke Ellington School of the Arts, where she also teaches, and the University of the Arts in Philadelphia. She earned her M.F.A. in Performance at the University of Maryland and received a 2018 Helen Hayes Award nomination for Best Actress in Dominique Morrisseau’s Skeleton Crew. In 2020, Clay was the recipient of the NAACP Award for Best Actress in A Play, for the same role. Visit her at www.claycreatives.org

DAVID ROWEN is a Helen Hayes Award-nominated actor and musician based in New York City. Originally hailing from Northern Virginia, he has performed at theaters, including Signature Theatre, Shakespeare Theatre Company, Studio Theatre, Olney Theatre Center, Adventure Theatre MTC, and Toby’s Dinner Theatre. He appeared Off-Broadway in Bob Marley's Three Little Birds, and he was in the world premiere production of Barry Levinson and Sheryl Crow's musical, Diner, helmed by Tony Award winner, Kathleen Marshall. David is the producer of the music YouTube channel, davidrowen/creative, which features his unique arrangements and covers of pop and Broadway songs in music video form. His work as been praised by Playbill, Broadway.com, BroadwayWorld, and award-winning composer, Stephen Schwartz. David is a classically trained singer and pianist, and a self-taught guitarist. He regularly freelances as a music director, accompanist, music producer, and video director/editor. He specializes in a cappella and piano/vocal arrangements and transcriptions, his a cappella arrangements have been featured on the Best of College A Cappella, and Voices Only compilation albums. David performs worldwide with the USO Show Troupe, and he sings in the a cappella trio, Iris, who won Varsity Vocals' 2018 International Championship of A Cappella at Carnegie Hall. He has also been a soloist for the El Paso Symphony Orchestra and Firelands Symphony Orchestra.

TERESA SAPIEN joined Arena Stage's artistic staff in 2019, after seven seasons at La Jolla Playhouse, most recently as Associate Producer. At the Playhouse she helped guide over fifty productions on the mainstage and out in the San Diego community, including new plays by Martyna Majok, Will Power and Hansol Jung. She was the curator and producer of the 2019 Without Walls Festival of site-based and immersive theater which hosted over twenty international and American companies. As the co-producer of the annual DNA New Work Series, she supported the development of over thirty-eight new plays and musicals. In addition to producing, she was the Playhouse’s local casting director for numerous plays and musicals, including the world premieres of Wild Goose Dreams, Junk and Come From Away. She is a reader for The Playwrights Realm, Playwrights’ Center Minneapolis, Native Voices at the Autry and a proud contributor to the Kilroys’ List. Sapien is a graduate of the University of Evansville’s Theatre Department.

CHAZ WOLCOTT is a theatremaker based in New York City. You may remember Chaz as Race in Disney’s Newsies at Arena Stage in 2019. His director/choreographer credits include Broadway: Red Bucket Follies (New Amsterdam Theatre), Gypsy of the Year, and Broadway Backwards (Al Hirschfeld Theatre); Regional: Priscilla Queen of the Desert, Crazy for You, Cats, Newsies (5x), Me and My Girl, Bright Star, La Cage aux Folles, Kiss Me Kate, Altar Boyz and Mamma Mia. Chaz has created & directed numerous benefit concerts for Broadway Cares/Equity Fights AIDS from coast to coast. As a performer, Chaz is perhaps best known for his work in Disney’s Newsies: The Broadway Musical, now available on Disney+. He’s also been seen on the National Tour of Cats (Mr. Mistoffelees), the First National Tour of Disney’s Newsies (Buttons), and in Me and My Girl for NY City Center Encores! Chaz has been featured on FOX’s hit show So You Think You Can Dance. Chaz serves on faculty at Broadway Dance Center and Steps On Broadway in NYC. Chaz earned his BFA in Dance from Oklahoma City University and is a MFA in Theatre candidate at the University of Idaho. More about Chaz can be found at www.chazwolcott.com or @dancinchaz! 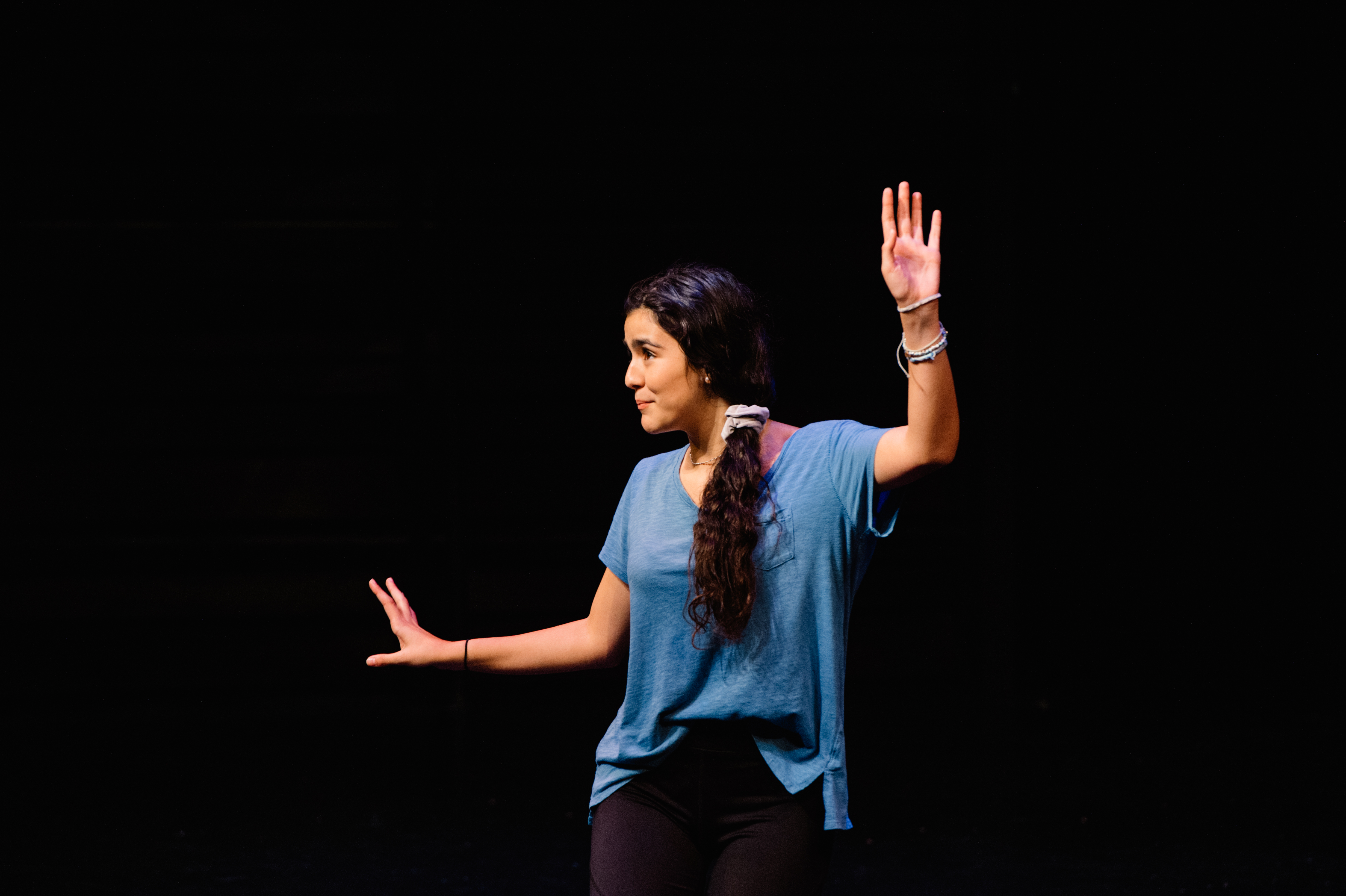