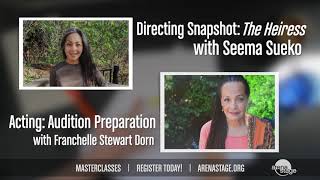 Get a peek into the offstage work that helps create the magic that you see onstage. Led by long-time Arena Stage collaborators, you will see examples of their work, hear stories about the people they’ve worked with, and have a chance to ask questions in this 90-minute insider glimpse.

Registration is available through the day of the lecture. The series is open to everyone, but designed specifically for theatergoers interested in learning more about the process of making theater.

Rebecca is in her 17th season in Arena Stage’s Community Engagement Division, where she is the school programs manager, co-camp director and a teaching artist. She manages the D.C. Ticket Partnership, the theater’s ticket program for D.C. public and public charter schools, teaching workshops in dozens of D.C. schools each season. She edits the theater’s study guides and curriculum connections. She also directs and devises theater for social change for Arena’s Voices of Now program both locally and internationally. Rebecca is an annual guest artist at the University of Notre Dame, specializing in teaching how to write 10-minute plays. She holds a dual honors B.A. in English literature and journalism from St. Bonaventure University. She begins her masters in writing (fiction) at Johns Hopkins University in 2021.

Otis Cortez Ramsey-Zöe is a care worker, dramaturg, director and theatre arts educator. He is an Adjunct Instructor in Dramaturgy at Carnegie Mellon University and Junior Lecturer in Women’s Studies at University of Maryland. He has developed new works at such institutions as Sundance Institute, The Kennedy Center, Alabama Shakespeare Festival, Playwrights Center, National New Play Network, Theater Alliance, The Classical Theatre of Harlem and Arena Stage. He was an Adjunct Instructor in Performing Arts at American University, Lecturer of Theatre Arts at Howard University, Associate Artistic Director at banished? productions, Future Classics Program Coordinator at The Classical Theatre of Harlem and Literary Manager at Center Stage. He holds degrees from New York University and the University of Notre Dame.

Arena Stage Costume Director Joseph P. Salasovich has worked for 20 seasons in various capacities on over 150 productions. He most recently designed costumes for Molly Smith's Snow Child as well as Mother Courage and Her Children and the world premiere of The Originalist.

Jenn Sheetz has been Arena Stage’s Properties Director for the past 2 seasons after twelve seasons as Properties Director at Woolly Mammoth Theatre Company. She began her theatrical career at Arena Stage, working as a Properties Assistant for 9 seasons in the Kreeger Theater. She has also designed properties for Norwegian Cruise Line (Rock of Ages, Legally Blonde, Million Dollar Quartet), Comedy Central, and Showtime.