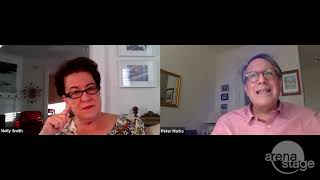 While it has been scary and challenging, this is also an exciting time to be an artistic director. We have journeyed together into new realms online, expanding our horizons and capturing what we all love about theater in a virtual setting.

Now it’s great to look forward to what’s happening back in the Mead Center. When an artist creates a performance and then it has to pause, the artistry deepens and grows. We’ll experience magical depth in the 2020/21 Season, as well as electrifying new musicals with soaring scores that will take our breath away.

Can one woman change the mind of a man and the fate of a nation? Fidel Castro’s most trusted confidant and political partner, Celia Sánchez, is never far from his side as he grapples with how to move his country forward. It’s 1980 and a failing economy has led 10,000 Cuban citizens to seek asylum at the Peruvian Embassy in Cuba. Castro must decide what kind of a leader he wants to be: merciful or mighty. Imbued with magical realism, Arena Stage’s seventh Power Play imagines a conversation between Cuba’s most influential female revolutionary and its most notorious political leader in a contest between morality and power.

Considered a pioneer, Toni Stone is the first woman to play baseball in the Negro Leagues, also making her the first woman to play professionally in a men’s league in the 1950s. Against all odds, Stone blazes a path in the male-dominated sports world, shattering expectations and creating her own set of rules. Based on Martha Ackmann’s book Curveball: The Remarkable Story of Toni Stone, the latest work from award-winning playwright Lydia R. Diamond (Smart People, The Bluest Eye) tells the dynamic and uplifting story of Stone’s journey of perseverance and resilience just to do what she loved the most—play baseball.

The 1940s Pittsburgh is the backdrop for August Wilson’s fifth cycle play and the second production in the August Wilson Festival. Seven lives are interconnected when old friend and blues singer Floyd Barton vows to turn his life around after a surprise windfall leaves him hopeful for a second chance. Infused with deep and soaring blues rhythms, this “rich and exceptionally vivid” (Variety) play pits the desire for a better future against the harsh realities ultimately leading to heartbreaking and inescapable circumstances.

Charles Randolph-Wright (Arena's Born for This: The BeBe Winans Story, Broadway's Motown the Musical) returns to Arena Stage with a ground-breaking musical about Frederick Douglass, portrayed by Cornelius Smith Jr. (ABC's Scandal, All My Children). Douglass' own words power the soaring new melodies and original script from Grammy Award-winning songwriter Marcus Hummon and Randolph­Wright. This daring and heart-stirring new work presents Douglass as a fierce abolitionist and distinguished orator featuring interactions with key figures including, President Abraham Lincoln, activist John Brown and Douglass' wife, Anna Murray-Douglass, without whom his defiant escape from slavery would not have been possible. Filled with electrifying new songs including, "What Does Freedom Look Like," "We Need a Fire" and "A More Perfect Union," this world premiere celebrates the revolutionary legacy of one of history's first freedom fighters.

Additional support is provided by Sandy and Jon Willen.

Grieving the recent loss of her famous father, 16-year-old Alice begins to question the events surrounding his death and sets out to uncover what really happened on the night that changed her family forever. With a soaring and gorgeous score, Britta Johnson’s Life After is a bittersweet and witty new musical that explores the mess and beauty of loss and love. Through the vivid imagination of a young woman looking for the facts, we find a more complicated truth instead. The “startlingly talented” (The Toronto Star) playwright and composer Johnson delivers “musical theater perfection” (Broadway World) in this compelling and “life-affirming” (Talkin’ Broadway) journey.

As a subscriber, you enjoy the following benefits and many more:

Up to 60% off single ticket prices!

Can't make your date? Contact us up to 24 hours before your show and exchange to another performance of the same production for free. Charges only apply if you transfer to a more expensive seat.

An Arena Stage exclusive – even when you accidentally miss a show, Team Arena can work with you to get you into another performance with a Complimentary Standby Seat. This offer is good for all subscription shows.

Contact our Sales Office to set up a schedule allowing you to pay for your subscription in easy monthly installments.

Subscribers enjoy extra discounts to make every visit the best it can possibly be.

Due to its smaller size, productions in the Kogod Cradle sell out quickly. Full-season subscribers have exclusive access to these shows before single tickets go on sale.

Receive advance notice on special events, exclusive update from our artistic team and priority access to single tickets. And don't forget, your tickets are insured – if you lose them, we replace them free of charge.

*Prices include a $10 subscription handling fee per subscription. All tickets include $5 per ticket facility fee. Prices, plays, dates and artists are subject to change.

As much as we are certain of our commitment to resume production, we know we are in uncertain times. Rest assured that if for any reason we must cancel performances, or if you are unable to attend, we will honor your commitment to us by offering a full array of ticket exchange and refund options.

Getting to Arena Stage

From on-site parking to public transportation, getting here is easy!
Learn More

As we prepare to welcome audiences back to the Mead Center, please read our promises to ensure the health and safety of our patrons, artists and staff.
Learn more