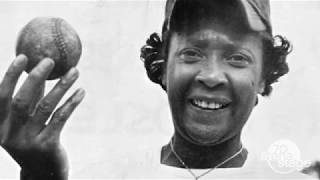 “[Diamond] is a powerfully smart writer”

Considered a pioneer, Toni Stone is the first woman to play baseball in the Negro Leagues, also making her the first woman to play professionally in a men’s league in the 1950s. Against all odds, Stone blazes a path in the male-dominated sports world, shattering expectations and creating her own set of rules. Based on Martha Ackmann’s book Curveball, The Remarkable Story of Toni Stone, the latest work from award-winning playwright Lydia R. Diamond (Smart People, The Bluest Eye) tells the dynamic and uplifting story of Stone’s journey of perseverance and resilience just to do what she loved the most — play baseball.

Toni Stone is generously sponsored by

and Sue Henry and Carter Phillips.

DANIEL J. BRYANT (Spec) is excited to reprise his role from last year’s world-premiere production at Roundabout Theatre Company. Daniel’s West Coast credits include Lynn Nottage’s Las Menina (San Jose Repertory Theatre) and Slide Glide the Slippery Slope (Mark Taper Forum). Regionally, his credits include: Broken Fences (16th Street Theater); “Master Harold” …and the Boys (TimeLine Theatre); and Topdog/Underdog, True West and The People’s Temple (American Theater Company). At Congo Square Theatre, where Bryant is an ensemble member, he was featured in The Talented Tenth, Joe Turner’s Come and Gone and Stick Fly, originating the role of Spoon. Other credits include: Vivisections from the Blown Mind and By the Music of the Spheres (Goodman Theatre); Wheatley and Fashion (Victory Gardens Theater); and A Clockwork Orange (Steppenwolf Theatre Company). Daniel is also a voice-over artist, director and a proud member of AEA, SDC, AFTRA and SAG.

KENN E. HEAD (Millie) is thrilled to be part of this production of Toni Stone. He has worked on numerous plays at many theaters over his career. To name a few: Steppenwolf Theatre Company, Yale Repertory Theatre, Goodman Theatre, Chicago Shakespeare Theater, Next Theatre Company, American Theatre Company and Victory Gardens Theater. His television credits include: The Chi, Chicago Med, Empire, The Exorcist, Chicago Fire, Early Edition and ER. He is also particularly proud of some indie films of which he has been part, including Once Upon a River, the Festival Circuit and The Chosen.

RODNEY EARL JACKSON, JR. (Elzie) made his Broadway debut in The Book of Mormon and was last seen at Berkeley Repertory Theatre in the world premiere of Ain’t Too Proud: The Life and Times of the Temptations. He traveled in the first national tour of Motown: The Musical. Jackson is a San Francisco native who built his love and foundation for arts and theater in public city organizations, such as San Francisco Arts Education Project, San Francisco Recreation and Parks, Young People’s Teen Musical Theatre Company and the Ruth Asawa San Francisco School of the Arts. He is the co-founder/artistic director of the San Francisco Bay Area Theatre Company (SFBATCO), a five-year-old nonprofit whose mission is to produce live theater that reflects the experiences of the Bay Area’s historically and currently marginalized communities and creating mentorships that aspire to engage a new generation of live theater supporters. (he/him) @rodneyearljacksonjr

DAWN URSULA (Toni Stone) last appeared at Arena Stage as Ruth in A Raisin in the Sun and Desiree in Love in Afghanistan. A resident company member with Everyman Theatre, she most recently appeared as Mame in Radio Golf. Also a resident company member with Woolly Mammoth Theatre Company, she most recently appeared there as Madre Maria in Botticelli in the Fire. Other credits include: the Angel in Angels in America 1 & 2 (Round House Theatre and Olney Theatre Center) and Grace Kumalo in Lost in the Stars (Washington National Opera). She has received two Helen Hayes Awards and thrice been nominated. On-camera credits include Isabella in PBS’ Prince Among Slaves and Mrs. “Bunny” Colvin on HBO’s The Wire. Pronouns: she/hers. Private coach: Vera Katz Instagram: @dawnursula, www.dawnursula.com.

MacKinnon is an alumna of the Drama League, Women’s Project Theater and Lincoln Center Theater’s Directors Labs. She is an Associate Artist of Roundabout Theatre Company, Executive Board President of the Stage Directors and Choreographers Society (SDC) and former chair — and now advisory board member — of Clubbed Thumb, a New York downtown theater company dedicated to new American plays.

BROKEN CHORD (Sound Design and Original Music) Arena Stage credits include Kleptocracy and Frankie and Johnny in the Clair de Lune. Broadway credits are The Parisian Woman, and Eclipsed. Off-Broadway credits include Toni Stone at Roundabout Theatre Company; The Lying Lesson at the Atlantic; OZET at Incubator Arts; Bull in a China Shop at LCT3; Party People at The Public. Selected regional credits are Angels in America at The Repertory Theatre of St. Louis; Enemy of the People at the Guthrie Theatre; Ruined at Berkeley Repertory Theatre; Top Girls at the Huntington Theatre; UniSon at OSF; Macbeth at Shakespeare Theatre Company. Film credits include Fall to Rise. www.brokenchord.us

ELISA GUTHERTZ (Stage Manager) has been a San Francisco Bay Area stage manager for over 27 years. She stage managed Toni Stone at American Conservatory Theater. Some of her recent A.C.T. include, Testmatch, Rhinoceros, Seascape and Sweat. She has stage-managed A Thousand Splendid Suns at A.C.T., The Old Globe, and Theatre Calgary. She has also worked on many shows for Berkeley Repertory Theatre. Other credits: The Good Body with Eve Ensler at the Booth Theater on Broadway. Big Love at Long Wharf Theatre, Goodman Theater and Brooklyn Academy of Music. The Vagina Monologues with Eve Ensler at Alcazar Theatre.

Big-League Baseball’s First Woman, on a Stage of Her Own

For a new play about baseball, the actors needed a designated hitting coach